Below I have drawn a molecule with random substituents $\ce{X}$ and $\ce{Y}$: 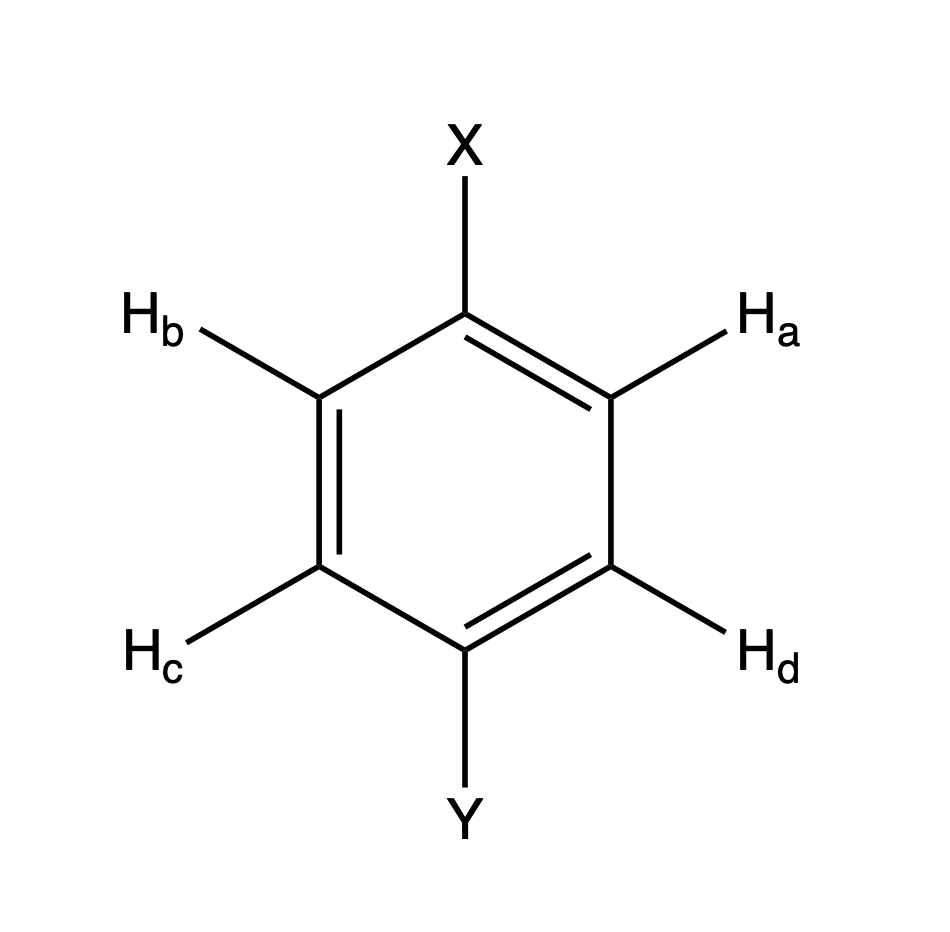 This led me to believe then that all the protons in the molecule are magnetically inequivalent and using up to $\ce{^4J}$ coupling, all protons show a doublet of doublet.

However, when I was in school, I was told that if symmetry was a property of a molecule, as above, $\ce{H_a}$ and $\ce{H_b}$ were equivalent, as are $\ce{H_c}$ and $\ce{H_d}$, and each pair of protons gives a doublet. Researching this matter on Google still held true in my undergraduate studies.

What am I getting wrong here?

I read a quote on another question highlighted here

For two nuclei to be magnetically equivalent, they need to have equivalent coupling to all other non-chemical shift equivalent nuclei in the molecule.

when I was in school, I was told that [...] each pair of [equivalent] protons gives a doublet

This is only strictly true for magnetically equivalent protons. If there is magnetic inequivalence, such as in the p-disubstituted benzene ring, then it is no longer true.

It's not as simple as a dd either; when you have magnetically inequivalent protons that see each other, the first-order rules (the so-called $n+1$ rule) doesn't work so well anymore. You can see some real-life examples of how these molecules look like here: https://www.chem.wisc.edu/areas/reich/nmr/05-hmr-15-AABB.htm For the p-disubstituted benzene it sort of looks like a doublet if you zoom out far enough, but if you look closely, there are additional peaks flanking the major peaks.

I say "see each other" because if you think about it, the two protons labelled HA above are also magnetically inequivalent; but since they are so far apart, the two benzene rings are essentially independent of each other, and give rise to the same NMR spectrum.

11
Why are all the phenyl protons in benzyl alcohol equivalent in the ¹H-NMR spectrum?
3
NMR: Magnetic and chemical equivalence in benzene
4
Naming the spin system present in ethyl butanoate
7
NMR Splitting for Adjacent, Equivalent Hydrogens?
2
1H NMR of p-methoxy phenol, 32 possible lines?
5
Proton NMR Spectrum for Nicotinic Acid
15
Where does magnetic inequivalence come from?
0
Protons on aromatic rings in NMR
4
NMR splitting of protons in a ring