pi-type bonding interaction along the bond

I was given the diagram of $\ce{BF3}$'s LUMO and asked to assess its bonding character as shown below:

Below is the model answer for the annotated version.

I managed to correctly answer the HOMO MO with the same annotations but was confused here slightly.

The LUMO Interaction shows a $\ce{p}$ orbital coming out of the plane, where the B p orbital is out of phase with the $\ce{F3}$ fragmnet orbitals, but the model answer suggests there is a $\ce{\pi}$ type bonding interaction.

This does not make sense to me. Unless mistaken, I thought the p-orbitals from the B and the F atoms (given they are out of phase) show along the bond $\ce{\pi}$ type antibonding properties, rather than $\ce{\pi}$-type bonding interaction. 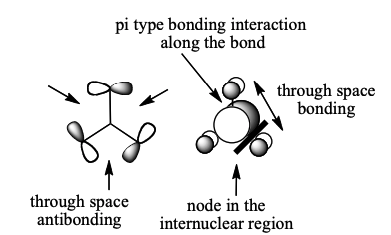 Am I correct or not? How is there $\ce{pi}$-type bonding interaction possible along the bond here?

Browse other questions tagged molecular-orbital-theory or ask your own question.

73
Bonding in diatomic C2, a carbon-carbon quadruple bond?
2
Which is More Stable with Boranes: Amines or Phosphines?
5
Hydrogen bonding relating to molecular orbital theory
15
Classifying some molecular orbitals after Hartree-Fock calculation
8
Significance of phase of atomic orbitals
14
Molecular orbital diagram for BF3
3
When is donation into an anti-bonding MO stabilising?
2
Hyperconjugation and the stability of alkenes
4
What can we learn from the energies of molecular orbitals?
1
Average energy concept