How to separate a racemic mixture of 1,2-diols

[upjohn dihydroxylation]2I want to ask that i synthesise R-substituted-1,2-Diol with (ee=1:1) ratio of R-, S- with the help of Upjohn Dihydroxylation. i try to seprate it by different mobile phasese but failed to separate, then i try -OTBS at primary alcohol by wish that may it work and make two seprate points at TLC but i failed, i need both R- and S- enantiomers of Diol. my question is that what possible method can i use to separate two diols completely or make enantio-selective diol by using different conditions like by Sharpless method.

The standard method for ketalization is illustrated in the reaction of cyclohexanone 1 with ethylene glycol to form the ketal 2. The reaction is reversible which requires irreversible removal of water shifting the reaction to the right. In this reaction the toluene/water azeotrope may be separated by a Dean-Stark trap. Because of an unfavorable equilibrium, hindered ketones, such as camphor 3, are more difficult to ketalize. Standard conditions may be employed in this instance using more efficient removal of water.1

Dauben, et al.,2 have demonstrated an alternative technique for ketalizing camphor and other hindered ketones by employing high pressure at ambient temperature as illustrated in 3 --> 4.3. To illustrate the resolution technique I have chosen (R)-camphor because it is hindered, inexpensive and recoverable. The full structure of your racemic 1,2-diol was not provided so I will employ racemic butan-1,2-diol to this end. There are four possible diastereomers that can be formed in the ketalization--namely-- 5, 6, 7 and 8. The (R)-diol can form ketals 5 and 6 while the (S)-diol can afford ketals 7 and 8. Because each pair is formed under equilibrating conditions, ideally one would hope that the less hindered of the 5/6 pair and 7/8 pair dominate such that a single ketal would arise for each of the enantiomers of the diol. The success of such a technique requires separation of diastereomers, presumably via chromatography, or, ideally, by selective crystallization. If the latter method were viable, an enantiopure diol can be liberated by acid hydrolysis. The enantiomeric diol would arise by utilizing (S)-camphor, which, unfortunately, is much more expensive than (R)-camphor. continued... 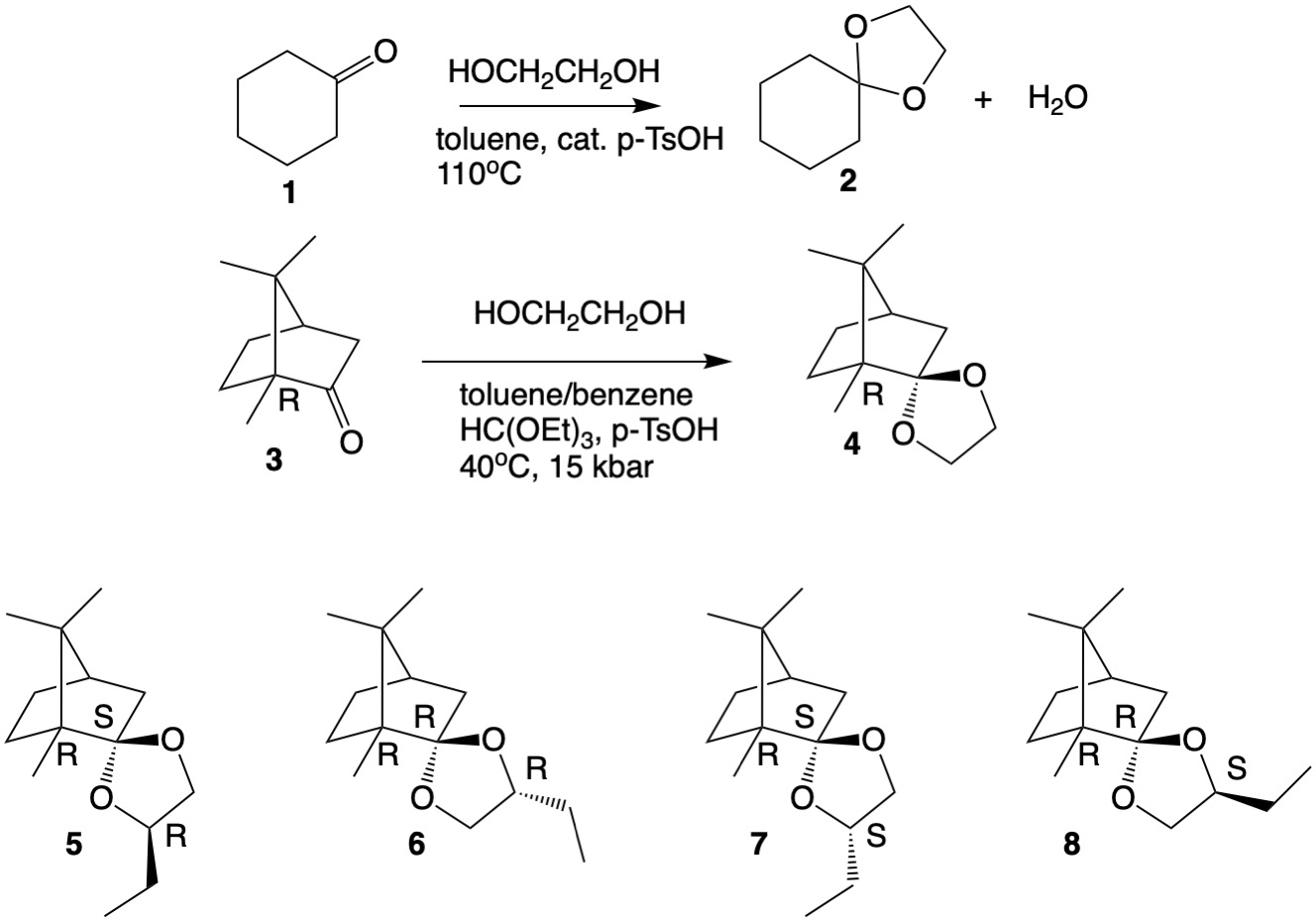 One need not be limited to camphor. Other hindered ketones may be considered. The methodology described here is not a guarantee of success. Conceptually, it is no different from Ladenburg's resolution of racemic coniine with tartaric acid in the 19th-century.

Not the answer you're looking for? Browse other questions tagged organic-chemistry stereoselectivity separation-techniques or ask your own question.