In kryptomerism assignment, there was a question to compare more stable tautomeric form between 4-pyridone (1) and 4-pyridinol (2): 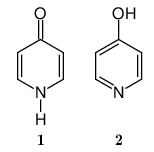 Though, not being convinced by his explanation, I have two questions. First, is the answer correct? And second, what's the reason if it's correct?

I don't think this is an either this or that situation. As with most of the equilibria we know it depends very much on the circumstances we look at it. Many examples of keto-enol-tautomerism are heavily influenced by the solvent. Due to time and resource restrictions I won't be able to go in as much detail as I did in explaining whether enolates get protonated at the carbon or oxygen atom, but I ran a few calculations showing some of the controversy.

The calculations were carried out using Gaussian 16 Rev. B.01 at the DF-B97D3(BJ)/def2-TZVPP level of theory, and thermal corrections were obtained from normal coordinate analysis (in the harmonic approximation) at the optimised structures at the same level of theory using $T=\pu{273.15 K}$ and $p=\pu{1 atm}$ (because that is the G16 standard, sorry for the non-SI). The polarisable continuum model was employed except for the gas phase. All energies are in $\pu{kJ mol^-1}$ for reaction \eqref{tauto}, which means that negative values indicate that 4-pyridinol is more stable than 4-pyridone and vice versa for positive values:* $$\ce{4-pyridinol <=> 4-pyridone}\tag1\label{tauto}$$

From this we can imply (although there are too few points) that in condensed phase 4-pyridone is the predominant species, while in vacuum it would be 4-pyridinol. Unfortunately, at this time I cannot offer a satisfactory (and easy) explanation for this. The values above have not been calibrated, they are a mere snapshot. I don't want to wander deep into hand-wavy territory and propose a rule of thumb based on bond energies and/or similarities to other molecules.

It is probably true that water is able to stabilise a possible negative charge at the oxygen and at the same time stabilising the positive charge of the proton bonded to nitrogen, but that's about as much of an educated guess I would like to give up.

I want to caution everybody with expressions like the aromatic form when referring to a resonance contributor. Aromaticity is a concept which applies to a (sub-) structure and as such to all resonance contributors. This is why both tautomers are aromatic regardless of the depiction chosen.
In a similar way I want to caution against the argumentation with bond energies. Whenever resonance comes into play, we will have fractional bond orders, which deviate significantly from the conditions under which the tabulated values have been measured (or calculated).

The above notes apply directly to the two reasons your friend offers:

There is neither an isolated $\ce{C=O}$, nor a $\ce{C=N}$ bond, as they are both part of the same π-system. The lone pairs cannot (directly) interfere with the π-system as they are orthogonal.

I wish I could offer you a better explanation, but with most chemistry there is nothing easy about simple systems.

This Article states the following about 4-pyridone in its abstract:

Aromatic resonance energies for 4-pyridone and its analogues are similar to those for the 2-pyridone series.

This means that in order to find out how 4-pyridone is so stable, all we have to do is take a look at it's sister, 2-pyridone. 2-pyridone and it's tautomeric form, 2-pyridinol have the following resonance structures respectively, as shown in this question.

The major reason of the stability of 2-pyridone is that Its aromatic form has the negative charge on the more electronegative element and the positive charge on the more electropositive element. More about the tautomerism of 2-pyridone can be found on Wikipedia, however for the purposes of this explanation I'll restrict myself to the above concept.

Applying this concept to the resonance of 4-pyridone and 4-pyridinol respectively, we obtain the following structures: 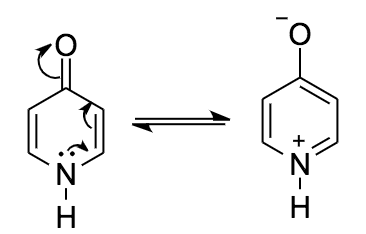 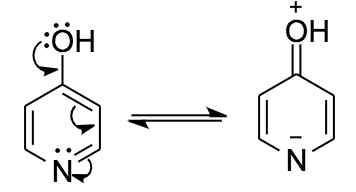 This answer does seem right. In the reaction I have drawn here, a similar logic prevails, you would be shocked to know that the equilibrium shifts to the right here in an ethanolic solution. The reason simply is the very high $\ce{C=O}$ bond energy. $\ce{C=O}$ has a bond energy of more than $\pu{100 kJ/mol}$ than the $\ce{C=N}$ and $\ce{C=C}$ bond energies (data from here). So, both these compound being aromatic, the debate of resonance energy dies, so it is a perfect explanation.

Here is a solid ACS paper[1] which says the same, the source for my claim even if you cannot access the paid version if you are not an ACS member, the first page is free, you can read clearly, that the mixture exists largely in the quinoid form.

On page 72 in the paper by Suzanne Slayden and Joel Liebmann titled The organic thermochemistry of hydroxylamines oximes hydroxamic acids and their derivatives, there is proof as well as justification of the same. 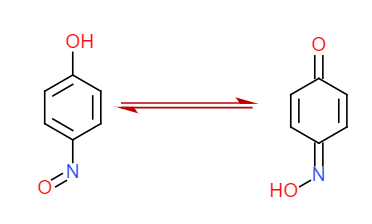 In this case, the dominance form of the compound depends on which phase it is in. Ref.1 states that:

In the gas phase, there is a preference of the hydroxy form in both 2- and 4-hydroxypyridine, while in a nonpolar solvents such as cyclohexane and chloroform, the two tautomers exist in comparable amounts. However, the two equilibria are shifted entirely to the right in favor of the oxo-form, 2- and 4-pyridone, respectively in polar solvents as well as in the crystalline state.

In general, pyridones (e.g., 4-pyridone) predominance strongly over their tautomeric hydroxy forms (e.g., 4-hydroxypyridine) can be rationalized by considering the mesomerism of the alternative forms. The charge-separated form of 4-pyridone (far left; negative charge on more negative oxygen), being aromatic, is greatly preferred over the nonaromatic, charge-separated form of 4-hydroxypyridine (far right; negative charge on relatively more positive nitrogen).

There are compilations about this type of keto-enol tautomerism. The freely available Tautobase for example is provided as searchable database in DataWarrior.

Not the answer you're looking for? Browse other questions tagged organic-chemistry aromatic-compounds isomers tautomer or ask your own question.

0
Phenol vs 4-hydroxypyridine - Enol Content
5
Resources for learning Chemistry
8
Do enolates get protonated at the carbon or oxygen atom?
8
Why is 4-hydroxypyridine more acidic than benzoic acid?
8
Why is the thione tautomeric form of 2-Mercaptopyridine favoured?
9
Why is quinone mono oxime more stable than 4-nitrosophenol?
3
2-Pyridone tautomer ratio
-1
Is a tautomer's stability compared with refernce to its initial compund
1
Which compound will have the most stable enol form?

8
SN1 reactivity order
9
Why Birch reduction of alkyne is E-selective?
8
Why is the thione tautomeric form of 2-Mercaptopyridine favoured?
5
What is the pKa of methylamine
4
The pyridine/benzene stability 'paradox'?
5
What is the most stable structure amongst the keto-enol tautomers of pentane-2,4-dione?
0
Stability of Gauche and Anti form in conformational Isomerism
3
2-Pyridone tautomer ratio