Determining the oxidation state of a bridging platinum complex

I want to ask a question about determining the oxidation state of a Platinum complex.

I was presented today with the following complex and asked to comment on the oxidation state and hence the d-orbital configuration of the central metal ion: 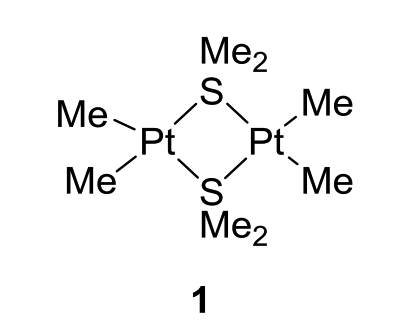 My working was as follows:

The $\ce{Me}$ groups do not contribute to any charge.

The $\ce{SMe2}$ ligands are neutral similar to $\ce{H2O}$ and don't contribute to any charge either.

However, if I take this into account, this would therefore mean that each Platinum central metal ion has the same magnitude of charge, but in opposite magnitudes i.e. $-2$ or $+2$ and this is not valid chemistry.

The answer given is +2 for both metal centres but I was unsure using the approaches above whether this was valid.

What other steps am I missing to reach the final oxidation states of the $\ce{Pt}$ centres?

For organometallic complexes it's often easier to throw the "more electronegative element" idea out entirely and focus on the characteristics of the ligands. This is what @andselisk's comment is referring to. Generally ligands are partitioned into two types, $\ce{L}$ and $\ce{X}$:

Other ligands can be constructed as sums of these: so for example η4-butadiene would be $\ce{L2}$ (two pi bonds coordinating to the metal), an allyl group would be $\ce{LX}$ (one pi bond plus one anionic centre - ignore resonance), and so on.

As another example, the platinum in Zeise's salt has one L ligand (ethylene), three X ligands (chloride), and a negative charge: so its oxidation state is $-1 + 3 = +2$.

Of course, this method will fall apart very quickly when there are non-innocent ligands: $\ce{NO}$ and $\ce{O2}$ are the examples that come to mind, although there are many more. But for relatively simple complexes they suffice.

There is a very similar molecule in the literature this has aryls instead of methyls. (MEYTEP)

We also have the dimethyl compound with bridging dimethyl sulfide ligands. (XOFNUB)

Datong Song, Suning Wang, J.Organomet.Chem., 2002, volume 648, page 302 which is the compound which the poster was asking about. In the Cambridge database this is considered as Pt(II). The authors regard it as being a Pt(II) compound.

I would vote for it being a Pt(II) compound as the methyl is likely to be an anionic ligand. But there is a big "but".

Back to our Pt compound, if we consider the methyl ligands to be neutral then the Pt can be in the zero oxidation state the dimethyl sulfide is a ligand which can offer up a lone pair to a metal.

If you go by the "ionic" counting method, we can start by looking at the charge on the ligands:

-For SMe2, the covalent bond to the methyl groups completes its full shell-no need to assign it a charge as it is happy being bonded with the methyls (doesn't need electrons from the metal).

Going further, we can assume sulfur is a 2-electron donor with each bond it makes to a metal centre as it still has 2 lone pairs free for donation.

Although this breaks the 18 electron rule, this is fine for 5d square planar and we know the complex will take square planar geometry at each metal centre from crystal field theory as it is a 5d metal with d8 configuration.

Not the answer you're looking for? Browse other questions tagged coordination-compounds oxidation-state or ask your own question.