I kindly ask for a reference for the following claim about potassium cyanide, found at potassium.atomistry.com:

It is also obtained by the action of a mixture of steam and nitrogen on potassium carbonate.

I'd be very interested to know the temperatures required and yields obtainable, and of course if this works at all.

I did some literature research and I wasn't able to find any methods involving steam (as water in the gas phase) for the synthesis. This in fact makes sense as alkali metal cyanides are prone to hydrolysis and tend to decompose to formate $\ce{K(HCOO)}$ over time or in hot water:

which further decomposes to potash $\ce{K2CO3}$ upon further heating, so presence of water, especially at elevated temperatures, appears to be highly undesirable for the synthesis of cyanides.

I suspect the aforementioned article contains a typo. Probably it should read "stream of nitrogen" — then it would make more sense as there are several industrial processes utilizing atmospheric nitrogen fixation for making cyanides with coal proposed in late XIX – beginning of XX centuries.

First, there is a German patent by Caro issued around 1900 (I couldn't find the full text or the exact date) mentioning synthesis of the cyanides of group 1 and 2 elements from carbonates using nitrogen and coal [1].

The Bucher process, as known, consists in heating a mixture of sodium carbonate, charcoal, and iron powder (catalyst) in a stream of nitrogen at a temperature above 900°. The reaction is written as follows:

[…] A stream of nitrogen was passed through the tube while a certain temperature between 900° and 1000° was maintained for several hours. The reaction product was rapidly cooled by lifting the tube out of the furnace without interrupting the flow of nitrogen and was then examined microscopically. In all experiments sodium cyanide, together with some of the ingredients of the original mixture, proved to be present, which confirms the reaction given by Bucher.

There is also a brief overview of industrial methods used for manufacturing alkali metals cyanides throughout the past 170 years in Ullmann’s Encyclopedia of Industrial Chemistry [4]:

1850s–1900s: semi-industrial process (aka "the blood process") of fusion of potassium carbonate with potassium hexacyanoferrate(II) (obtained from animal blood and waste) initially proposed by F. and E. Rodgers [5].

1960s–present sodium and potassium cyanides are produced exclusively by the neutralization process, between a solution of sodium or potassium hydroxide with liquid or gaseous hydrogen cyanide:

Gaseous or liquid $\ce{HCN}$ is first introduced continuously into concentrated solutions of $\ce{NaOH}$ or $\ce{KOH}$ at elevated temperature. The heat of neutralization is used for the subsequent vaporization of water. The use of special mixing devices and the addition of $0.2–3\%$ excess $\ce{NaOH}$ prevents polymerization. Simultaneously or in a second step, water is vaporized under reduced pressure and the alkali metal cyanide is precipitated below $\pu{100 °C}.$ The shorter the residence time of the cyanide in solution, the cleaner the product and the lower the content of hydrolysis products and iron impurities. 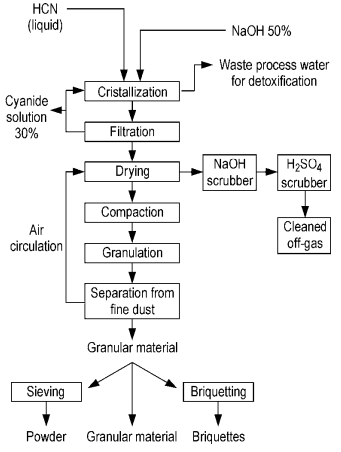 The complete paragraph, of which you took a particular phrase, reads:

The Potassium cyanide, $\ce{KCN}$, is manufactured by methods similar to those employed for the corresponding sodium derivative. Potassium ferrocyanide is heated either in absence of air, or with potassium carbonate and charcoal, or with sodium, the potassium cyanide being extracted by lixiviation with water or dilute alcohol. It is also obtained by the action of a mixture of steam and nitrogen on potassium carbonate or carbide, the manufacture of cyanides by the aid of atmospheric nitrogen being now an important industrial process.

This so-called process, the manufacture of cyanides by the aid of atmospheric nitrogen, is well documented in the book by John Edward Clennell, titled The cyanide handbook (Ref.1). For your convenience, I'd write the sub-chapter titled Production of Cyanides from Atmospheric Nitrogen:

It was observed by Scheele that when nitrogen is passed over a mixture of $\ce{K2CO3}$ and charcoal heated to redness, a cyanide of potassium is formed. Many attempts were made throughout the nineteenth century to utilize this reaction for industrial purposes. One of the earliest was that of Possoz and Boissiere, who used a mixture of charcoal with 30 per cent. of potassium carbonate. This was kept at a red heat in fire-clay cylinders, through which a mixture of $\ce{N}$ and $\ce{CO}$, produced by passing air over red-hot alkalized carbon, was allowed to pass for about $\pu{10 hours}$. The product was then lixiviated with water in presence of ferrous carbonate (spathic iron ore) to give a ferrocyanide.

It was also observed at an early date (by Clark, in 1837), that cyanides are formed as an efflorescence in blast-furnaces, and that the gases of these furnaces contain cyanogen. Bunsen proposed a special blast-furnace for the production of cyanide, in which coke and potash in alternate layers were to be heated by a strong blast, the fused cyanide running off at the bottom of the furnace. It was found, however, that a very high temperature was necessary, as the potassium compound must be reduced to metallic potassium before combination with atmospheric nitrogen takes place.

Better results were obtained by substituting barium carbonate for $\ce{K2CO3}$ as in the process of Margueritte and DeSourdeval (1861). Air (deoxygenated by hot carbon) was passed over a previously ignited mixture of $\ce{BaCO3}$, iron-filings, coal tar, and sawdust, whereby barium cyanide is produced. This is converted into sodium cyanide by fusion with sodium carbonate. The $\ce{BaCO3}$ is first reduced to barium carbide ($\ce{BaC2}$): $$\ce{BaCO3 + 4C = BaC2 + 3CO}$$ This then combines with nitrogen to form $\ce{Ba(CN)2}$. It has been found, however, that only about 30 per cent. of the barium is converted to cyanide, the remainder forming barium cyanamide by a secondary reaction: $$\ce{ Ba(CN)2 = C + BaCN2}$$ When calcium is substituted for barium in this process, practically the whole is converted into calcium cyanamide: $$\ce{ CaC2 + N2 = C + CaCN2}$$ Calcium cyanamide is also formed in the electric resistance furnace by passing nitrogen over a mixture of lime and charcoal: $$\ce{ CaO + 2C + N2 = CaCN2 + CO}$$ By heating the product at a high temperature with a further quantity of carbon, with the addition of salt to prevent frothing and facilitate the reaction, the cyanamide is converted into cyanide as follows: $$\ce{ CaCN2 + C = Ca(CN)2}$$ The crude mixture so formed has been used as a substitute for potassium cyanide under the name of “Cyankalium surrogat,” and is equivalent in cyanogen contents to about 30 per cent. $\ce{KCN}$. [See Erlwein and Frank, U. S. patent, 708,333]

This book was written by a Cyanide Chemist to the Creston-Colorada Company, South Africa. Thus, he should have definitely tried out these methods, I guessed. He also have hold following titles at the time book was written: Associate of the Instituti on of Mining and Metallurgy; and Associate of the Chemical, Metallurgical, and Mining Society of South Africa. He is also the author of the book, Chemistry of Cyanide Solutions. Thus, I suppose these method should have worked.

I was unable to find the temperature range of the reactions from either references (Ref.1 and 2). However, I found a another patent, which also use the identical processes to synthesize alkali cyanogen compounds (Ref.3). This patent mentioned the temperature range of $\pu{800-1000 ^\circ C}$. In this process, sodium sulfide has been used in place of sadium carbonate. The authors depicted following equation as the result:

Not the answer you're looking for? Browse other questions tagged inorganic-chemistry synthesis reference-request or ask your own question.

2
How to prepare potassium cyanide from potassium ferrocyanide

7
Reference for UV/Vis Spectroscopic Data request
2
How to prepare potassium cyanide from potassium ferrocyanide
1
Reference request - Nomenclature of organophosphorus compounds?
19
What did actually happen when Staudinger tried to synthesise diamond?
0
questions about the synthesis of iodobenzene from aniline
2
Reference request on formate potash process
3
Reference Request - bond lengths in PCl2F3