How would I measure the Carbon Dioxide content in Coca Cola over a period of time?

I'm sorry if this is a broad question, but I am trying to plan a simple experiment. I am wondering is there a somewhat simple way of continuously measuring $\ce{CO2}$. I already know the initial carbon dioxide content is around $\pu{2.2g}$ from research, but I don't know how this result is reached.

Measure the change in mass over time of the remaining liquid. Though some water will also evaporate, you can control for that by keeping the humidity near 100%.

If you have to be precise, collect the outgassed $\ce{CO2}$ in a liquid-nitrogen cold trap. Check the mass of the condensate, which should equal that lost from the soda. Check purity, to be really finicky.

Measure concentration in a fixed volume of air

Easiest way might be to put it in a sealed impermeable bag or box and measure the CO2 concentration over time. Home hobbyists use something like the MG-811 CO2 sensor or a simple non-dispersive optical sensor and connect it to a Raspberry Pi or Arduino using an analog to digital converter chip (ADC). For (a little) more on that see this answer to Why are CO2 sensors so expensive when CO sensors aren't?

...CO2 sensors are either solid electrolyte chemical cells like the MG-811 or newer versions (see this question) or they are Non-dispersive Infrared Light sensors (NDIRs) based on optical absorption of a certain wavelength of infrared light, using a hot filament or other light source to produce IR and a narrow multilayer optical filter to select one of the strong absorption lines of CO2. The more CO2, the more the reduction in the transmission of light in the optical path of the sensor.

You would estimate the total volume of trapped air and multiply by the fraction that is CO2 (at each time point) to get the accumulated amount of CO2 released by the liquid.

Building on @DrMoishe Pippi's proposed technique though I can't guarantee precision, you could try to use something else to absorb CO2 besides a cold trap.

I propose that you consider a carbon dioxide scrubber.

However, lithium hydroxide may not be suitable for home use as it is very dangerous to touch or otherwise contact! So you should do this with supervision.

Lithium hydroxide, solution appears as a clear to water-white liquid which may have a pungent odor. Contact may cause severe irritation to skin, eyes, and mucous membranes. It may be toxic by ingestion, inhalation and skin absorption. It is used to make other chemicals.

The regenerative carbon dioxide removal system (RCRS) on the space shuttle orbiter used a two-bed system that provided continuous removal of carbon dioxide without expendable products. Regenerable systems allowed a shuttle mission a longer stay in space without having to replenish its sorbent canisters. Older lithium hydroxide (LiOH)-based systems, which are non-regenerable, were replaced by regenerable metal-oxide-based systems. A system based on metal oxide primarily consisted of a metal oxide sorbent canister and a regenerator assembly. It worked by removing carbon dioxide using a sorbent material and then regenerating the sorbent material. The metal-oxide sorbent canister was regenerated by pumping air at approximately 400 °F (204 °C) through it at a standard flow rate of 7.5 cu ft/min (0.0035 m3/s) for 10 hours.

Exactly how to do it will require some input by an actual chemist. That might be best asked as a new question "How to use off-the-shelf LiOH (pellets or powder) as a home-made CO2 scrubber?" for example.

If you put the open container in a larger container (sealed, impermeable plastic bag or box) with something else that absorbed CO2 and held on to it at room temperature, you could weigh it before and after as a lower limit at least to the CO2 lost by the liquid.

If you have ever seen the movie Apollo 13 or know the story of the CO2 scrubber canister (1, 2) you might recollect that it removed the astronaut's exhaled CO2 from the cabin air and held it within the solid LiOH pellets it contained.

Because they needed it to be compact but to scrub a large volume of air, the spacecraft used a fan to circulate air through the scrubber. But in your case it might be possible to use lithium hydroxide or another material like silver oxide (see this answer and EMU METOX Performance Testing).

Here is some data from that report. You can see that the ~14 kg of silver oxide could hold roughly 0.8 kg of CO2. 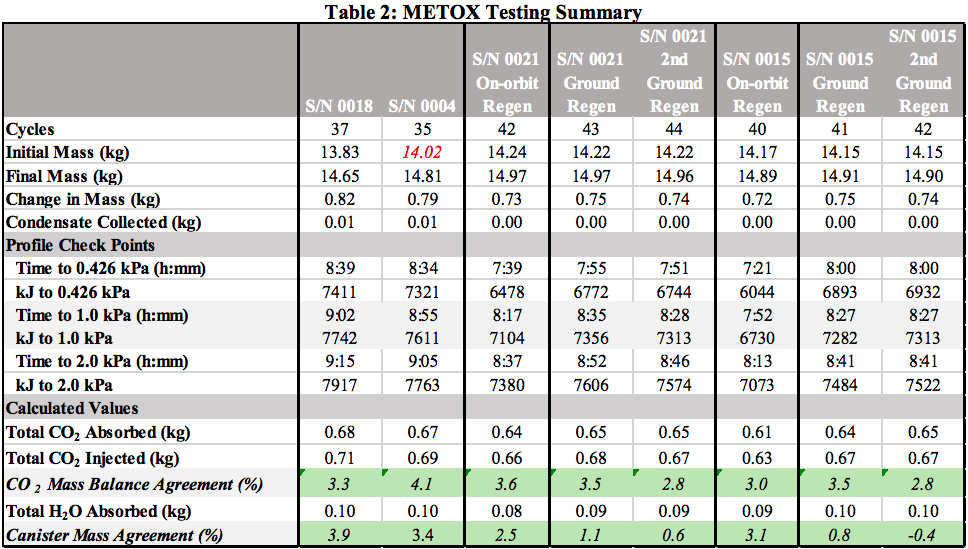 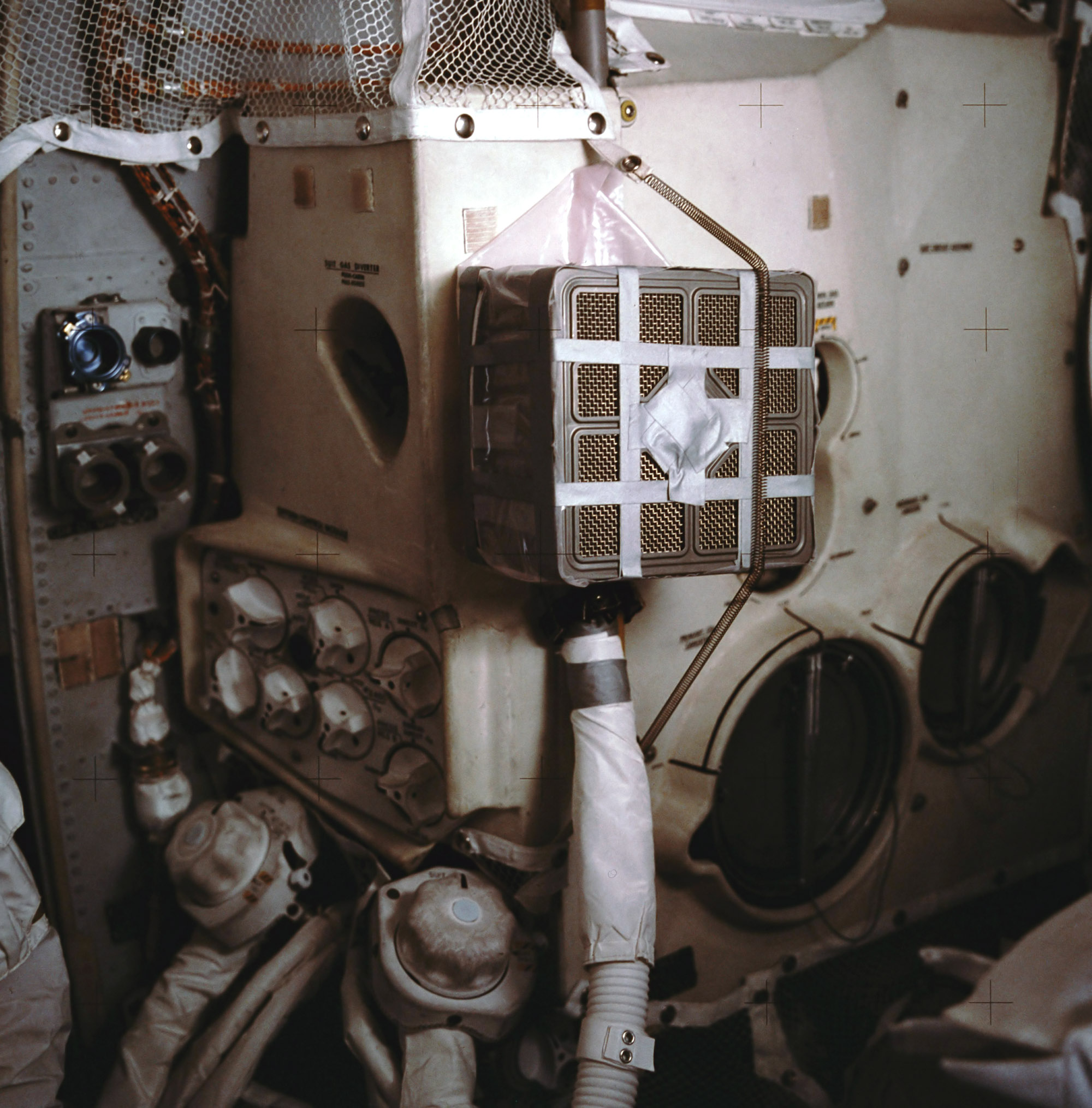 For a direct measurement of $\ce{CO2}$ content, it is possible to use infrared (IR) spectroscopy. Infrared radiation can be absorbed by molecules, causing them to vibrate. The exact frequency of the radiation absorbed is often characteristic of certain bonds or functional groups.

In particular, the fundamental antisymmetric stretching mode of $\ce{CO2}$ in aqueous solution (specifically the carbon-12 isotopologue $\ce{^{12}CO2(aq)}$, not carbonic acid $\ce{H2CO3}$) is excited by photons of wavelength $\mathrm{4268\ nm}$ (more commonly reported as $\mathrm{2342.9\ cm^{-1}}$ wavenumbers for historical reasons). This vibrational mode is useful for the following reasons:

Altogether, these properties make the peak suitable for analytic measurements. This has been discussed in Vib. Spect., 1992, 4 (1), 105-108. Though the article did not explore the possibility, it's likely the technique could be adapted for use in sodas. Measurements could potentially be performed directly in unopened bottles. Furthermore, similar benefits exist for measuring gaseous $\ce{CO2}$, so an independent measurement of the space above the liquid could be performed with the same instrument, and the results cross-checked for additional accuracy.

This wouldn't be very easy for a hobbyist doing kitchen chemistry (though handheld/compact/portable IR spectrometers exist and aren't tremendously expensive), but such a study would be very well within reach of most chemical laboratories.

The advantage over other methods is that you measure the concentration in situ and therefore do not have to concern yourself with how to capture $\ce{CO2}$ quantitatively (weighting small amounts), how to discriminate $\ce{CO2}$ from other gases (for instance water, which must be removed from the gas or prevented from condensing in the $\ce{CO2}$ trap), on complicated intermittent sampling, and on how the rate of capture might affect your measurement.

It should work with Coca-Cola:

pH Range: Samples and standards must be adjusted to below pH 4.00

A very different method which should work well given the high initial level of carbonation in Coca-Cola (141 mM by my estimation based on this post) is $\ce{^{13}C}$-NMR. See for instance Reference 1. Spectra of liquid solutions are high in resolution and one dimensional data can be acquired continuously in a span of a few minutes per spectrum.

Note the spectra might be acquired at natural $\ce{^{13}C}$ abundance (about 1%) or spiked (enriched) with $\ce{^{13}C}$, which of course will be (a lot) more expensive. You might on the other hand be able to capture for reuse the released $\ce{^{13}C}$ with one of the methods suggested in one of the other answers.

5
How much carbonation is in one liter of commercial fountain Coca-Cola
3
Acetic acid odor while testing CO2 sensor; can it be easily removed, is there a better way?

47
Why is the recipe of Coca Cola still a secret?
4
Thermodynamics and Coffee
5
Investigating a factor affecting buffer capacity
11
How does the "kreosan" Coca-Cola rocket work?
3
How to measure/know the moles of carbon dioxide (as dry ice) when in KOH solution
5
How much yeast is necessary to produce the same amount of carbon dioxide that I exhale?