How does LeChatelier’s principle (which makes qualitative predictions) relate to the quantitative changes observed when an equilibrium is disturbed?

Le Chatelier formulated his principle in 1884; it predicts the direction in which equilibrium is re-established after it has been disturbed by an external cause. How does this qualitative principle relate to the known quantitative changes that occur when an equilibrium is disturbed by a change in temperature, concentration or pressure? Are there any limitations of Le Chatelier's principle as it is stated by modern sources?

How does this qualitative principle relate to the known quantitative changes that occur when an equilibrium is disturbed by a change in temperature, concentration or pressure?

For example, if we look at the following reaction:

The equilibrium constant expression for this reaction is:

$$K = \frac{\ce{[C]_{eq}}}{\ce{[A]_{eq}}\ce{[B]_{eq}}},$$ with $\ce{[X]_{eq}}$ designating the equilibrium activity (or fugacity for gas state) of a species. At a given temperature, the equilibrium constant will have the same value when the reaction is at equilibrium, no matter what the starting conditions.

The reaction quotient is defined in the same way as the equilibrium constant, but using $\ce{[X]_{t}}$ (the current activity) instead of the activity at equilibrium $\ce{[X]_{eq}}$. For the example reaction above, it is:

Q can have arbitrary values from zero to infinity, depending on what reaction mixtures is found at a given time. Q will change over time if there is a net forward or reverse reaction.

Criterion for equilibrium based on Q vs. K

When Q equals K, the reaction is at equilibrium because the current activities $\ce{[X]_{t}}$ plugged into the equilibrium constant expression match K. Any net reaction in the forward direction would typically increase Q, while any net reaction in the reverse direction would typically decrease Q. This relies on the assumption that the activity of reactants decreases and that of the products (of the species included in the equilibrium constant expression) increases as the reaction goes forward (and vice versa as it goes in reverse).

When, after the reaction has attained equilibrium, the temperature changes (through an external cause) and consequently the equilibrium constant changes, Q no longer equals K. Concentrations that had been constant over time will change now. In the example, we are changing the temperature at $t = 5$ (arbitrary units) so that the equilibrium constant doubles. The only way to make Q equal K again at this temperature is to have a net forward reaction (this will increase product activities and decrease reactant activities in the reaction quotient expression). An example is shown below: 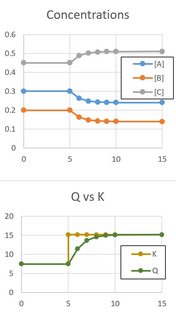 If we change the activity of a single species (for example by adding or removing solute) in a reaction that has already attained equilibrium, Q will change. If the temperature is maintained, K will remain constant, and Q will no longer be equal to K. As a result, a net reaction will be observed.

For example, if we double the activity of A in the reaction above, Q will be halved, and the reaction has to move in the net forward direction to attain equilibrium again: 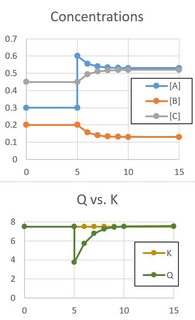 After equilibrium is attained, Q will have the same value as it did before the external manipulation, but the set of activities will be different (necessarily, because there is more matter now).

Are there any limitations of Le Chatelier's principle as it is stated by modern sources?

Any system in stable chemical equilibrium subjected to the influence of an external cause which tends to vary either its temperature or its condensation (pressure, concentration, number of molecules in the unit of volume) in its totality or only in some of its parts, can only experience internal modifications, which, if they occurred alone, would bring about a change in temperature or condensation of a sign contrary to that resulting from the external cause.

Wikipedia states the principle as:

When any system at equilibrium for a long period of time is subjected to change in concentration, temperature, volume, or pressure, (1) the system changes to a new equilibrium and (2) this change partly counteracts the applied change.

[in text]if an equilibrium system is stressed, the system will experience a shift in response to the stress that re-establishes equilibrium.

if a system is in equilibrium and some factor in the equilibrium conditions is altered, then the system will (if possible) adjust to a new equilibrium state so as to counteract this alteration to some degree.

Limitations of the principle are discussed, for example, in this letter in the Journal of Chemical Education, and in the literature cited within. Another article in the same journal discusses how applying Le Chatelier's principle leads a convenience sample of educators to incorrectly answer questions such as :

The reaction $$\ce{2NO2(g) <=> N2O4(g)}$$ is at equilibrium in a syringe. If the volume is decreased at constant temperature by moving the plunger, will the concentration of NO2(g) be higher or lower than the original concentration when equilibrium is re-established? Give reasons for your answer.

The misconception is that while Le Chatelier's principle correctly predicts that the reaction will form product after the pressure is increased, this does not completely offset the increase in partial pressure from lowering the volume.

Some authors argue that it makes sense not to teach Le Chatelier's principle to avoid such confusion, and instead treat equilibrium in a quantitative matter, calculating the new equilibrium state rather than predicting it qualitatively.