Reactions which confirms the presence of cyclic structure of glucose [duplicate]

Ask Question
Asked 1 year, 1 month ago
Active 1 year, 1 month ago
Viewed 573 times
2
$\begingroup$
This question already has answers here:
How does existence of alpha and beta form of glucose prove that it exists as a cyclic structure (2 answers)
Closed 1 year ago.

Yes, such a reaction exists. In fact, it can not only confirm the presence of ring forms in solution but also how prevalent they are.

In 1962, Walker Jr, Gee and McCready published Complete Methylation of Reducing Carbohydrates, in which they subject solutions of sugars in dry DMF to silver(I) oxide and methyl iodide. The reaction proceeds according to scheme 1 below.

Scheme 1: Methylation of glucose with $\ce{Ag2O}$ and $\ce{MeI}$ as published by Walker Jr, Gee and McCready.

Before reporting on the products, they note:

It was somewhat unexpected that methylation of aldoses would proceed so smoothly in the presence of silver oxide. Glucose, shaken with silver oxide in DMF at room temperature, is partially decomposed in several hours.

Usually, silver(I) salts in solution are used in the Tollens test in which reducing sugars such as glucose reduce the silver ions to give elemental silver which forms a silver film on the inside of the glass. The presence of methyl iodide completely suppresses this reaction as they state in the next sentence:

When methyl iodide is present in the reaction mixture, however, no silver mirror (indicating oxidation-reduction) is formed

As for the two step process that I have indicated, the authors state:

In this reaction methylation of hydroxyl of the hemi-acetal group of glucose is essentially complete in one hour (as shown by loss of reducing function), but complete etherification of the remaining hydroxyls requires considerably longer.

With the experimental section detailing that the reactions were run ‘at least $\pu{16h}$’ which permits drawing the mechanism as a two-stage process as 1 can be isolated if the reaction is cut short.

Mechanistically, this reaction process is different from an acid-catalysed acetalisation with methanol. In the latter, an entire $\ce{OMe}$ group is attached to the sugar and the reactive species is an aldehyde form. This could be the open-chain aldehyde form (requires an additional reaction step) but most likely occurs via a cyclic aldehyde as depicted below. When using $\ce{Ag2O/MeI}$, the acetal oxygen is supplied by glucose as methyl iodide does not have any available oxygen. The two competing mechanisms are shown in scheme 2. 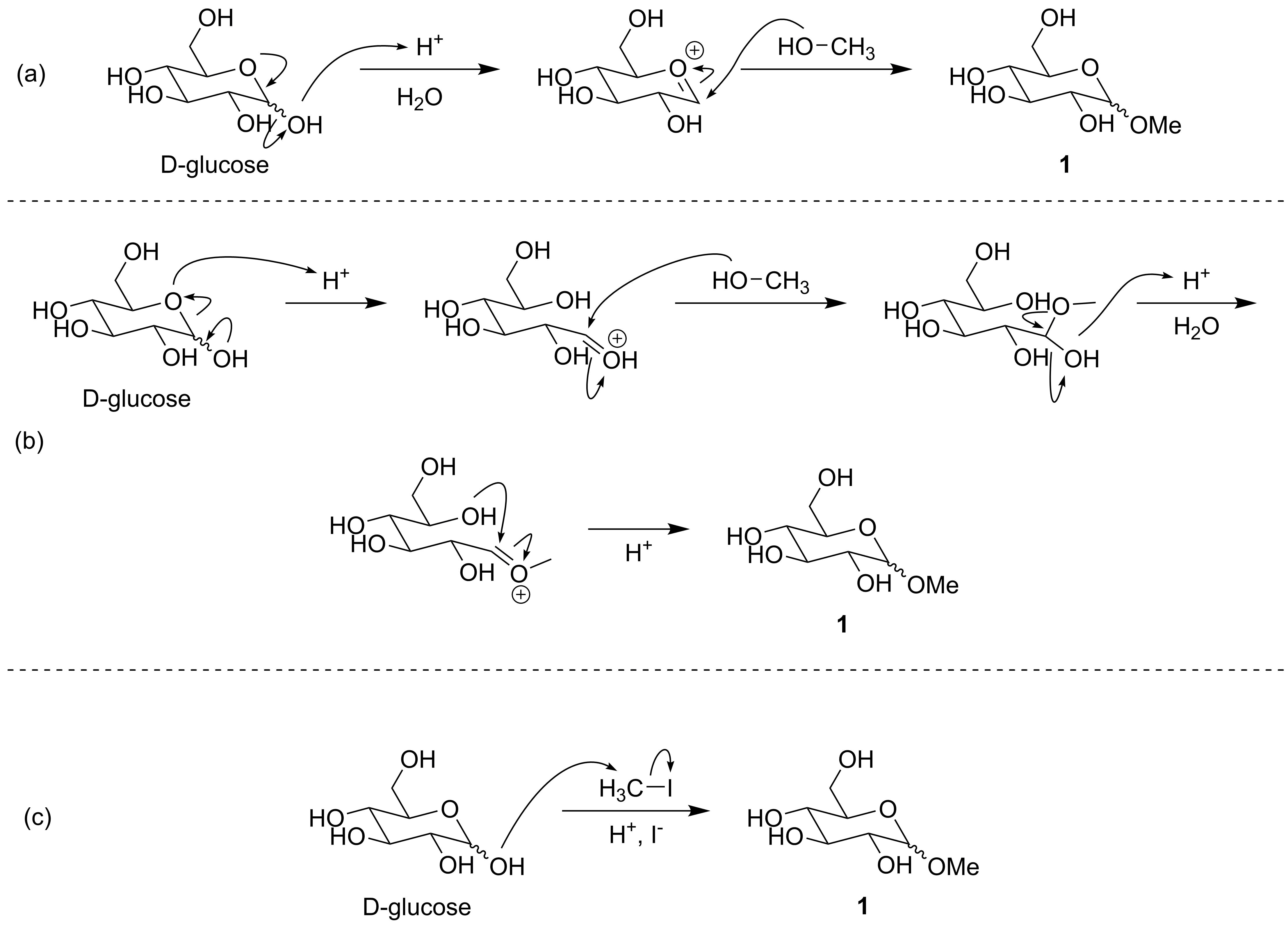 As these mechanisms show, acid-catalysed acetalisation need not start from the cyclic form to get acetal 1; it is possible to draw the reaction mechanism as originating from the chain form of glucose. But methylation with $\ce{MeI}$ requires the oxygen to be in place as an $\ce{OH}$ function that is deprotonated and attacks $\ce{MeI}$ which is not possible if the chain form were present in solution.

As to why the $\ce{C{1}}$ oxygen is methylated first, and the explanation is the higher acidity of an acetal hydroxy function when compared to an alcoholic one as the authors state:

This difference in rate is expected from the difference in acidity (and ease of anion formation) of the hydrogens on the two different types of hydroxyl groups.

Furthermore, it bears stating that this reaction not only proves cyclic forms are present but also that they are prevalent. Methylation of the $\ce{C{1}}$ oxygen is rapid compared to all the other hydroxy groups meaning that they should be present in at least appreaciable ratios. Furthermore as mentioned above, under these conditions the reduction of silver(I) to a silver mirror – which requires the open-chain aldehyde form mechanistically – is practically entirely suppressed. Given that the Tollens test is a standardised method to detect glucose, the complete absence of all traces of silver film serves as a good indicator of the low concentration of open-chain aldehyde in solution.

Not the answer you're looking for? Browse other questions tagged organic-chemistry carbohydrates or ask your own question.

6
Why does the cyclization of open-chain glucose occur via the C5 hydroxyl group?
1
Potassium permanganate oxidation of sugars
9
Does glucose react with Brady's reagent?
6
How to Convert Sucrose to Glucose and Fructose
7
Ambigious nature of aldehydic group in glucose
1
Clarification in the mechanism for Molisch's test for glucose
4
How does existence of alpha and beta form of glucose prove that it exists as a cyclic structure
1
Why doesn't open-chain glucose react with water readily in aqueous solution?