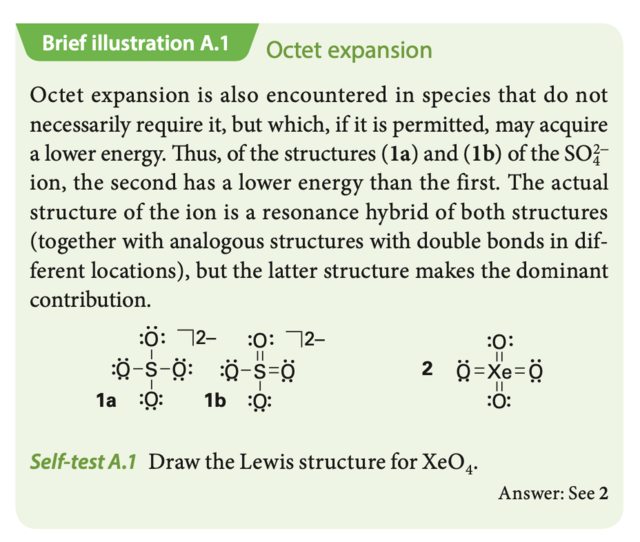 I have two questions regarding this illustration:

I would greatly appreciate it if people could please take the time to clarify this.

You are reasoning as if the ion $\ce{SO4^2-}$ is planar. It is not the case. It has a tetrahedral geometry. And what you see in Atkins' book is a projection of the tetrahedron on a horizontal plane. So the angles between the bonds are not 90°, but larger. It is the same for $\ce{XeO4}$. This reality will solve all your questions simultaneously.

Not the answer you're looking for? Browse other questions tagged molecular-structure lewis-structure or ask your own question.

8
How can compounds like XeO4 form tetrahedral structures despite having double bonds?
4
Are the Phosphate and Sulfate ion diagrams with double bonds an invalid picture?

3
IBrF2 - van der Waals repulsions - and number of unique bond angles
6
How does VSEPR theory explain the formation of different bond angles in PCl₅?
15
Lewis Structure on (CH3)2NO?
4
Is it possible to use the school supplied algorithm to build the Lewis diagram of the iodate ion?