How to arrive at the preferred IUPAC name for 1,2-diphenylethane?

I am reading a textbook that mentions the molecule 1,2-diphenylethane, $\ce{C14H14}$. A Google search leads to PubChem, where it is mentioned that the IUPAC name for the molecule is 2-phenylethylbenzene. I'm trying to understand how one names the molecule, using IUPAC nomenclature. However, I'm struggling to find any material that describes how apply IUPAC nomenclature to these "double benzene" (polycyclic aromatic hydrocarbon?) molecules. I would greatly appreciate it if someone could please redirect me to a page that describes this and describe the naming process for this particular molecule.

The essential problem in this case is finding the parent structure. According to the current version of Nomenclature of Organic Chemistry – IUPAC Recommendations and Preferred Names 2013 (Blue Book), a structure with two or more identical units that are linked by di- or polyvalent groups can be named in two ways:

Both methods yield correct names, which may be used in general nomenclature.

In many related simple cases, the compound consists of just a ring and a chain so that the parent structure could be the ring or the chain.

The corresponding rule in the current version of Nomenclature of Organic Chemistry – IUPAC Recommendations and Preferred Names 2013 (Blue Book) reads as follows:

These rules apply to compounds that consist of one ring and one chain. The compound that is given in the question, however, consists of a symmetrical chain with two rings. Extending the use of the above-mentioned rules to this case, we could pick one of the rings as the parent structure in accordance with Rule P-52.2.8. This approach would result in the correct name (2-phenylethyl)benzene. Since this method usually yields the preferred IUPAC in many simple cases, it should not be a surprise if some computer-generated names follow this pattern also in this case. Note, however, that the name “2-phenylethylbenzene” suggested in Pubchem is not correct and ambiguous (“2‑phenylethylbenzene” could be interpreted as “(2‑phenylethyl)benzene” or “2‑phenyl‑1‑ethylbenzene”).

In accordance with P-44.1.2.2, the context may favour the chain as parent structure. For the compound that is given in the question, the context may favour the chain in order to highlight the symmetrical shape of the structure, in order to treat the equivalent rings alike, or because a following reaction happens at the chain. This approach would result in the correct name 1,2-diphenylethane.

The IUPAC recommendations explain when multiplicative nomenclature is used to generate the preferred IUPAC name (PIN) as follows.

The compound that is given in the question fulfils these requirements; therefore, the preferred IUPAC name is generated by multiplicative nomenclature as follows. 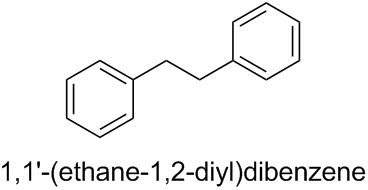 Not the answer you're looking for? Browse other questions tagged nomenclature aromatic-compounds or ask your own question.

4
How is a side-group that contains a double bond named?
2
Omission of locants for functional groups in IUPAC names
3
How to name molecules with a hydroxyl group in a side chain?
21
What does the newest IUPAC nomenclature have against unsaturation?
5
What are the conditions for using skeletal replacement ('a') nomenclature?