Pressure vs volume plot for real gas and ideal gas

Recently I have been studying about the states of matter and came to the topic of ideal gases and real gases, and the laws related to them. While studying it from my textbook, I saw the plot of pressure vs volume for real gas and ideal gas. The problem is that the interpretation I am getting from the graph is quite contrary to what I have learnt till now (this might be because of some conceptual misunderstanding of mine. Sorry if the question looks foolish). 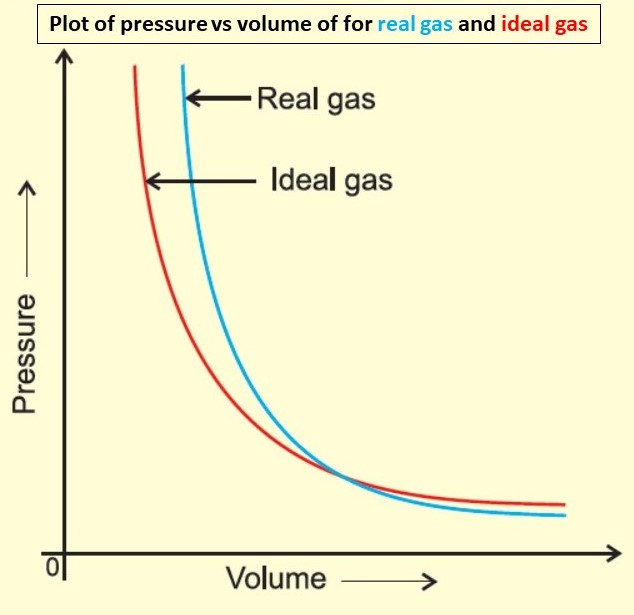 In the above image of the plot, there is a point where real gas behaves the same as ideal gas (where the curves intersect). From this point, as we decrease the volume in the graph we find that pressure exerted by the real gas is greater than that by the ideal gas. This seems to be contrary to what I have learnt, which is as the volume of a real gas decreases the pressure exerted by a real gas becomes lesser than ideal gas at the same volume (due to increased intermolecular attraction). In reality even this isn't the case as decreasing the volume much further causes the intermolecular repulsion to overcome the attraction at some point and hence increase the pressure. But as far as I know the graph has been made with the use of the van der Waals equation (I checked it myself via plotting the graph in Desmos and it looked the same as shown above). But the assumption with which the equation (and hence the graph) were derived say something different. The equation I'm talking about is $P_\mathrm{ideal} = P_\mathrm{real} + \dfrac {an^2}{V^2}$, and as far as I can comprehend it says pressure by an ideal gas is greater than pressure by a real gas at a given volume. Hence the question: Why does the equation $\left(P_\mathrm{ideal}=P_\mathrm{real}+\dfrac {an^2}{V^2}\right)$ and the graph (shown above) say totally different thing about the pressure at a given volume? Please do point out if I am going wrong anywhere. Thanks in advance! Here in this crash Course video the same logic as mine is given for decrease in pressure for real gas.

(1) The OP asks for a discussion of VDW gases, and thus most of this analysis concerns the predictions of the VDW model. However, the curves presented in the OP's screenshot are for real gases and thus, at the end, I discuss their behavior.

(2) Below the VDW critical temperature (which equals $\frac{8a}{27bR}$, and is thus gas-specific), the VDW isotherms (the curves on a $p-V$ graph) begin to show oscillations. Those oscillations are beyond the scope of this question, but they should be noted for completeness. This answer assumes we are above the VDW critical temperature for each gas.

Instead, the molecules are assumed to have a physical volume, and the effect of this volume is to reduce the free volume left for the gas. The volume of one mole of molecules (or atoms) is given by the VDW "b" term.

This should help illustrate how the physical volume of the gas particles affects the pressure:

Suppose you are at a volume where the hard spheres themselves take up half the container. If there were no attractive forces, the pressure of the VDW gas would be double that of the ideal gas, because only half as much free volume is left for the VDW gas, such that p will be a monotonically decreasing function of V.

At very low volume (low relative to the volume taken up by the hard spheres), the molecular volume term dominates, and thus p_VDW > p_IG (where IG = ideal gas).

At a sufficiently high volume, the pressure-increasing effect of molecular volume becomes less than the pressure-reducing effect of the attractive force, and thus p_VDW < p_IG. Hence there is a point at which the VDW and IG curves cross over.

Note: the above discussion is referring to the VDW model, not necessarily to how real gases actually behave.

We can also see this from the mathematical structure of the VDW equation:

In the limit as $V_m \rightarrow b$, $(V_m-b)\rightarrow 0$, causing the first term to dominate over the second.

As $V_m$ gets large, whether the attraction can win out over the excluded volume is determined by the magnitude of T, and the relative values of a and b.

In the limit as $V_m \rightarrow \infty$, for all gases, the VDW equation reduce to the ideal gas equation:

Comparative pressure vs. volume plots of VDW and ideal gas 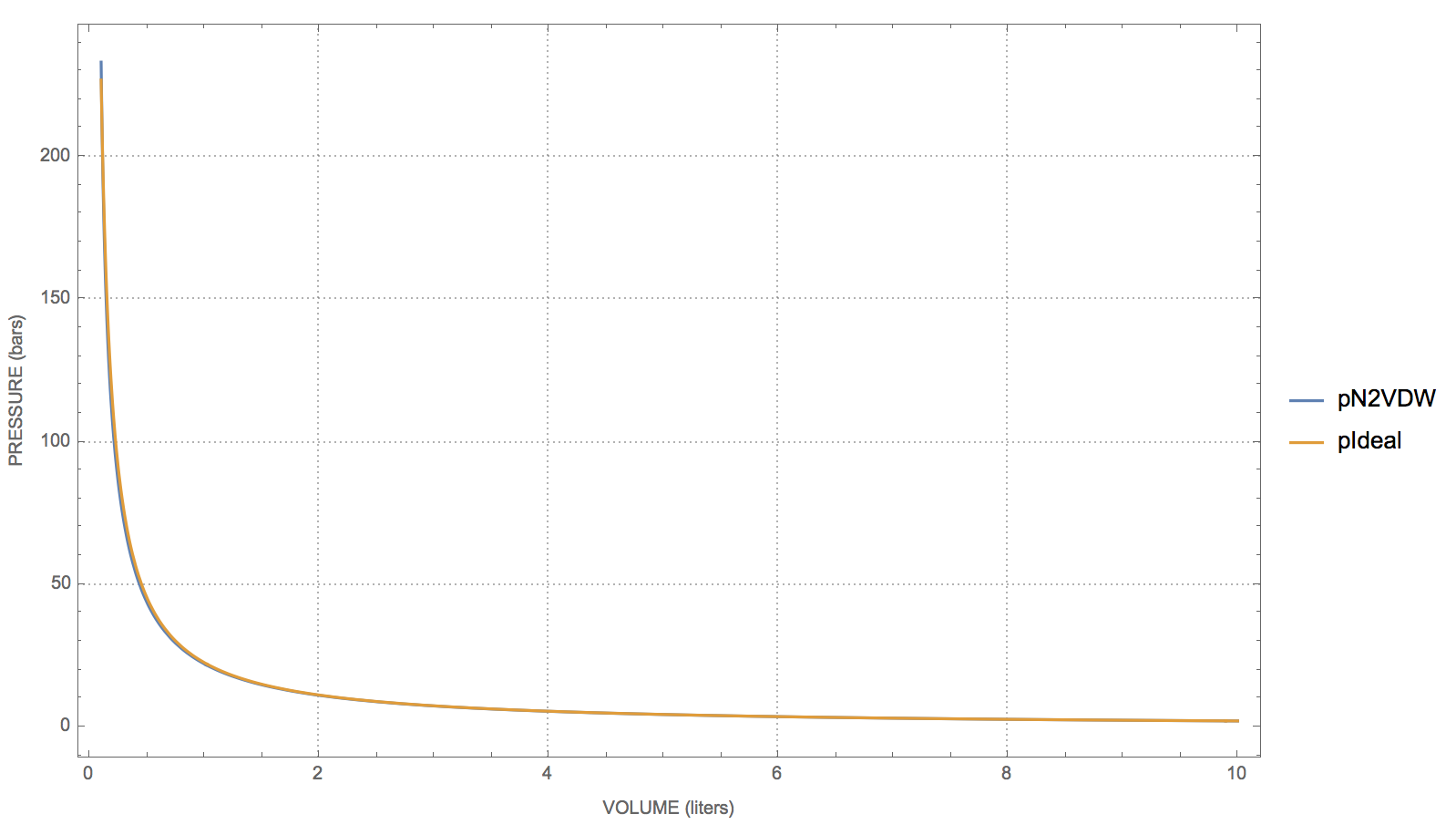 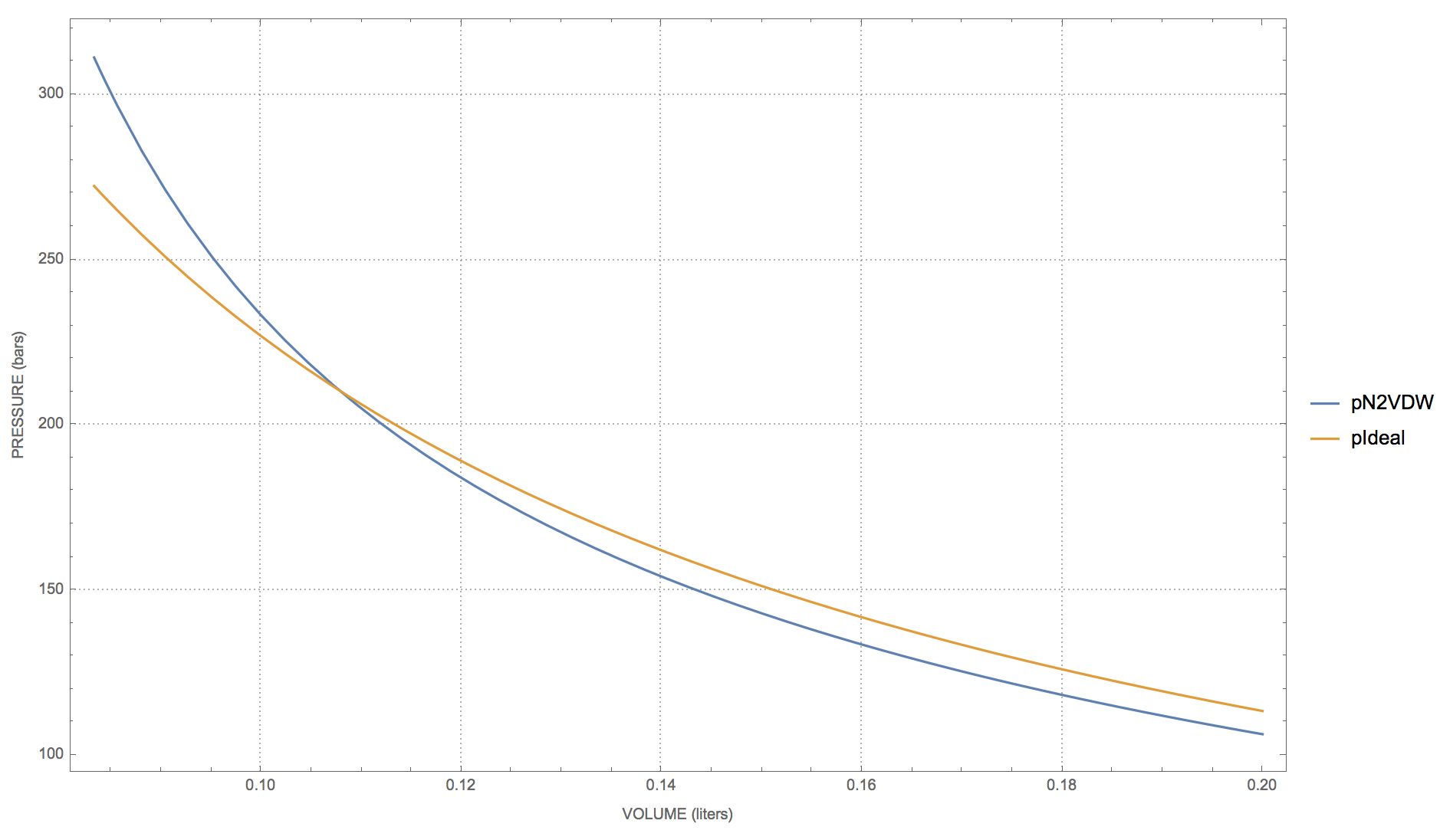 We can further improve our understanding by plotting the difference between pIdeal and pN2VDW vs $V$. This allows us to see, directly, how the deviation between the VDW equation and the ideal gas equation changes with volume.

Let's start at high volume, and move to the left. At high volume, the attractive term dominates. As the volume decreases, the molecules get closer together, so the attractive term has even more effect, increasing the difference between pIdeal and pVDWN2. This continues until $V=0.154 \,\ce{L}$ [I determined this minimum by setting the derivative of (pN2VDW - pIdeal) equal to zero, and solving for $V$.] Beyond this, the increase in pressure due to the diminishing free volume becomes greater than the decrease in pressure due to the increasingly strong attractive forces. Eventually, at $V=0.108 \,\ce{L}$ the effect of the hard sphere volume just balances that of the attractive forces, and the curve crosses above the zero line. 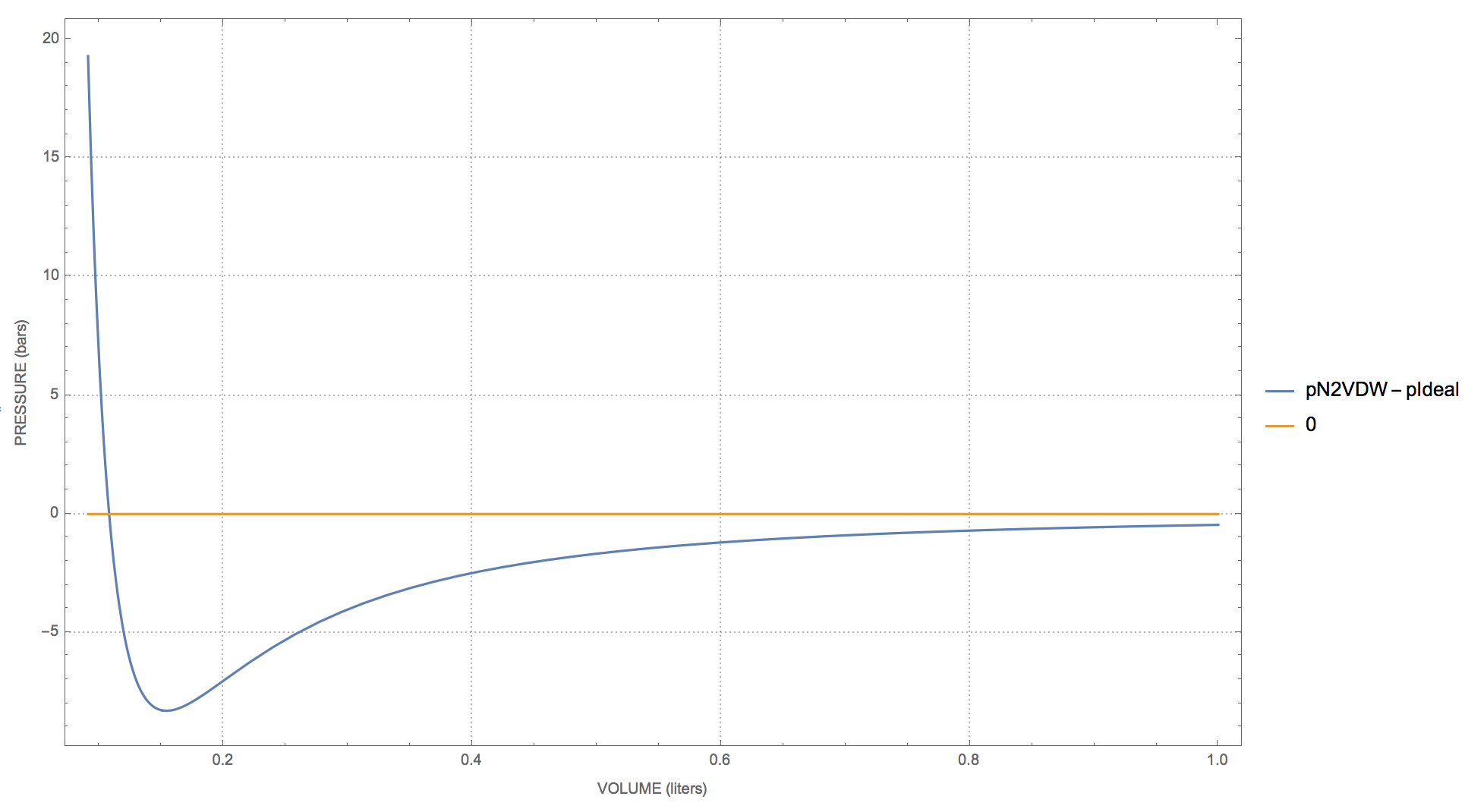 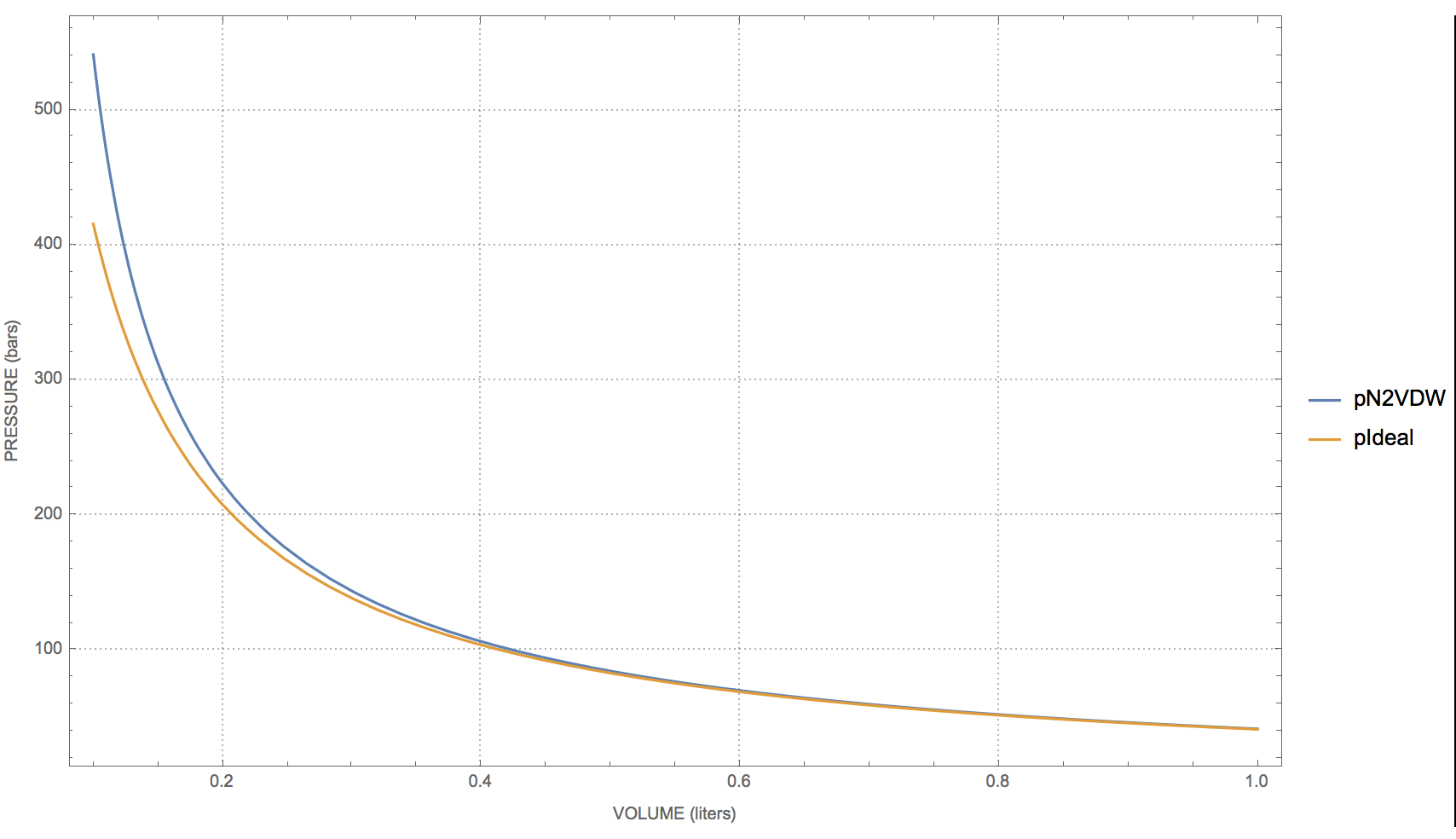 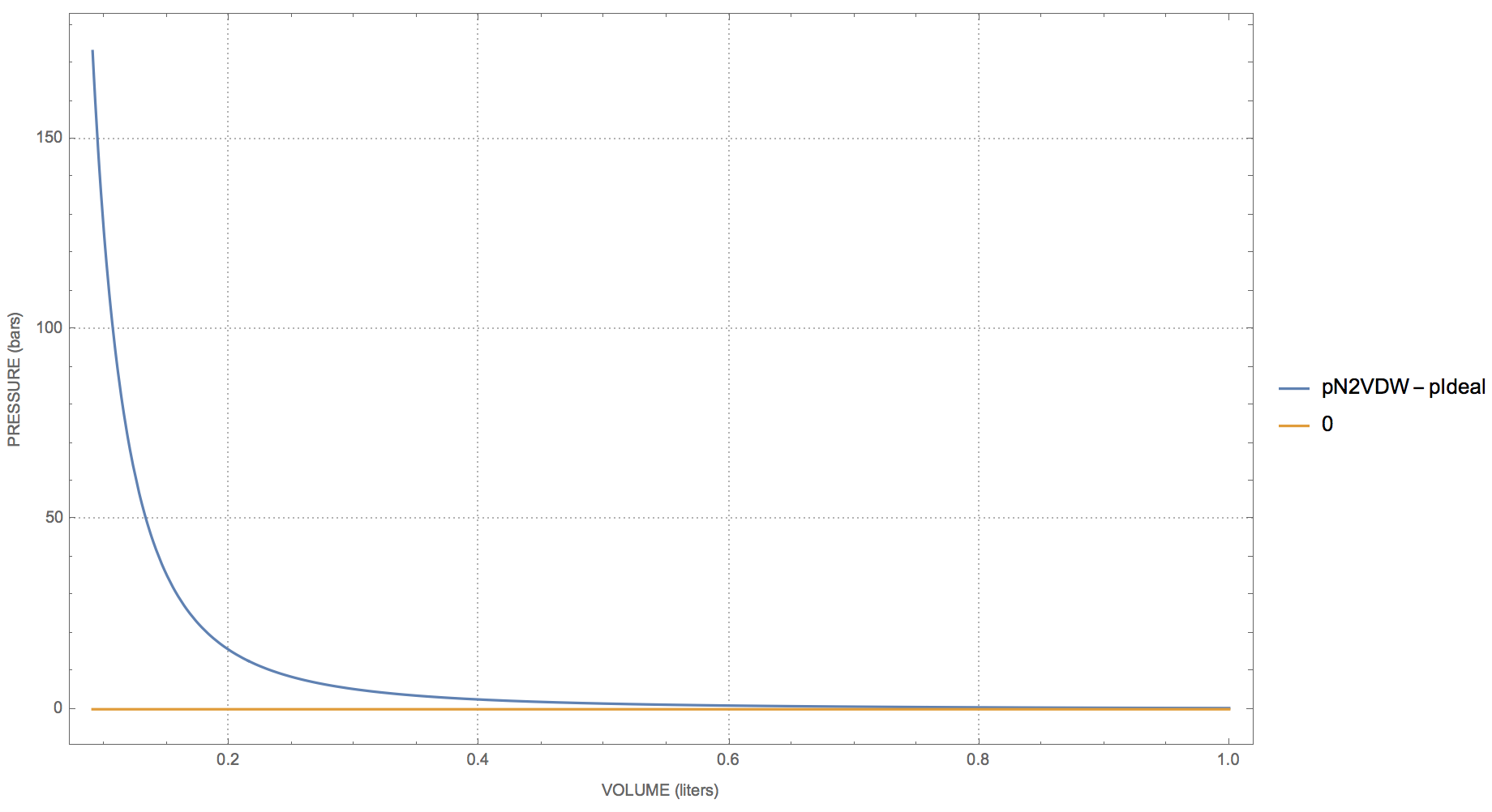 The easiest way to see how the isotherms for real gases compare with those for an ideal gas is to look at the measured compressibility factor, $Z$:

From https://en.wikipedia.org/wiki/Compressibility_factor#/media/File:Z_Overview.png, we have the following diagram for $\ce{N2(g)}$. It appears to show behavior similar to what the VDW equation predicts— at lower temperatures, we see a crossover from $p_{real} > p_{ideal}$ at high $p$ (low $V$), to $p_{real} < p_{ideal}$ at low $p$ (high $V$).

However, as the temperature increases, $p_{real}$ reduces its tendency to dip below $p_{ideal}$ (see red curve). However, a direct examination of the numerical data would be needed to determine if, at high $T$, there is no crossover at all. 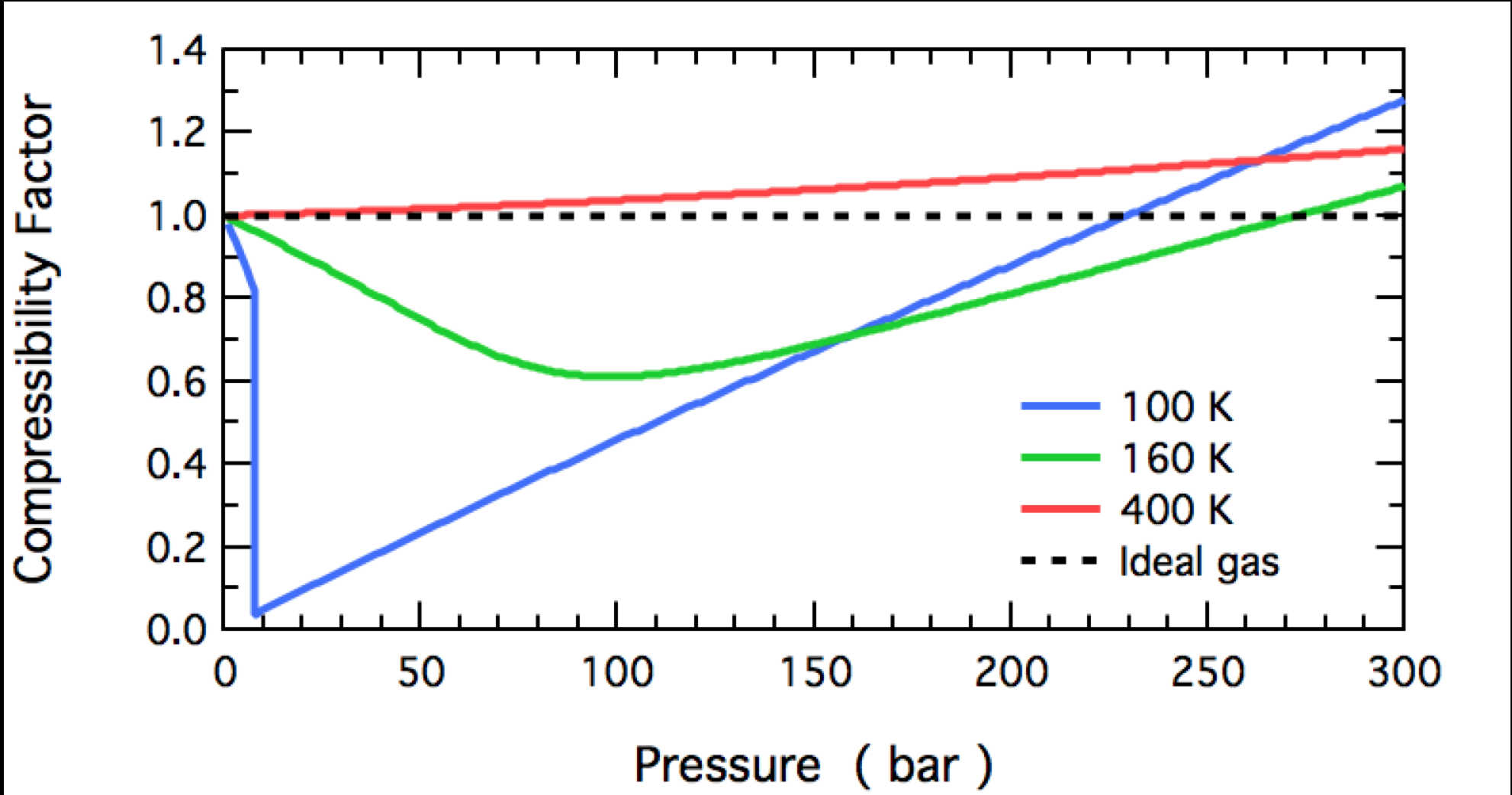 And when the pressure is extremely low, the volume increases but not as much as calculated with the ideal law, because there is some small attraction between the molecules. This is exactly what you see on your picture if you draw a horizontal line at its lower part

In the upper left part of graph, you can see that to exert same pressure , we need more of a real gas then an ideal gas or similarly at a certain volume of both , the pressure exerted by real gas is more than that of ideal gas. This can be explained by fact that molecular size of ideal gas particles is negligible while that of real gas particles is considerable. If you take equal volume $V$ of both, the ideal gas has occupied complete volume $V$ while real gas has occupied effectively somewhat less volume (which is $V'=V-nb$). Therefore even if we have same number molecules of real gas as that of ideal gas, real gas molecules have lower volume to move into thus they exert more pressure.

The Van der Waals equation of state is

Also note that when $V$ is very large the second term can be neglected and in that case real gas tends to ideal conditions.

At large volume the second term tends to zero and the first to $RT/V$ the ideal gas value. At small volumes the second term becomes larger and negative and reduces the pressure from the ideal behaviour. Thus the ideal and real curves do not cross and the ideal is always greater than the real.

The interaction between molecules ensures that the real pressure is lower than in the ideal case. (You can imagine this in a hand waving sort of way by imagining that a small fraction of molecules form dimers so that the expected pressure is not measured because some molecules are paired up.)

Thus the figure in the question is wrong on a number of points. 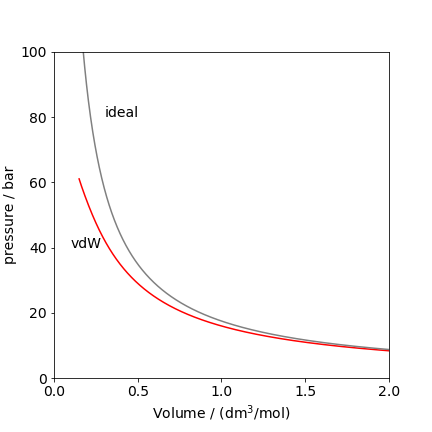 I'm adding some notes here about the vdw equation as there is confusion in the comments.

First it is clear that the van-der-Waals equation can produce negative pressures. It is an empirical equation that produces largely qualitative results. All that has to happen to get negative pressures is that the second term exceeds the first in the equation above. Negative pressures are, of course, unphysical and this shows that this equation has to be used with great care otherwise completely misleading results will be obtained.

Second, at large volumes the $V_m-b$ term is smaller than $V$ because $b$ is positive, so the pressure will exceed that given by the ideal gas but the effect is small. A typical molar volume of $0.25\;\mathrm{ dm^3/mol}$ vs a typical value of $b=0.02\;\mathrm{dm^3/mol}$, so small as to be physically meaningless but mathematically possible, what I mean is that we would normally take $V_m-b \to V_m$ at large $V_m$.

The important point about the two curves in the figure is that the interaction between molecules, (due to polarisability/ dipoles ) makes the experimental pressure less than that of the ideal, e.g. methane at 273.15 K pressure is 78.6 bar by experiment but 90.8 by ideal gas law and 72.9 by van-der-Waals. The van-der-Waals eqn. tries to model the experimental results and does so quite well but should not be pushed to the mathematical limits as here it fails.

2
Ideal gas law? implied volume?
5
Why is the ideal gas law so ubiquitous?
1
Non-Ideal Gas Behavior
1
Volume occupied by real gases
6
Real Gas Equation
2
why is the pressure exerted by ideal gas on the walls of the container more than that of real gas
1
Solving a quadratic equation for pressure of real gas with unknown volume
12
Can the van der Waals coefficients be negative in the van der Waals equation for real gases?
8
Confusion in Van der Waals Equation