Nomenclature of ester with cyclic substituents

I have to tell the name of the following compound 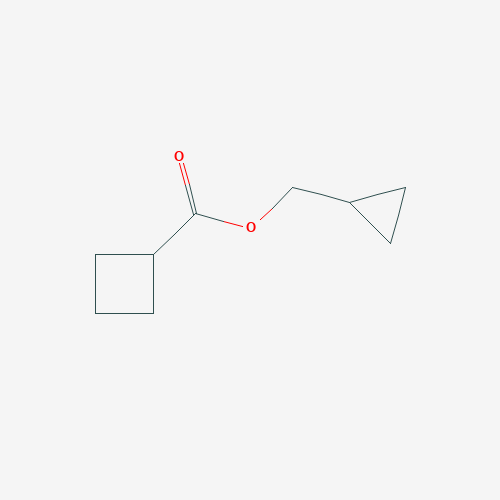 The name is cyclopropylmethyl cyclobutanecarboxylate. All of it makes sense but I don't understand why the suffix carboxylate comes? Why are we writing the single carbon left unaccounted for by using carboxyl ? Kindly clarify.

active oldest votes
1
$\begingroup$
Want to improve this post? Add citations from reputable sources by editing the post. Posts with unsourced content may be edited or deleted.

The group -COO- is called "carboxylate" if it is included in a molecule with some organic radicals attached on its left and on its right-hand side. It is a definition, due to the fact that there is a carbon atom bound to an oxygen atom. Joined together, it makes carboxy. This terminology is used when no simpler way of naming this structure exists.

Examples. The structure CH3-COO- may be called methylcarboxylate. But usually it is called acetate. It is shorter.

The structure C6H5COO- may be called phenylcarboxylate. But usually it is called benzoate, as it is a shorter name.

The names of esters are usually formed by placing the alcoholic component in front of the name of the acid component as a separate word. The corresponding rules in the current version of Nomenclature of Organic Chemistry – IUPAC Recommendations and Preferred Names 2013 (Blue Book) read as follows.

However, that does not completely answer your question why the extra carbon atom is named using the ‘carboxy’ part.

Thus, the ‘carboxy’ part is not used in such simple cases. For example, pentanoic acid is not named ‘butanecarboxylic acid’.

However, the acid component of the ester that is given in the question is not such a simple case since the $\ce{-COOH}$ group does not terminate the chain of the parent structure (the cyclobutene ring). In such cases, the suffix ‘carboxylic acid’ is used instead.