XRF is "non-destructive," but what actually happens to the sample?

Editing for clarity and more details.

My colleague has been using XRF to quantitatively analyze 47-mm diameter Teflon membrane filters for metals, minerals, and rare earths. Much of their analysis has been focused on quantifying metals like iron, steel, and copper. It seems they are looking into replacing their large floor-standing WD-XRF with a benchtop ED-XRF or another floor-standing WD-XRF.

They are also planning to attempt quantification of trace metals that others report to be in the ppt range, so they are considering adding an ICP-MS downstream of the XRF. However, ICP-MS is completely destructive (the membrane filters go through solvent extraction).

My colleague and I discussed that if they were going to put an ICP-MS downstream anyway for trace metals analysis, perhaps it would be better to budget for a benchtop ED-XRF upstream and a more expensive ICP-MS downstream, so that the XRF acts more as a selection mechanism for which filters should be extracted for ICP-MS.

One important question we have is on our assumption that XRF is "non-destructive" to the sample. The membrane filter will certainly be intact after XRF, but will there be some amount of loss of particulate matter that will be significant for trace metals being analyzed in the ICP-MS step of this hypothetical measurement setup?

Thanks for your time and help.

The title of the question is about sample heating by ED-XRF instrument. Yet, OP is wondering its limitations and like to understand what kind of compounds analysts might lose to some sample heating if they switch to ED-XRFs (bench-top?). I hope this may be addressed by MaxW, when OP has said whay kind of samples they are analyzing. However, general knowledge on these instruments would predict both WD- and ED-XRF instruments would heat samples regardless of what kind of instrument is in use, but I'd suggest ED-XRF would heat less than that of WD-XRFs since they are low energy instruments.

Actually, to me, the bigger question is which kind is more sensitive to particular elemental analysis, regardless of sample kind (e.g., environmental or archaeological). My literature survey on the subject indicate that ED-XRF instruments is more qualitative than quantitative toward analysis, specifically towards analysis on low-$Z$ and medium-$Z$ elements (References 1 & 2).

The authors of ref.2 pointed out that the energy dispersive X-ray fluorescence analysis of low-Z-elements can generally be seen as a challenge. They have adjusted the instrument in several ways to get better data. The abstract of the article has well reflected the point:

Photoninduced energy dispersive X-ray fluorescence analysis in total reflection geometry has been applied to low-$Z$ elements. To avoid the absorption in the $\ce{Be}$-window a windowless $\ce{Si(Li)}$-detector has been used. Icing of the detector crystal is prevented by a thin $\ce{C}$-foil. Physical reasons of the low energy background are reduced using a high energy cut-off reflector. Measurements of low-$Z$ elements from $\ce{O}$ ($Z= 8$) onwards are possible and detection limits in the $\pu{ng}$ region are obtained.

Anybody interested in these adjustments should get the article, which has explained them with some depicted diagrams.

On low-$Z$ element analysis, authors of Ref.2 claimed that:

The following diagram from Ref.2 well explained point, which shows exceptional correlation ($R^2=0.995$) of expected to measured concentrations of $\ce{P2O5}$ when WD-XRF is used: 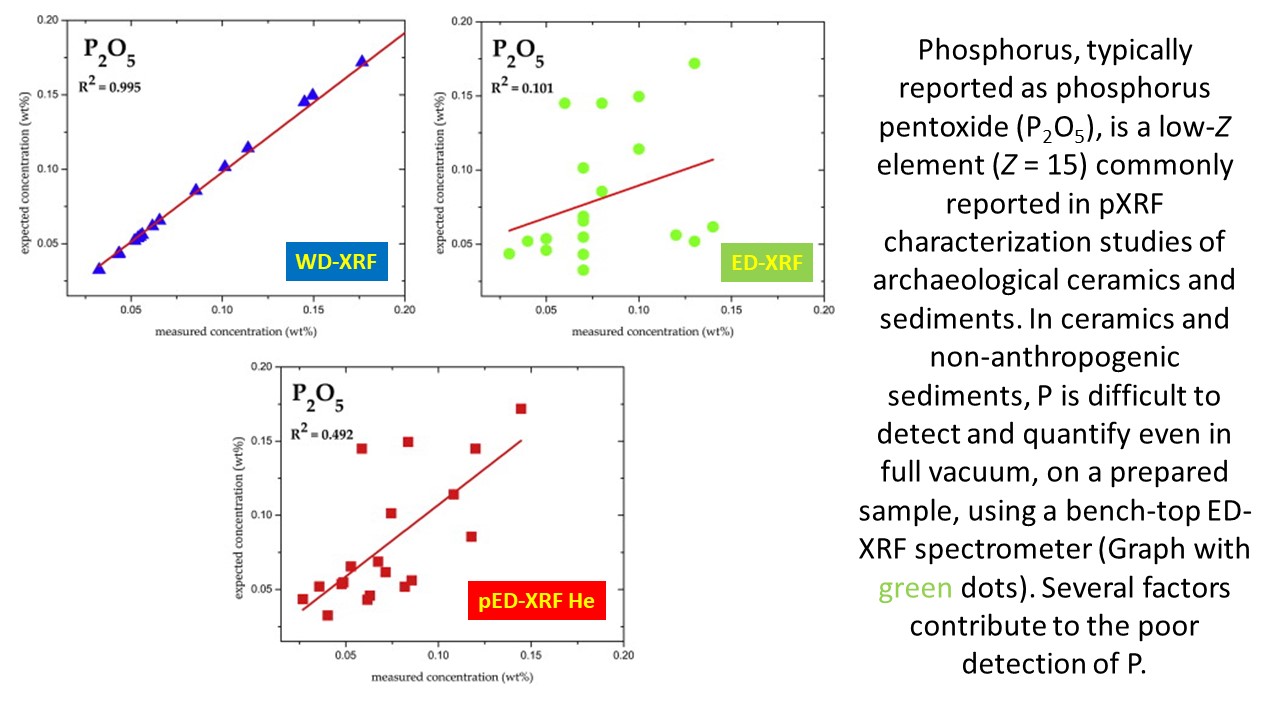 OK, now with more information I can maybe help a bit more...

This seems larger than a "typical" sample. I'd guess that your commercial instrument choices would be very limited by this sample size. (Note that you'd also want to spin the samples for greater uniformity...)

Typical way to analyze such a sample would be to suspend the filter between two thin sheets of polypropylene (or other plastic sheet) with a sample cup. I know such sample cups exist for 1.25 inch discs, not sure about 47 mm. (This might not be totally "non-destructive in that some particulate matter could transfer between the filter and the covering polypropylene. You could always cut both sheets of plastic out with the filter, and digest all three layers for ICP-MS.)

Having a film over the filter would obviously limit sensitivity to lower energy x-rays.

While at IBM there was an analysis of Al/Si films on teflon using a WD-XRF. There was a long term stability problem with the standards in that the x-rays created $\ce{F2}$ gas in the teflon which leached the Si to a volatile silicon fluoride gas.

In general the "raw" samples the rare earths tend to behave very similarly chemically. Thus do you want to analyze a mixture of the rare earths, or a single rare earth that has been purified by processing?

Mixtures of rare earths would be hard with ED-XRF.

Mixtures of rare earths would be also be hard for WD-XRF.

I'd guess that there is quite a bit of data of filter "loading" for air particulate analysis. Basically it would ideal if the amount of particulate matter was low enough so that the sample was infinitely thin. When analyzing dust samples from mines the filter canister was sometimes half full of particulate matter and loose material was sliding around the inside of the canister.

The overall point here is that the infinite thickness for low energy x-rays is very small. So particles might be infinitely tick for light elements and infinitely thin for heavier elements. Thus you might need to use the weight of the particulates on the filter to make a correction.

With WD-XRF one of the ways to see where xrays are hitting a sample is to use a KI pellet. Free $\ce{I2}$ is produced by the ionizing radiation turning the exposed area purple. The technique isn't terribly useful with ED-XRF since the tube power is so low...

4
(How) Does ICP-OES determine the quantity of detected elements, or just their occurance in the sample?
1
What happens if don't use MgCl₂ in buffer solution in Ca²⁺/Mg²⁺ titration?
0
Suppose a heated 5.00 g sample of sodium bicarbonate lost a mass of 1.00 g, what percent of impurity is in the sample?
6
Unknown alcohol sample. Chromic acid negative but iodoform positive?
1
Diluting a sample of weak base before titration. What happens to equivalence point pH of diluted vs undiluted?
2
How to account for dilution in the sample solution when reading calibration standards?