Does H3CO3+ ion exist and what is its structure? [closed]

A protonated carbonic acid (trihydroxymethyl cation) $\ce{H3CO3+}$ does exist, and is in fact incredibly stable in the solutions of superacids [1] up to $\pu{0 °C}.$ One way of obtaining $\ce{H3CO3+}$ is dissolving inorganic carbonates and hydrogen carbonates in magic acid at $\pu{-80 °C}$ [2]:

As for the structure, the $C_\mathrm{3h}$-symmetrical molecule (triskelion shape, structure 7 below) was found to be the global minimum [2] (reference numbers updated):

Protonation of carbonic acid on the hydroxyl oxygen atom (8) was shown to be unfavorable by $\pu{23.4 kcal/mol}$ over protonation on the carbonyl oxygen (7). Frequency calculation at the HF/6-31G*//HF/6-31G* level showed that the structure 8 is not a minimum, as it contains two imaginary frequencies. 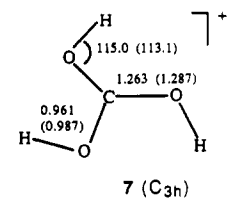 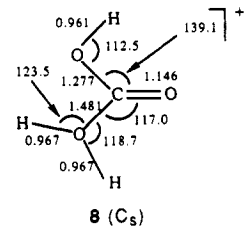 $\ce{H3CO3+}$ shares structural similarities with its triaza-analog, the guanidinium ion, as both are possessing resonance stabilization via their onium forms [3, p. 60].

$\ce{H3CO3}$ does not exist. Why should it exist ? Where does this formula come from ? Of course you are allowed to write any formula you want. It is not forbidden to write $\ce{HC4O3}$ $\ce{H3CO5}$ $\ce{H3C2O3}$ or any other combination of C, H and O atoms that you may think of. Just for fun ! But Nature ignores your fantasy. Nobody has ever been able to make these substances. So these substances do not exist.

Not the answer you're looking for? Browse other questions tagged acid-base theoretical-chemistry molecular-structure carbon-family or ask your own question.

2
What happens to the amino acid when it is in a solution with the pH of its isoelectric point? (zwitterions)
5
If the hydroxide ion is such a poor leaving group then why does water dissociate?
8
Can I make a buffer from two different weak acids or bases?
1
Why do carbon dioxide and sodium hydroxide not form sodium oxide and carbonic acid?
10
Why is picric acid more acidic than carbonic acid?
4
Does H2CO3 exist in solution?
3
Does SiCl2 exist and its possible structure
1
How to find the moles of carbonic acid I need to add to make a solution of KOH acidic
1
Reaction between NaOH and Carbonic acid