Which is the first carbon and which is the second carbon? The numbering scheme should be selected such that it gives the lowest number at the first point of difference. 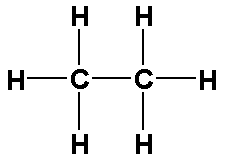 This is ethane structure in which 3 hydrogen of first carbon (1,1,1) and 1 hydrogen of second carbon (2) will be replaced by fluorine

1,1,1,2 tetrafluro ethane is used instead of chlorofluorocarbon [CFC] as it is less hazardous to environment as compare to CFC

17
Are there notable organic compunds which look very similar but have very different properties?
4
Correct nomenclature for reaction types
15
Derivation of formula for the degree of unsaturation
2
Nitrogen lone pair electrons on 2-acetyl-1-pyrroline
5
What is the meaning of parentheses in a condensed molecular formula?
2
Factors controlling enzymatic phosphorylation of D-ribulose 5-phosphate
0
Are polyhydroquinones considered to be polyphenols?
2
what is the structure of bamboo kun?