I wanted to ask a question about the kinetics of an oxidation reaction using chromium reagents.

I was given a lecture today on the mechanism of alcohol oxidations using Chromate (VI) reagents:

My previous knowledge of Rate-Determining steps (RDS) were that on an energy profile diagram, the step with the largest "activation energy" is the RDS as it takes the most energy to go over the steps, so relative the other steps are faster.

For today's lecture, the professor mentioned the following:

If our $\ce{R}$ groups are bulky, which means that you have a bulky alcohol, the alcohol oxidises faster. This means that our Rate Determining step here is the second step and the first step is fast and reversible.

Unfortnuately, this point was not further explained.

I've tried to come up with a simple explanation to myself for two following points:

but I can't seem to find any intuition for this. I only found the logic that there can be slow and fast steps in a reaction. My thought was that all reactions can be reversible, but maybe the second step has such a high activation energy and the reverse process involves so many unlikely species in the mechanism that it seems unlikely to happen. 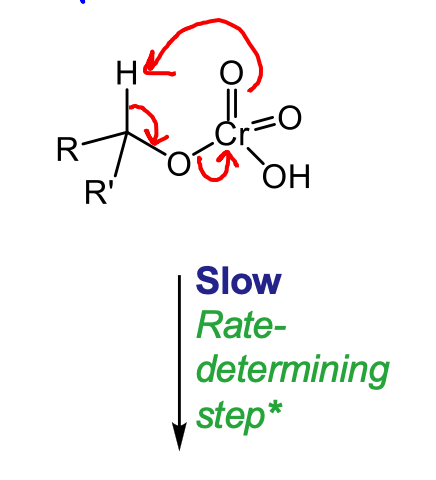 Browse other questions tagged organic-chemistry kinetics alcohols organic-oxidation or ask your own question.

4
Which step below is rate determining