Behavior of NaCl in water with electrodes

If I had some NaCl dissolved in water, it is conductive, so if I were to put two electrodes in the container (powered), what is causing the flow of electrons? Do the NaCl ionic bonds break and the ionic atoms collect at the oppositely charged electrode (how I'd assume electroplating works) with all of the atoms themselves moving to carry current, or are electrons loose in a "sea" like a metallic bond, with some of the atoms being pulled along with the flow?

$\ce{NaCl}$ once in water dissociates, producing $\ce{Na+}$ and $\ce{Cl-}$ ions. Note: this process is possible only because immediately after dissociation ions are solvated by water, i.e. water molecules bind to ions 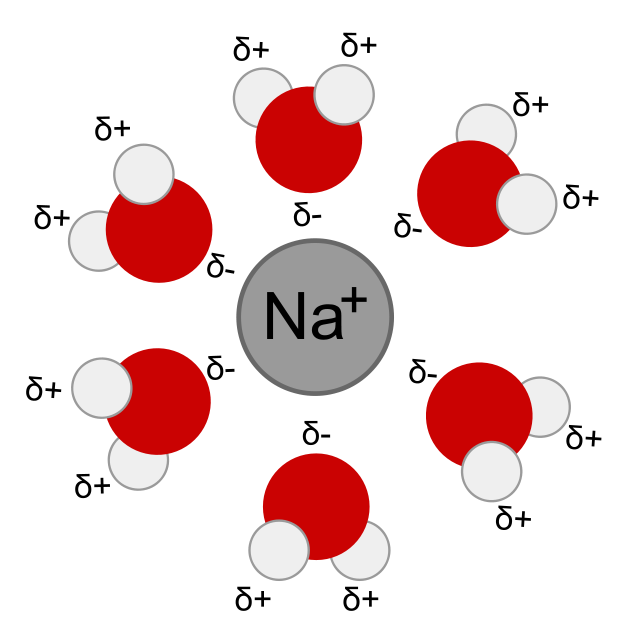 This is releasing energy and increasing effective size of ion, decreasing ion charge density. Once relatively free ions are produced, they can move between electrodes, transferring charge between electrodes. On electrodes ions may discharge taking/giving up electrons, and this is what usually happens with $\ce{Cl-}$ ion. However, if this is not an option, as the expected product is no stable enough in water, water molecule may react instead, producing another ion and either hydrogen or oxygen. This is what happens with $\ce{Na+}$: $\ce{Na}$ is too active to be stable in contact with water, so instead of sodium, hydrogen and $\ce{{}^{-}OH}$ are produced instead, resulting in net reaction (assuming cold solution) $\ce{2NaCl + 2 H2O <=> 2 NaOH + Cl2 + H2}$ with chlorine and hydrogen released on different electrodes.

Not the answer you're looking for? Browse other questions tagged ions electrons conductivity or ask your own question.

5
How is the charge of covalently bonded atoms determined?
5
Ion-selective electrodes
1
Does the speed of an ion affect the current that can flow through a solution?
2
Are Na and Cl ions from NaCl in water separate charged particles?
18
Why is an ionic bond a chemical and not a physical bond?