why Ammonia is proton acceptor

I understand that this is an elementary question, but I tried to find answers which I could not get.

I am trying to understand why Nitrogen in Ammonia is a proton acceptor.

Now as I can see from the structure the octet is complete hence should be stable as it is.

But couple of points here:

1) Nitrogen is more electronegative than hydrogen hence $N$ will pull electrons towards itself. Hence not a good candidate to donate electrons! In addition, the lone pair is in 2s orbital.

2) The other point is the presence of lone pair, it is claimed that this lone pair is more stable if its part of some bond, hence it accepts proton. But if this is the case then lets take the case of Oxygen $O=O$, here each Oxygen atom has 2 lone pairs, and going by the above logic these lone pairs should also participate in bond formation and create an Oxygen polymer(!!), but they do not and Oxygen is quite stable.

Hence with the above points I still could not see why Nitrogen has to accept proton.

The only explanation that I can think of is the lone pair is in 2s orbital and the spread of this electron cloud is larger than electrons participating in bonds. Hence to be stabilized further it accepts a proton $(H_+)$ to form a bond!!

Nitrogen is more electronegative than hydrogen hence N will pull electrons towards itself. Hence not a good candidate to donate electrons!

Yet it makes bonds with hydrogen, as do other electronegative elements (think of hydrogen chloride and water). So polar bonds form in all kind of molecules.

lets take the case of Oxygen O=O, here each Oxygen atom has 2 lone pairs, and going by the above logic these lone pairs should also participate in bond formation and create an Oxygen polymer(!!)

The concept of stability makes sense when comparing two states with the same number of atoms (e.g. ammonia and hydrogen ion vs. ammonium ion). For elemental oxygen to polymerize, each $\ce{O2}$ molecule would bring in electrons. For a molecule to act as base, a lone pair turns into a bond with hydrogen (where hydrogen provides zero electrons and the base provides two). This does not "break the octet" of the base, and give the hydrogen access to two electrons (completing its duet).

It does not have to. It is a weak base. If you add ammonia to neutral water, most of it remains undissociated (the pH goes up, though, because some of it does dissociate).

[devils advocate question:] How can I use electronegativity to predict something about acid/base chemistry?

The trick is to compare green apples with red apples, not oranges with bananas. The easiest comparison is isoelectronic species, such as:

$$\ce{HF vs OH-}$$ Hydroxide is a better base than hydrogen fluoride.

Or you can compare compounds by exchanging O for NH or CH2.

This is more complicated because the carbon atoms lack a lone pair while nitrogen and oxygen have one. So you can compare nitrogen and oxygen using an electronegativity argument, but have to exclude carbon because it can't act as a base without the lone pair (well, $\ce{CH5+}$ does sort of exist but is called a super-acid, so $\ce{CH4}$ is hardly a base).

Here is a set of examples from OpenStax Chemistry 2e showing some of the trends across the periodic table. Again, $\ce{CH4 and SiH4}$ don't have lone pairs, so they can't be bases, even though the trend suggests they might be the strongest base in the series. The reason that water is described as neutral is not some special property of water but because the pKa is typically defined in aqueous solution, and a neutral pH references the hydroxide and hydronium concentration in pure water. If liquid ammonia were our solvent of choice, that would be the "neutral" case. 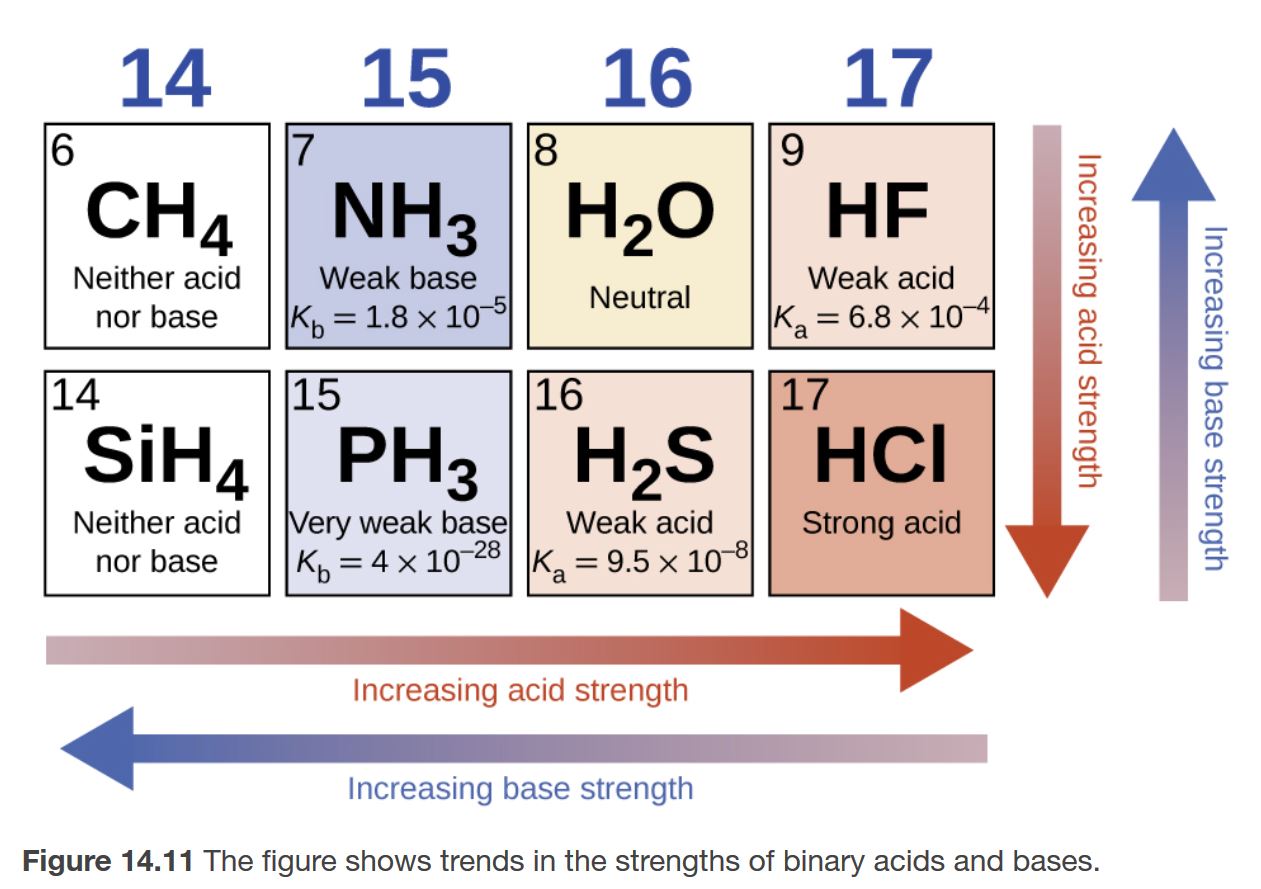 "I am trying to understand why Nitrogen in Ammonia is a proton acceptor."

I am going to modify your question slightly: it is a proton acceptor in aqueous solution. Water, being the solvent of life and being very common on Earth, is generally the most pertinent solvent. Ammonia is a proton acceptor, or if you prefer an electron-pair donor, in water.

"What about the oxygen in water?" you ask. It too, is a proton acceptor, having two exposed electron pairs. In water solution, it is a weak acid, generating a hydrogen ion concentration of 10^-7. Water is a very strong base, or proton acceptor, in sulfuric acid solution. So strong that there is a strict rule against adding water to any strong base.

There is plenty of internet material on Classical (or Arrhenius), on Bronsted-Lowry; and on Lewis acids and bases. Also quite a bit on autoprotolysis (or autoionization) of water and other solvents. Khan Academy has clear, comprehensible writing on these subjects.

Not the answer you're looking for? Browse other questions tagged acid-base biochemistry or ask your own question.

0
Strongest B/L Acid Which Can Exist (Leveling Effect)
1
Ammonia and hydroxide ion - Lewis basicity
12
Why is ammonia so much more basic than water?
9
Why is carbon dioxide considered a Lewis acid?
7
Formation of zwitterion from amino acids
0
Lewis Acid / Base reaction for SO2 and H2O
6
Comparing the basicity of heterocyclic amines