If I'm not wrong, I learned in 2011 introduction to neuropsychology course that all enzymes are proteins.

As far as I know, any protein, not even the smallest of the TAL group (which I understand to be the smallest currently known protein group), can be represented on a common-size two dimensional diagram (say, A4 page size) simply because it's too big in comparison to other molecules (such as methylcobalamin).

If bromelain is an enzyme which is larger than, for example, TAL proteins, how come it is represented on a common-size two dimensional diagram in PubChem?

I was forced to look at the wikipedia entry for enzyme, which states:

Enzymes /ˈɛnzaɪmz/ are macromolecular biological catalysts that accelerate chemical reactions. [...] Most enzymes are proteins, although a few are catalytic RNA molecules. The latter are called ribozymes. [Enzymes' specificity comes from their unique three-dimensional structures.]

The definition encompasses a rather broad range of molecules (macromolecular biological catalysts), is more of a functional rather than a structural definition, and requires clarification of what is meant by macromolecular. Also, not everything the wikipedia says should be accepted as consensus, of course.

This is an interesting question. For one thing, it challenged my biased view of enzymes as proteins (even if I know of ribozymes). I don't usually think of glycoconjugates as enzymes, but there you go, you have presented such a case. However, this is the structure shown in pubchem: 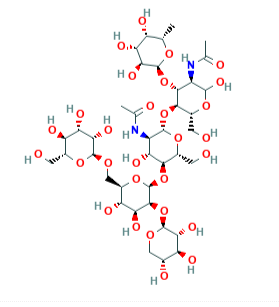 I see a couple of amide bonds, but mostly I see sugar rings, consistently with the description of the molecule:

And yet the wikipedia says that "Stem bromelain (SBM) (EC 3.4.22.32), is a proteolytic enzyme". That's because I also missed the fine print: the pubchem entry is for MUXF, carbohydrate moiety of bromelain (hat tip to Ivan). Bromelain itself is a glycoprotein. And I am still looking for an experimental 3D structure to go with the molecule. Heading down another rabbit hole, the best I could do for now is find a link to a theoretical structure (Ref. 1): 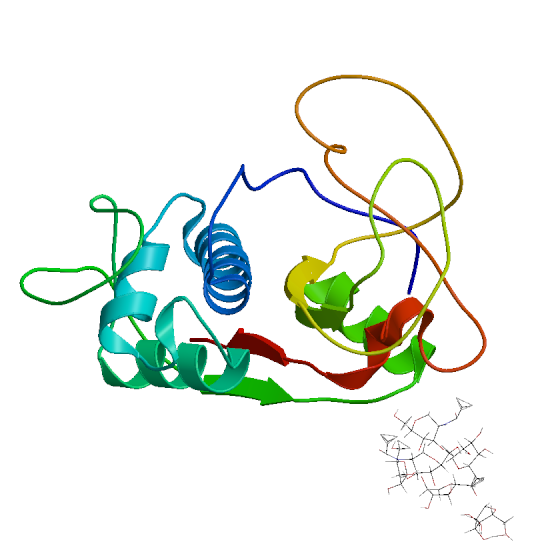 A polysaccharide, attached to a folded protein, is shown in the lower right of the image.

So you opened up your post with a false premise, that all enzymes are exclusively polypeptides. Some of them, such as bromelain, are glycoconjugated proteins. And some such as ribozymes lack a peptide component altogether.

Finally, as to why the hexasaccharide is presented in 2D rather than as protein enzymes usually are, as a folded 3D structure, pubchem explains (see under 3D structure):

Conformer generation is disallowed since too many atoms, too flexible

I think I got it. The diagram in PubChem is not bromelain molecule, but a tiny fragment of it. This thing is indeed too small to be an enzyme. Also, it has nothing to do with proteins. Look at the formula, there is not a single amino acid residue here. Indeed, scroll down to 3.4.2 and read: "carbohydrate moiety of bromelain". That's what it is, and not the entire enzyme.

If you want to know what the rest of it is made of, then google "bromelain amino acid sequence". It seems to be known for quite a while. No nice pics, though.

On a side note, there is no such thing as "the smallest protein" or even "the smallest known protein", for the border between proteins and polypeptides is rather arbitrary. You are right, though, in that most enzymes are huge proteins, too big to fit on a 2D diagram. So is bromelain.

There is a recent crystal structure of a bromelain precursor protein.
PDB Entry 6U7D http://www.rcsb.org/structure/6U7D Usually "precursor" means that the active form of the protein is formed by cleaving off a piece or pieces. I do not know if that is the case for this protein. However the protein used to grow these crystals was expressed in E. coli, so it does not contain the glycosylation characteristic of proteins produced natively in eukaryotic cells. If you are interested in the sugar residues of the native form, this crystal structure will not help you.

5
How does the human body process Bromelain in pineapple? (A meat tenderising/dissolving enzyme)