Meaning of depiction of atomic orbitals

There was a section about atomic orbitals in my organic chemistry textbook that I did not quite understand. First the author explained a bit about the Schrödinger equation, which I understood to be (vaguely, they did not go to any detail, even omitting the formula all together) a equation that describes the likeliness of positions of an electron in 3d space. $\Psi$ (i.e. the Schrödinger equation) can be solved for different quantum numbers that respectively represent the different orbitals.

This made me wonder what a picture (like below) of an orbital actually depicts, as it are chances that are described by $\Psi$, not boundaries. My best guess was that such picture represents an area that has a high chance, say 90% or more, of containing the electron (how they determine the shape, I don't know, but my best guess again here is that they only take those parts of the real orbital that add a significant percentage to the total chance of the electron actually being in the depicted orbital).

Are all these assumptions right? 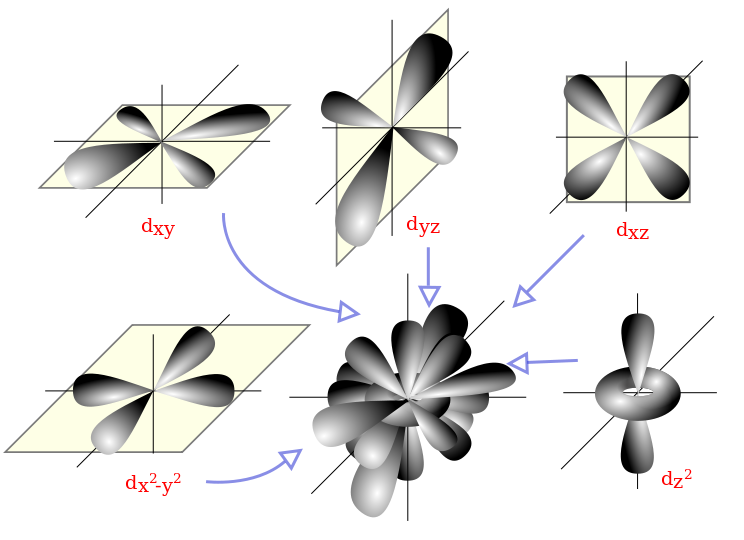 Without going into a long discussion about what the wave function is, I will try to briefly answer your questions:

1) For atoms, the (approximate) solution to $\Psi$ is the product of two functions:

2) Since the radial components of each component extend quite far, decaying to zero only at infinity, it would be very difficult to make a plot of the 3D object on a 2D surface that does not cover up the features that would be nearer the nucleus (further from eye), without using varying degrees of transparency.

The spherical component is usually solved analytically using complex numbers (i.e. a+b*i) but they can be transformed into real values by linear combinations. So, instead of two "channels" for real/imaginary, we can use only one "channel" (real) for each function, 1s, 3dxy, etc. Often, these are colored so that if the sign of the real function is positive, it is e.g. red, otherwise, e.g. blue.

A second feature of these types of graphics is called the "isosurface"--which means, plot only if the value of the function is equal to a chosen value. Sometimes the chosen value is taken to be "90% of the corresponding electron density contribution from this atomic orbital is enclosed" (which, b.t.w. is $\Psi^* \Psi$ or simply $\Psi^2$. Though $\Psi$ may be real/complex/negative/positive valued (hence need all sorts of colors and "channels" to represent it) the electron density is positive and real. This is very important, as complex quantities are not observable, but are rather mathematical constructs (vehicles) for arriving at things that are actually observable, such as the electron density.

But practically speaking, in order to see certain features like the doughnut in $dz^2$, people play a little fast and loose with precisely what the value of the isosurface is.

The shading on the surfaces that you have provided could be misinterpreted, because the colors do not correspond in any way to the value of the function being plotted, but rather seem to be an aid to the volumetric rendering of an isosurface that has already been set to either the absolute value or the square of the atomic orbital.

Finally, note that in your center drawing, which adds all of the individual atomic orbitals, that you are beginning to form a sphere. It had better, as atoms are, in fact, spherical!${}^{\dagger}$ The formal name of the functions are spherical harmonics, and the set of e.g. $p_x$, $p_y$, $p_z$ or the five $d$'s taken together form a spherical shape.

What I understand of orbitals is simply that ELECTRONS can not be pin-pointed accurately, because they are in continous motion and that too not in a fixed circular path (as Bohr had depicted), so it is virtually impossible to know where an electron is in an atom. So scientist found a way to counter this problem by providing another model - THE QUANTUM MECHANICAL MODEL of the atom, where instead of electrons residing in orbits, it was stated that electrons have a possibility that it may reside in a particular region - what we call as orbitals. It is quite intresting to note that the probality of finding an electron never becomes 0, which means an atom in USA can have its electrons in Australia (atleast in theory).

10
Syntax and Typography of Atomic Orbitals

4
How are the hydrogens attached to the nitrogen atom in the ammonium ion?
3
What is the difference between these wave functions?
8
Significance of phase of atomic orbitals
4
Hybridisation and the Schrödinger equation
16
Are all degenerate d-orbitals identical?
0
Why is atomic orbital one electron wave function? Why distance from centre is proportional to angular wave function?
1
Why are s orbitals more “penetrating” than p orbitals?