Entropy as an intrinsic property of matter

I would like to ask how we can see entropy as an intrinsic property of molecules, namely as something depending also on their geometry (and not only as gross disorder). Is this what is called the "shape entropy" or there's no relation between the two concepts? Which are the parameters that determine this "geometric" or conformational entropy?

EDIT: The answer written by Buck Thorn provides an interesting mathematical insight of entropy considering the conformations or "geometries" available to molecules in thermal equilibrium.

Is there also a qualitative analysis of this phenomenon (in terms of the possible conformations playing a role in entropy - the parameters I was referring to in the question)?

You can use the tools of statistical mechanics to compute the entropy of molecules in thermal equilibrium.

For molecules in an ideal gas the molar entropy is $$S=R\ln z +RT\left(\frac{\partial z}{\partial T} \right) _V - R \ln N_A + R$$ Here $z$ is the molecular partition function $$z=\sum_i e^{\epsilon_i/kT}$$ where the summation extends over all states available to a molecule and $\epsilon _i$ is the energy of state $i$ (states degenerate in energy are counted separately).

If you can identify all the possible conformations ("geometries") available to the molecule and their respective possible energy states, you can use the formula to compute the entropy.

You might invoke Boltzmann's equation $$p_i=\frac{e^{-\epsilon_i/kT}}{z}$$ to compute the probability of finding a particular molecule in state i.

As an example consider an idealised/simplified model of butane, which has trans and gauche configurations as shown in the figure. We shall suppose these have different energies due to interactions between the protons on carbon $1$ and $4$ as bond C2 to C3 rotates. 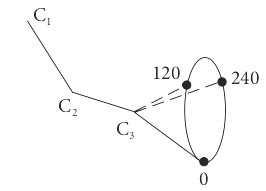 Once the partition function has been found then the entropy $S$ can be calculated as can the internal energy $U$ and other thermodynamic quantities; $\displaystyle U=RT^2\left(\frac{d\ln(Z)}{dT}\right)_V;\; S=R\ln(Z) +\frac{U}{T}$.

If you calculate the conformational entropy you will find it is zero at low temperatures, because all molecules are in the lowest trans state, and rises to 3R at high temperatures.

Try not to think of entropy as disorder, it is generally more useful to think of it as the number of ways of placing the molecule in its many possible energy states.

Not the answer you're looking for? Browse other questions tagged thermodynamics entropy or ask your own question.