I have done an experiment where I dissolved four different substituted phenols in acidic, basic, and buffer solutions, and recorded the UV-Vis spectra for each. I'm supposed to pick a wavelength where the absorbances for the protonated, normal and dissociated forms are very different. I then use these equations given to me to calculate the $\mathrm{p}K_\mathrm{a}$ of that phenol:

where $x$ is the mole fraction; $A$ is the absorbance in corresponding medium, and

I've calculated the $\mathrm{p}K_\mathrm{a}$ values of each phenol, but none of them are close to literature values. I'm not sure what I've done wrong. Can anyone help explain these equations and any ways I could have messed up?

By consequence of this, the recorded total absorbance $A_\mathrm{t}$ for system, assuming only the acid and its anion absorb light in the region inspected, equates to

with $c_\mathrm{t}$ as total concentration; $\varepsilon$, the absorption coefficient; and $d$, the optical path length.

For one, you record a spectrum at low pH to convert all of your sample into the acid form ($c_\mathrm{t} = c_\mathrm{HA}$, and $c_\ce{A^-} = 0$) where all absorption is due to the acid. Equally, you record a spectrum at a pH this high that all or your sample is deprotonated (then $c_\mathrm{t} = c_\mathrm{A^-}$). You need then spectra between the two extrema, with some of $\ce{HA}$ in presence of some of $\ce{A-}$, because the proportion of the concentrations of acid to its anion may be expressed by

This is why you search for the isobestic point, where the absorption spectra recorded do not vary while varying the pH value of your analyte, and where $\varepsilon_\ce{HA} = \varepsilon_\ce{A^-}$. 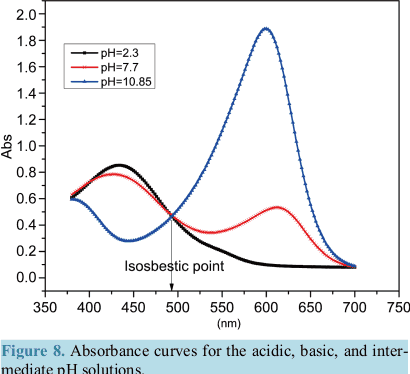 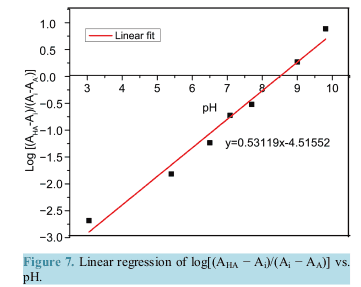 To put this into perspectivive, the arithmetical mean of the four methods compared in Salgado's paper equals to $pK_\mathrm{a} = 8.277$. Possibly, the difference between their result and the «recuperation» here were smaller if either a) WebPlotDigitizer were used with a lesser data increment, b) using an interpolation / smoothing function among the data extracted by the program, c) figure 7 were reconstructed from their figure 4.

Not the answer you're looking for? Browse other questions tagged acid-base ph phenols uv-vis-spectroscopy or ask your own question.

5
How to calculate the concentration of conjugate acid from given pH and pKa values?
2
pKa of Tris corrected for ionic strength
1
Determination of pKa by absorbance and pH of buffer solutions
3
Equation for the equilibrium constant for the hydration of carbonyls using UV spectroscopy
2
Why is UV-Vis Spectroscopy not like IR Spectroscopy
0
Finding the pH of a mixture of weak acid and strong base
1
Calculating pH of aqueous ammonium hydrogen sulfide solution