What is a material more easily cut than shattered? [closed]

Ask Question
Asked 9 months ago
Active 9 months ago
Viewed 48 times
1
$\begingroup$
Closed. This question needs to be more focused. It is not currently accepting answers.

I'm currently developing a sci-fi concept for animation which partially involves a typical "the earth has been overrun by XYZ" scenario.

One of the ideas for XYZ we're thinking of is a species of intelligent crystalline beings made of diamond -- or at least a diamond like material. These are large, arachnoid in shape and fast. They kill by piercing their pray with sharp, lance-like protrusions on the ends of their forelegs.

The problem is, thus far we've been thinking that the trick to killing these things has been 'shattering' what essentially equates to a CPU or central core suspended like the 'body' of your typical daddy long legs. Which makes sense if the material were diamond -- however we realised it might be more interesting if kinetic force like cannonballs and explosive shockwaves were less effective, and that the key was 'cutting them.'

Maybe we're bad writers, and we just can't drop the idea of our protagonist being forced to use a 'chain-blade' up close to combat one of these things, but visually we're very keen on just such a scenario. So if those among you more educated than us (i.e. all of you) could point us towards a material where 'cutting' or 'sawing' with what could be called 'super-chainsaws' is more feasible than explosives, large projectiles, or other methods of blunt force, it would be greatly appreciated.

We Do understand just such a material will probably not exist in crystalline form, thus losing the overall aesthetic we're aiming for -- but nonetheless we'd love to hear what you guys have to say in general regarding the question and context.

Thank you very much for your time.

The crystalline property that would allow to cut the "diamond creature" (or whatever those things are in your universe) you are looking at is cleavage (a writer might also use a term in a wordplay). In crystallography, cleavage is the ability of crystals to crack or split in certain crystallographic directions. This mechanical property of crystalline media is associated with their internal structure (the ratio of adhesion forces in the crystal lattice) and does not depend on the external shape of the crystals. This property is also often utilized in the beginning of the process of fashioning the gemstones.

There is a fascinating demonstration with explanation: Crystals - Alan Holden 1958 (YouTube).

With diamonds you can do that too, just not always as easily as with mica: Diamond Cleavage (YouTube). Diamond (as well as ﬂuorite, galena, topaz and some other minerals) possesses a so-called "perfect" cleavage, and the cleavage planes in diamond are parallel to the octahedral crystal faces [1, p. 30]: 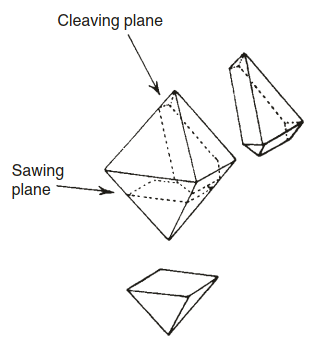 Figure 4.1 Two examples of directional-dependant properties in diamond. The cleavage planes are parallel to the octahedral faces, which are also planes of near maximum hardness. The easiest direction for sawing is at right-angles to the dodecahedral plane, which is also the plane of minimum hardness.

Not the answer you're looking for? Browse other questions tagged inorganic-chemistry physical-chemistry crystal-structure crystallography chemistry-in-fiction or ask your own question.

3
Is it possible to cut yourself on pyrite?
5
What does delta letter mean in some ceramics chemical material formula?
1
On biological detergent breaking down organic material
9
What are AE Salts?
1
What about Miller Indices of planes passing through origin?
4
What is the Crystal System of MoS2?
7
What is the @ symbol used for in material science?