I am trying to figure out the structure of the compound $\ce{C3H5NO}$ given just the following data from the 1H NMR spectrum:

From 2-2-1 combination I have the following candidates:

Only the first and second one satisfy the multiplet data but I can't understand how their chemical shifts are so high. For a $\ce{-CH2}$ adjacent to $\ce{-C#N}$, the chemical shift reaches the value around $1.3 + 1 = 2.3$ but the given values are almost thrice of it. The $\ce{-OH}$'s proton's value seems fine nevertheless. Can anyone explain the reasoning behind the two other values? Or is the compound I have predicted wrong?

Dhruba Charan Dash published the problem in his analytical chemistry textbook (ISBN 9788120353008). This is the picture that goes with the question: 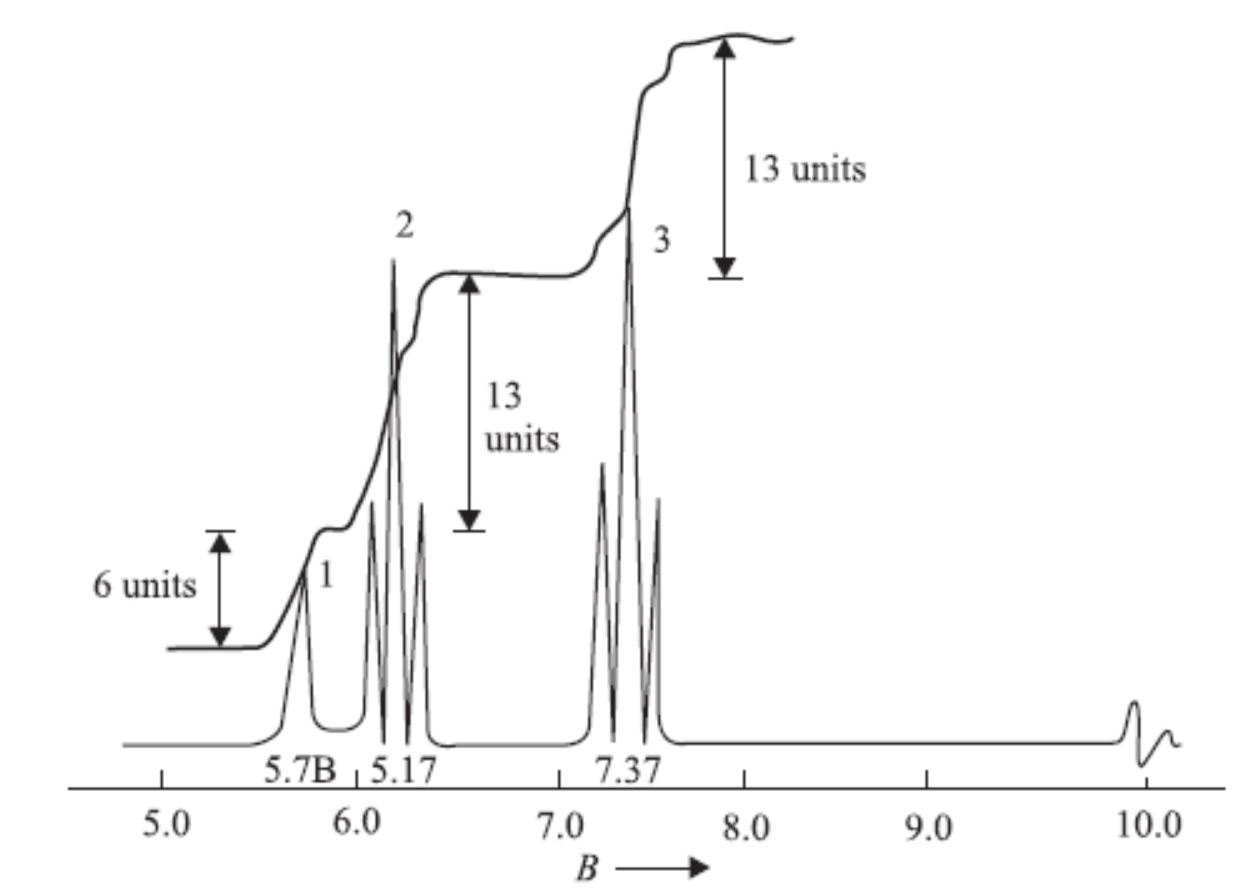 Notice that the scale of the chemical shift increases with the strength of the magnetic field $B$. This means they are using the $\tau$ scale instead of the $\delta$ scale. The modern description of the signals would be $\delta = 10 - \tau$, where $\tau$ is the value given in the figure.

For completeness, I will post the answer given by the author Dhruba Charan Dash:

PROBLEM 13.17 PMR spectrum of the compound $\ce{C3H5ON}$ in an acidic medium is shown below. Suggest its structure. Given that the peak 1 disappears in the presence of $\ce{D2O}$.

Solution Analysis of the spectrum:

(i) Since the peak 1 disappears in the presence of $\ce{D2O}$, it may represent a group containing active hydrogen. This group may be a hydroxyl group.

(ii) The peaks 2 and 3 must represent the hydrogen atoms attached to the methylene group.

(iii) The analysis of integral trace indicates the presence of 1, 2, and 2 protons within the peaks 1, 2 and 3 respectively.

The point (iii) suggests the presence of two methylene groups. These must be attached each other (point (ii)). The only structure consistent with the above facts is $$\ce{HOCH2CH2CN}$$

It is clear why the question posed by the OP (and by the teacher of the OP, as I learned in chat) was hard to solve. A single problem transcribing the question (replacing $\tau$ with $\delta$) obfuscated the intended chemical shift values.

For reference, here is the problem as presented to the OP:

I'm writing this to show there is no solution. I'm hoping there is a flaw in my argument leading the way to a solution.

The key question, as the OP already stated, is what the two 2H triplets at 6.2 and 7.4 ppm arise from. As they are the only multiplets in the spectrum, it makes sense to assume they couple with each other. If we had an image of the spectrum, we could get the coupling constants for more information, but we don't.

This fragment occurs in the first two of the OPs three suggestions, and gives two triplets as seen in the spectrum. As the OP discusses, the problem is the chemical shift. No matter what the fragment is connected to (even directly to O or N), chemical shifts will not reach 6.2 and 7.4 ppm.

One way to get higher chemical shift is to have olefinic hydrogens. The problem is that we need two equivalent hydrogens (same chemical shift at least). If the fragment shown above is built into a symmetric molecule without coupling to anything else, it would give two triplets. However, the chemical shift of the central two hydrogens is nowhere near 6.2 ppm. Also, for the specific molecular formula, the only atoms left are one H, O and N each, so you run out of carbon atoms.

Other ideas to get the chemical shift near 7 ppm

You could have a fragment like $\ce{-CH2-NH2}$, but usually no coupling is observed for structures such as those. You could invoke some co-solvent effect that increases chemical shift (lanthanide shift reagents?). You could consider a pair of cation and anion, or very small rings to open up the range of compounds, but none I tried solve the fundamental problem.

So my tentative answer is that there is no compound with a spectrum such as the one described.

Thanks to the fine work by Karsten Theis the remaining task is much easier (well, it's actually possible; please read the answers by Karsten Theis which explains that the shifts reported in the OP are incorrectly referenced). The corrected chemical shifts (from his answer) are:

You can use chemspider to generate a library of plausible compounds: 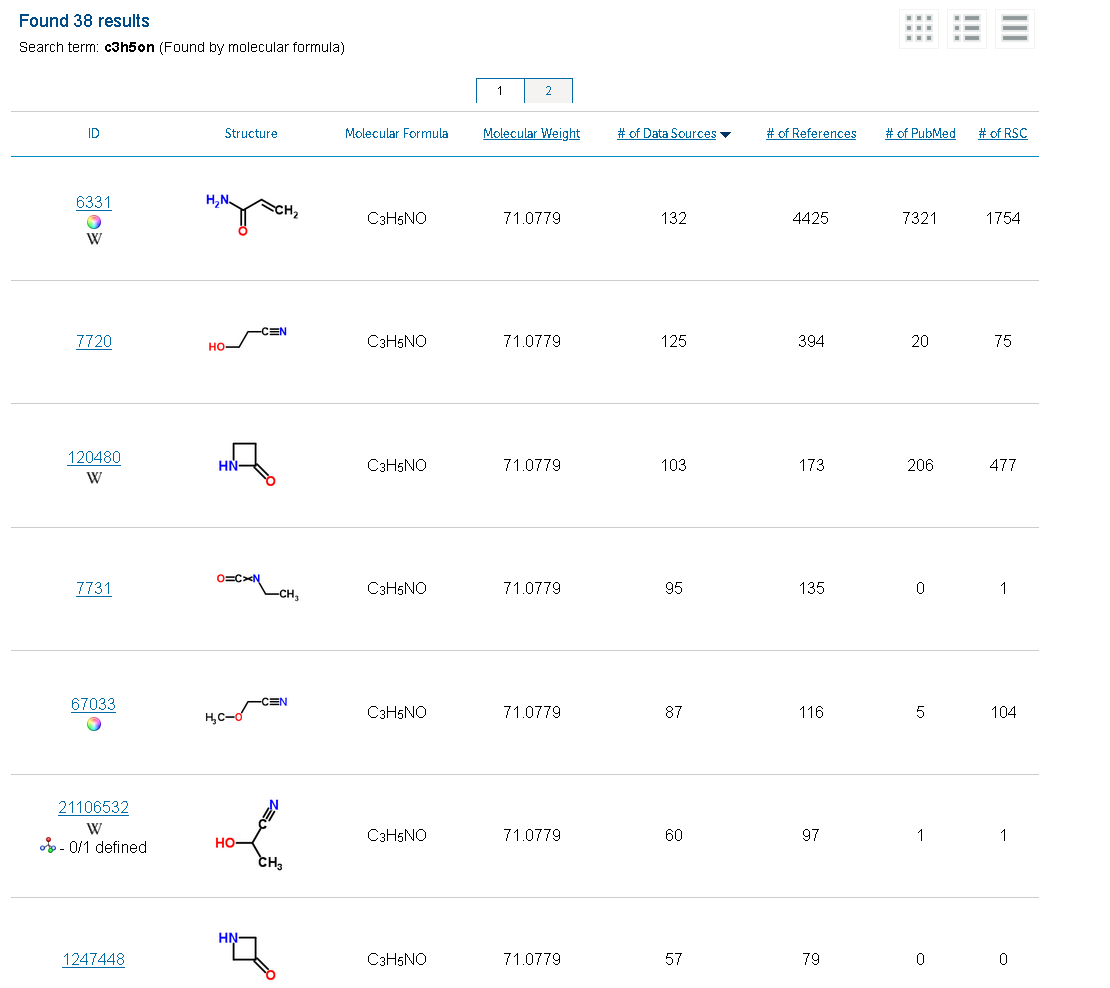 and screen the compounds based on expected shift and multiplicity patterns or a spectral simulator: 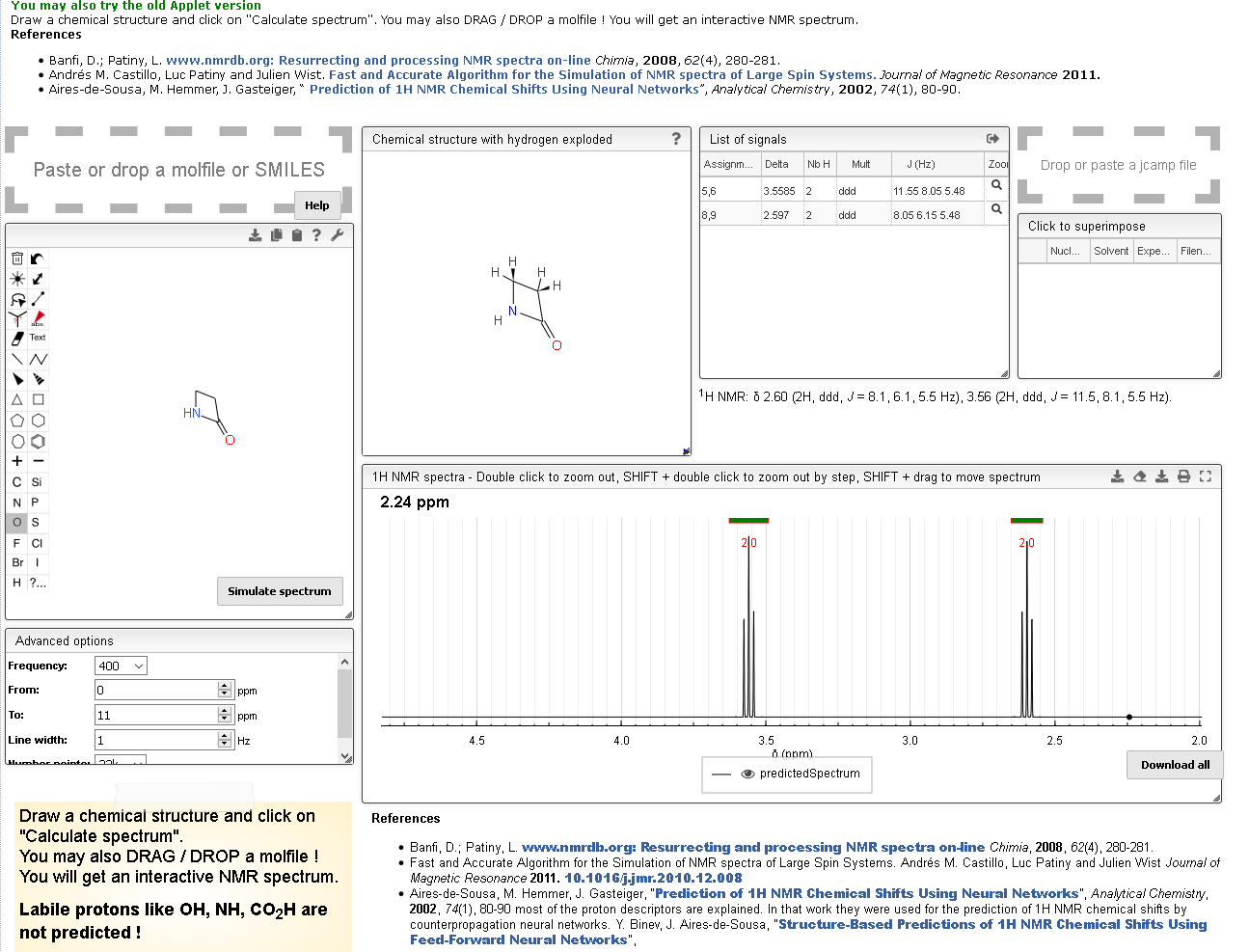 Note that the triplets are apparent (the geminal protons are not magnetically equivalent). Couplings from NH to the neighbouring aliphatic protons are not resolved due to exchange or relaxation, resulting in an effective broadened singlet (the exchangeable NH proton is not included in the simulation by the program). The protons vicinal to nitrogen, resonating at $\pu{3.8 ppm}$ in the OPs spectrum, are presumably shifted downfield due to deshielding caused by H-bonding to NH by the solvent (water, at most partly deuterated in the OP spectrum, for otherwise the NH signal would not be visible).

The tricky compound appears to be azetidin-2-one.