Ask Question
Asked 3 months ago
Active 3 months ago
Viewed 96 times
-2
$\begingroup$
Closed. This question is off-topic. It is not currently accepting answers.

We can explain chemical anti-bonding just using the Pauli repulsion correct?Let's take He2.

2 atoms of He share 4 1s electrons and since the magnetic spin for electrons has 2 values there would be 2 electrons with the same wave function which would violate the Pauli exclusion principle.This makes He2 unstable and it disassociates in 2 He atoms

The reason we speak of orbitals as being exclusively inhabited by 2 (max) electrons (with opposing electron spin quantum number) is because electrons are fermions and therefore observe the exclusion principle. The exclusion principle constrains the allowed electron configurations, disallowing occupation of lower E orbitals by more than 2 electrons. In the case of $\ce{He2}$ it requires occupation of orbitals that raise the total E above the energy of the atoms at greater separation. So, in a word, the answer is yes.

The wikipedia entry on the Pauli exclusion principle alludes to its role:

It has been shown that the Pauli exclusion principle is responsible for the fact that ordinary bulk matter is stable and occupies volume. This suggestion was first made in 1931 by Paul Ehrenfest, who pointed out that the electrons of each atom cannot all fall into the lowest-energy orbital and must occupy successively larger shells. Atoms, therefore, occupy a volume and cannot be squeezed too closely together.[12]

I should add that dispersion interactions mean that there actually is a very weak attractive interaction between He atoms before the repulsive term "kicks in". See e.g. this wikipedia description of the London dispersion force, which has this illustration of the potential between two Ar atoms: 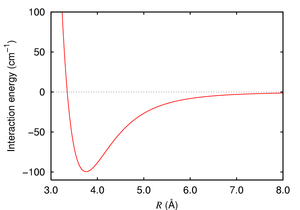 See also the table at the bottom of the wikipedia article, which explains that for the Ne dimer, dispersion contributes 100% of the total intermolecular interaction energy (I would modify that perhaps to attractive interaction).

Not the answer you're looking for? Browse other questions tagged inorganic-chemistry quantum-chemistry or ask your own question.

32
Pauli exclusion principle and resonance
31
Is there an energy cost associated with flipping the spin of an electron?
4
VSEPR theory, chemical bond and quantum mechanics
16
What exactly is meant by 'multi-configurational' and 'multireference'?
1
Why I can't use a single Slater determinant to describe the ground state of open-shell atoms and molecules?