What is the heaviest element of the periodic table for which there is a compound whose crystal structure has been completely resolved by X-ray diffraction?

Since there were no further suggestions, I decided to use the references from my comment in an answer, which, I believe, is element 99, einsteinium.

Looking both at the end of periodic table of elements and these two constrains, I suspect it is unlikely that current techniques can be applied for transfermium elements and fermium itself as we neither have the necessary amounts nor time.

Among transuranium elements with $Z < 100$ plutonium $\ce{_{94}Pu}$ compounds appear to be of the greatest interest and probably the greatest number of published structures, too. However, einsteinium $\ce{_{99}Es}$ exists as several relatively stable isotopes with half-lives of the magnitude of months and days and has a somewhat developed chemistry to speak of.

In 1968 Fujita et al. [1] having 3 μg of $\ce{^{253}Es}$ synthesized and reported crystal structures of einsteinium(III) chloride $\ce{EsCl3}$ and einsteinium(III) oxochloride $\ce{EsOCl},$ both determined via powder x-ray diffraction. Reading the full text is encouraged, mainly to admire authors' ingenuity in overcoming technical difficulties (self-contamination of the isotope, film darkening by radiation, measurement of lattice parameters in temperature range from the room temperature to over 400 °C and so on) and overall concise writing style of the report.

$\ce{Es^3+}$ in both structures has C.N. 9 and coordinates in a single-capped square antiprism ligand environment: 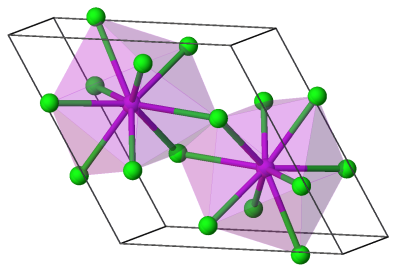 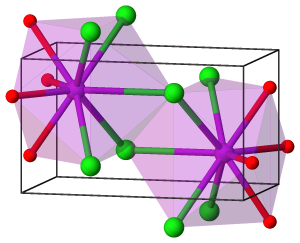 A few years later Haire and Baybarz [2] determined crystal structure of einsteinium(III) oxide $\ce{Es2O3}$ via electron diffraction, but this is another story.

Not the answer you're looking for? Browse other questions tagged analytical-chemistry crystal-structure elements x-ray-diffraction or ask your own question.