I have the following two spectra (IR and 1H-NMR) see below.

From the IR, I can see that there's no broad peak around 2500-3300, thus I can rule out any carboxylic acids and alcohols.

Then I'll look at the sharp peak at 1734 which makes me suspect an aldehyde.

From the H-NMR I see the following:

This is where I run into some issues.

I see peak a and c as -CH2- groups next to another R-CH2-, but in two different chemical environments.

And I suspect that peak d might be caused by two benzene rings (2x5H=10H) in a symmetric molecule, like; Ar-R-Ar but I can't stitch these informations together to something useful.

I hope that someone can help me out. 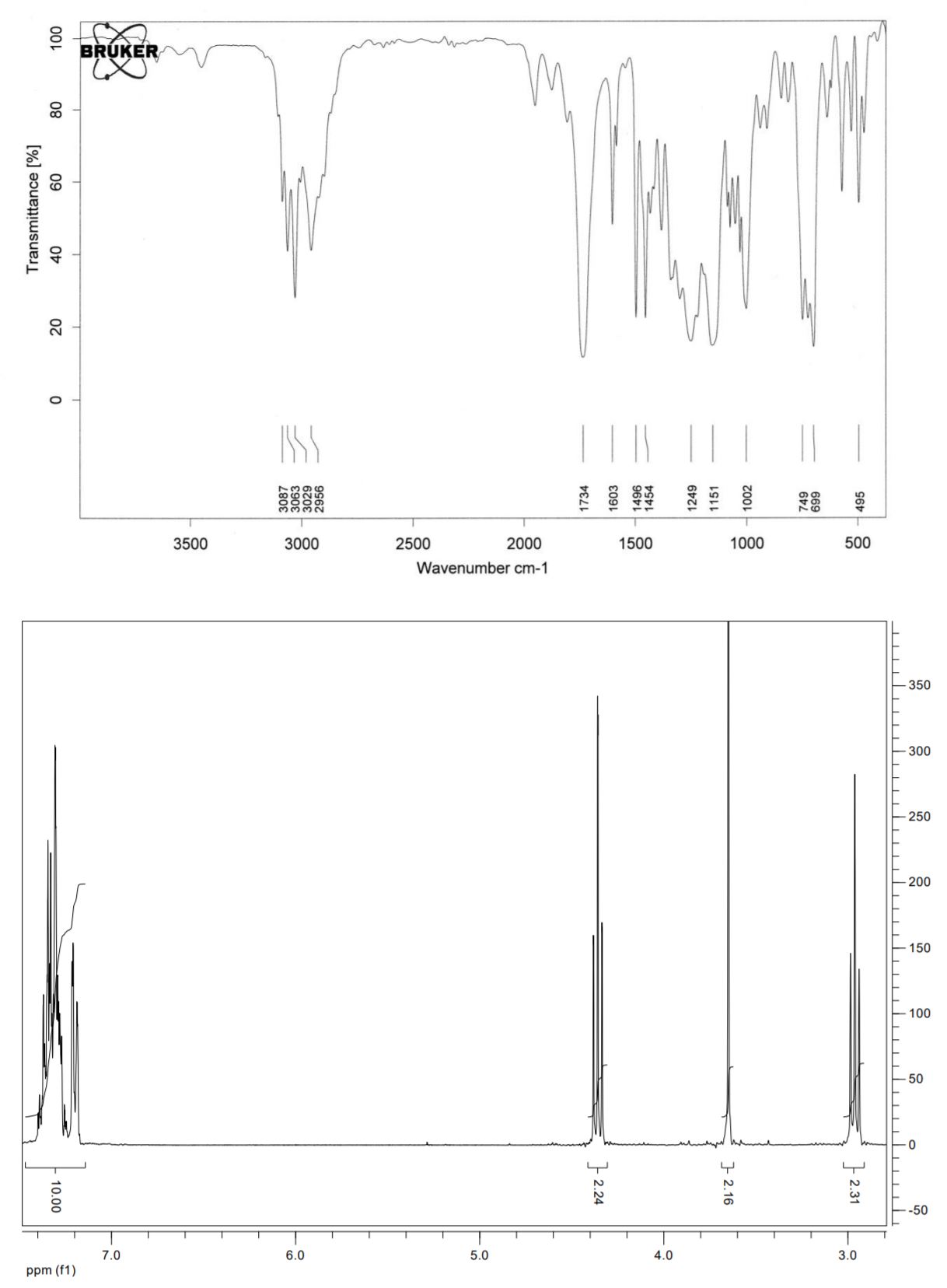 This is not a hard question when compared to other questions of same kind. The first easy clue is the molecular formula, which is already given. That make your life much easier. The given molecular formula for the compound is $\ce{C16H16O2}$, hence you can determine the degree of unsaturation of the molecule ($\ce{C_nH_nO_x}$):

Based on $\ce{^1H}$-$\mathrm{NMR}$, you correctly proposed that there are two mono-substituted aromatic nuclei in the molecule, since there is a 10-proton multiplet ($2 \times 5\ce{H} = 10 \ce{H}$) in the aromatic region ($\pu{7-8 ppm}$). However, instead of your suggestion of two symmetric aromatic rings like $\ce{C6H5-R-C6H5}$, these two phenyl groups are not probably identical rings. That because, you can see a clear 2-proton doublet (not 4-proton) at around $\pu{7.2 ppm}$, separating from the rest of 8-proton multiplet. Regardless, these two aromatic nuclei would count for 8 degrees of 9 possible unsaturations and $\ce{C12H10}$ portion of the molecule leaving only $\ce{C4H6O2}$ to be accounted for.

The presence of strong peak at $\pu{1734 cm-1}$ in given FT-IR spectrum suggests that there is a carbonyl group in the molecule. As you suspected, it is neither a carboxylic acid group (absence of broad peak at $\pu{2500-3300 cm-1}$ in the given FT-IR), nor an aldehyde group (absence of 1-proton resonance at $\pu{9-10 ppm}$ in the given $\ce{^1H}$-$\mathrm{NMR}$). Nevertheless, it has counted for the last degree of unsaturation. Furthermore, that also counted for one oxygen atom and a carbon atom of the molecule as well. Now, we need count for only $\ce{C3H6O}$.

Now, let's analyze $\ce{^1H}$-$\mathrm{NMR}$ spectrum. There is a 2-proton singlet at around $\pu{3.6 ppm}$ for isolated methylene group (without a neighboring hydrogen), indicating it is most probably next to a oxygen atom in the molecule or in between one of phenyl group and the carbonyl group, based of its deshielding nature. Also, there are two 2-proton triplets present in the $\ce{^1H}$-$\mathrm{NMR}$: One is present at around $\pu{2.9 ppm}$ and the other at around $\pu{4.3 ppm}$, suggesting the presence of isolated (no other protons at vicinity) -$\ce{CH2CH2}$- group in the molecule. These 3 -$\ce{CH2}$- groups are accounted for the rest of $\ce{C3H6}$ portion of the molecule.

Furthermore, the highly deshielding nature of the resonance at around $\pu{4.3 ppm}$ strongly suggest that corresponding -$\ce{CH2}$- group is next to the final oxygen atom to be counted. Also, the other -$\ce{CH2}$- group corresponds to the resonance at around $\pu{2.9 ppm}$, which is only moderately deshielded, clearly suggests that it is neighboring the second phenyl group.

Based on these assignments, one can deduce the structure as 2-diphenylethyl 2-phenylacetate as depicted in the diagram below (inserted blue box) with suggested $\ce{^1H}$-$\mathrm{NMR}$ spectrum by ChemDraw, which gives a close resemblance to the actual one:

I will ignore the IR as I always do and work only with the NMR.

35
Splitting of multiplets in ¹H NMR spectra?
5
How do I find out what benzene containing compound this is with IR and NMR?
3
NMR spectrum of cyclohexanol - hints on integration
4
Coupling constant in 1H NMR with phosphorus
1
Why does NMR deal with protons?
4
Why do we observe signal coalescence during dynamic NMR?
10
Symmetry and NMR linewidths of quadrupolar nuclei
6
Slight variation in NMR integrals of CH protons vs. CH2 or CH3
7
Identify the structure of the compound (C3H5NO) given its NMR chemical shifts