Why do we consider that double bonded $O$ establishes that $\delta^{+}$ on our $C$ (and creates an electron withdrawing inductive effect $-I$) and not the single bonded $O$? Is this because of the $\pi$ double bond? Can you tell me why? 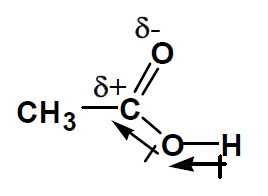 Figure 1: Inductive effect created by the electron deficiency of $C$. As we can see the $H$ is now less attached to our molecule

Now supose we have the following carboxylic acids:

For me it makes sense that $FCH_{2}COOH$ is more acidic than $CH_{3}COOH$, because $F$ is an electronegative element and he creates a partial negative charge moving de electron density to him, leaving our $H$ in the carboxyl group less attached and easier to remove.

Why do we consider that double bonded O establishes that δ+ on our C (and creates an electron withdrawing inductive effect −I) and not the single bonded O? 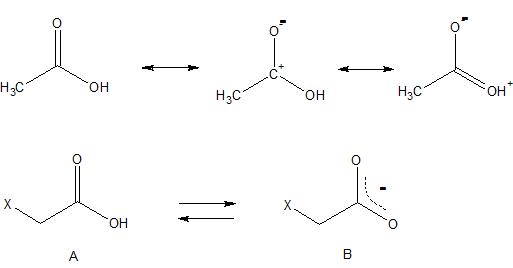 To answer the question about the relative $\ce{pK_{a}s}$ of these acetic acid derivatives let's proceed as follows. First, let's consider resonance effects of the substituent ($\ce{X}$) to be negligible. This is because 1) the substituent is not directly attached to the carbonyl group or the resulting carboxylate anion, 2) it turns out there is a node at $\ce{C2}$ in the carboxylate anion (zeroth order approximation), so the $\ce{X}$ group is disconnected in a resonance sense. So we need only consider the inductive effect of $\ce{X}$ upon both the reactant and the product and this should allow us to estimate how the equilibrium involving acid ionization will shift. $\ce{X=H}$ is our baseline and we will compare the other two compounds against it. When $\ce{X=F}$ the starting acid ($\ce{A}$) will be inductively destabilized due to the electron withdrawing inductive effect of fluorine. On the other hand, the inductive effect of fluorine will serve to stabilize the resultant carboxylate anion ($\ce{B}$). These two effects (destabilization of the reactant and stabilization of the product) will act in concert to push our equilibrium to the right, making fluoroacetic acid a stronger acid than acetic acid. In the case of $\ce{X=CO2^-}$, the inductive electron donating effect of the $\ce{-CH2CO2^-}$ group should be stronger than the $\ce{CH2-H}$ group in acetic acid, so our reactant should be more stabilized. On the other hand, the inductively electron donating $\ce{-CH2CO2^-}$ should destabilize the already electron rich carboxylate anion ($\ce{B}$). Here both inductive effects again work in concert, but now to stabilize the reactant and destabilize the product making this derivative less acidic than acetic acid. In addition to this inductive effect there is also an electrostatic effect. When $\ce{X=CO2^-}$, we will have two negative charges in $\ce{B}$. This electrostatic effect further destabilizes $\ce{B}$. The combination of inductive and electrostatic effects in this last case will make this acid much less acidic than acetic acid.

The last pka is for the negative ion? Isn't it obvious, that in that case leaving hydrogen cation has to overcome attraction from two negative charges instead of one and have troubles with it?

Also did you mean to write negatively charged diatomic oxygen? I think you meant to write $\ce{O^{2-}}$.

0
Carboxylic acid strength due to the inductive effect
0
How does the position of an electron donating group affect acidity in benzoic acid?