So I got myself a large Erlenmeyer flask, some steel wool and the bleach from the bathroom, mixing them under safe conditions in small quantities to see the sparky reaction I'd heard about. Trouble is, I didn't know the bleach we had was non-chlorine!

EDIT: My silly mind assumed that no reaction meant I had non-chlorine bleach, but staring me in the face is hypoCHLORITE. My apologies, I'd not meant to mislead. The brand was Shaw's at the time, or "Signature Selections" which is their store brand. I got no sparks and no visible fumes nor immediate discoloration.

Disappointed, I left the mixture alone and uhm.. forgot about it.

Going back to check on it, I found the steel wool dissolved into a powder at the bottom, and the rest of the fluid was purple.

Curious, I used a giant coffee filter and strained the rusty cake-mix residue out of the rest of it, which was now a lighter purple.

I didn't know what I'd made and thought it best to simply leave it be for a while again. I kept it in the basement, visible when the door was open and kept an eye on it. Slowly the purple went away and the fluid decreased leaving a white powder and bits of clear-quartz like appearing crystals. After several months the crystals were larger, and the white powder has climbed the entire container and spread down the sides. It's now been about 18 months since the initial experiment, and the white powder (which is similar to efflorescence in appearance) has climbed about halfway down the outside of the container, and the inside crystals have grown slightly.

What in the world have I made?

After the edits by the original post, the OP clarified that they used a hypochlorite (not an oxygen bleach as stated earlier) and left a piece of steel wool in it. Due to corrosive nature of chloride/hypochlorite, the steel wool crumbled to iron (III) oxides. When you gently heat rust in highly alkaline medium in the presence of hypochlorite ion, it forms a purplish sodium ferrate. This has iron in the (+6) oxidation state. Over time the purple color disappeared because ferrate slowly decomposes back to lower iron oxidation states in water solution, releasing its excess oxygen. Ferrates are more stable in alkaline solution than in neutral or acidic ones, so absorption of carbon dioxide over time, making the solution less alkaline, could have promoted this decomposition.

This decomposition of ferrates by acids, carbonic acids, and acidic salts was known as early as 1890s as noted in a review by Moser in Journal für Praktische Chemie 1897, 56, 425 (see relevant comments). Ferrates were known in 1700s.

Also note that hydrogen peroxide and ferrate decompose each other immediately, just like permanganate ion in aqueous solution.

The quartz like crystals are nothing but sodium chloride with perhaps some sodium carbonate. 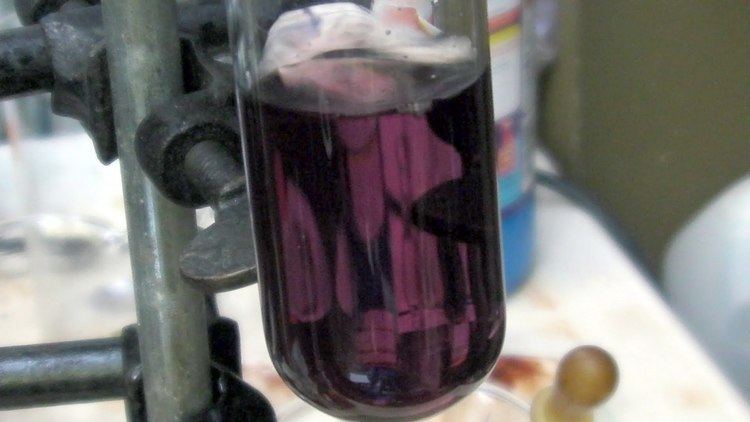 Not the answer you're looking for? Browse other questions tagged home-experiment crystal-structure or ask your own question.

5
In the lattice model, what's a nearest neighbor?
11
If salt crystals make a cube shape, what is this 'X' marking?
1
Why does steel wool catch fire when rubbed with a battery?
3
Are adamantane crystals covalently bonded?
3
Why did my iron nails not dissolve in hydrochloric acid?
8
Sodium permanganate from manganese dioxide and sodium hypochlorite
5
What are those... crystals?
2
Thickening and/or slowing evaporation of IPA-based ink
1
How can I dissolve a precipitate when stuck to the side of a boiling flask