Nitration of tri-substituted benzene with Acetic acid and HNO3 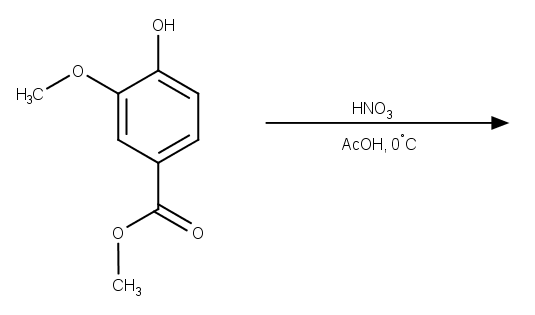 So I looked it up on the internet and it says that this is to be a nitration reaction. But how is the $\ce{NO2+}$ formed? I simply cant seem to be able to do the first step of the mechanism, that is the generation of the electrophile.

I thought that as $\ce{HNO3}$ would be the stronger acid, it would lose $\ce{H+}$ that would get added to the acetic acid and it would lose water to form a the electrophile that gets added to the ring. But apparently this is not the case. Why? Could someone show the mechanism?

Your reaction goes way back to 1930s when Ingold and coworkers have done pioneering work on nitration of aromatic compounds using nitric acid in organic solvents in place of sulfuric acid (vide infra). Let's see how this has been developed:

Historical perspectives: The earliest recorded experiments on the kinetics of aromatic nitration has been performed in 1884, when the nitration of benzene and some of its simpler derivatives with various amounts of nitric acid have been examined at various temperatures (Ref.1). No solvent has been used (just nitric acid), and thus, the reaction mixtures were heterogeneous. The first nitration of aromatic substances with nitric acid in sulfuric acid was obtained in 1904, when the velocity constants in the nitration was studied (Ref.1). In their punlication in 1938, Ingold and coworkers have reported the kinetics of nitration using nitric acid in organic solvents (other than sulfuric acid), specifically nitromethane as the solvent (Ref.1). In this studies with nitromethane as the solvent and nitric acid in constant excess, they demonstrated zeroth order kinetics for the nitration of benzene and activated aromatic nucleous such as toluene. They have observed that, when less reactive compounds such as chlorobenzene were used, there were some dependence of the rate on the compound. Hence, they have continued these experiments with considerably less reactive compounds such as 1,4-dichlorobenzene and ethyl benzoate to show that less reactive compounds have established first-order kinetics on nitration.

Originally, Benford and Ingold thought that their results were peculiar to nitromethane, yet they have observed ail the same phenomena with acetic acid as solvent (your case!). Based on these data, Ingold and coworkers proposed the formation of nitronium ion ($\ce{NO2+}$), which may be the rate-determining if it is sufficiently rapidly removed by the aromatic compound used as the substrate. They proposed the actual mechanism of the formation of nitronium ion as follows (Ref.2):

This mechanism is well established now. Based on these fact, I hope I answered your question. In their further work, Ingold and coworkers have proposed the mechanism for nitration of aromatics based on the nitronium ion formation (Ref.3). In that publication, they proposed existence of nitronium ion through rapid equilibrium with concentrated nitric acid, and that mechanism is believed to be the case to date.

5
Coconut aldehyde mechanism
3
Is this the correct mechanism of the formation of the nitronium (NO2+) ion from sodium nitrate and sulfuric acid?
7
Preparation of picric acid
10
Why does a mixture of nitrous acid with concentrated nitric acid cause nitration of benzene instead of nitrosation?
6
Nitrosonium ion in the nitration of phenols
0
Reaction of urea and thiourea with nitrous acid