I tried drawing out (R)-1,1,2-trimethylcyclohexane but I can't seem to figure it out. I think I"m getting hung on assigning priorities.

I've labeled the chiral carbon with an asterisk. I've also drawn out all the groups it is attached to. I gave the hydrogen the lowest priority (4) and I'm giving the methyl carbon a priority of 3. I am giving the other carbons priorities of 1 and 2 (as can be seen in the picture). However, this doesn't seem to make any sense; I get a molecule that I can neither assign S nor R to since the numbers are out of order. 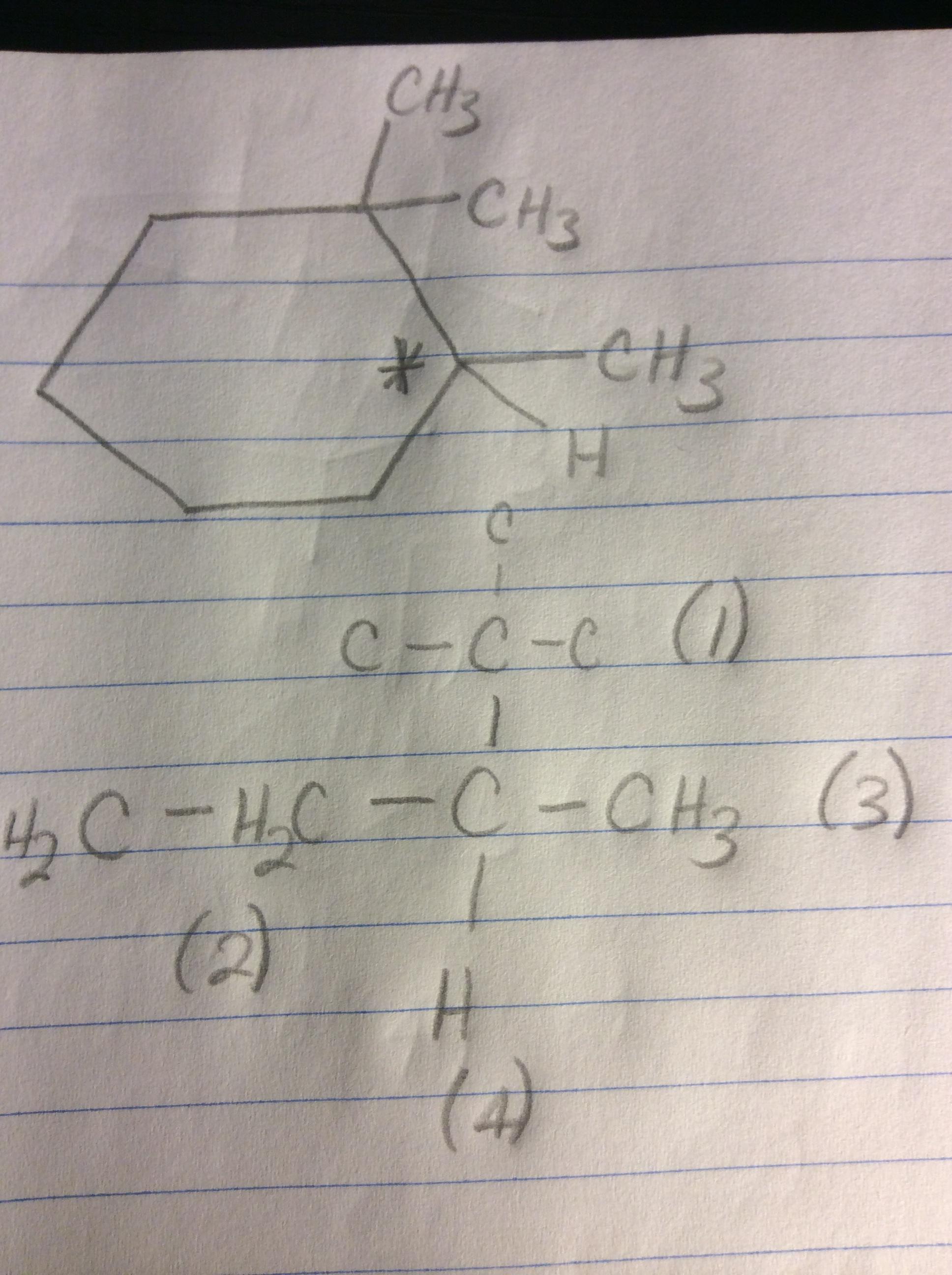 Also is this really an image of (R)-1,1,2-trimethylcyclohexane? 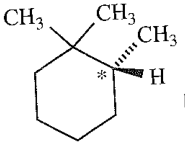 You've correctly identified the chiral center in your molecule (the carbon with the asterisk), that is the first step. When doing work with chiral centers, it is very important to use solid lines to denote bonds in the plane of the screen, bold wedges to denote bonds coming from the plane of the screen towards the viewer and dashed wedges to denote bonds from the plane of the screen away from the viewer. Drawing all 4 bonds as simple solid lines, as you did, will often lead to confusion. Look at the figures below, both enantiomers of 1,1,2-trimethylcyclohexane are shown. The next step in assigning R/S configuration is to rank the 4 groups around the chiral carbon by molecular weight, with "1" being assigned to the highest molecular weight group, and "4" to the lowest (you also did this correctly). Now, grab the "4" group in your hand so that groups "1" through "3" form a circular pattern between your eye and your hand. If moving from 1->2->3 involves clockwise movement, then this is the "R" configuration. If the movement is counterclockwise, then it is the "S" compound you are observing.

Take a look at this link for a nice picture of what I'm describing.

You cannot determine the R/S configuration of the chiral carbon in the compound you've drawn on paper at the top of your post because it is unclear which group 3 or 4 is projecting towards the viewer and which is projecting away from the viewer. Finally, note that my "R" drawing matches the "R" drawing at the bottom of your post.

Not the answer you're looking for? Browse other questions tagged organic-chemistry nomenclature chirality or ask your own question.

1
R, S Configuration and Branching - Which Path?
2
Assigning Carbon NMR
4
Determining absolute configuration when the lowest priority group is not facing backwards
5
Determination of (R) and (S) configurations from a Haworth projection
13
Are carbocations necessarily sp2 hybridized and trigonal planar?
2
How to assign priorities around the asymmetric carbon with its substituents having multiple bonds?
3
Assigning the 13C NMR spectrum of bromobenzene and 4-bromobenzophenone
8
Assigning R/S configuration