Ask Question
Asked 10 months ago
Active 10 months ago
Viewed 91 times
0
$\begingroup$
Closed. This question is off-topic. It is not currently accepting answers.

Q15 Each metallic ion was separated from an aqueous solution containing $\ce{Ba^2+},$ $\ce{Cu^2+},$ and $\ce{Zn^2+}$ by the procedure shown in the following figure. From ①–⑥ in the table below choose the correct combination of ions that predominates in the precipitates a, b and the filtrate c. 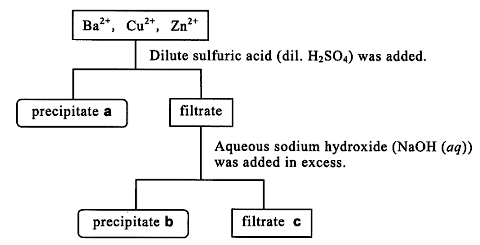 For the precipitate a, I know the answer is $\ce{Ba^2+}$ ion because it has a highly negative standard reduction potential than the other ions, so it tends to displace the sulfuric acid to form insoluble barium sulfate.

Once $\ce{Ba^2+}$ is eliminated as poorly soluble barium(II) sulfate, there is a solution of soluble copper(II) and zinc(II) sulfates. Considering this has been done by careful/gradual addition of sulfuric acid, and the fact that both remaining sulfates undergo hydrolysis, the solution is going to be slightly acidic — this is one reason for sodium hydroxide "added in excess".

Another reason, as both Ivan and Waylander pointed out in the comments, is the difference between reactivity of copper(II) and zinc(II) in alkali medium. Long story short, you are probably supposed to know the specific properties of the common transition metals cations as the reduction potential isn't really helpful here.

Copper(II) with $\ce{NaOH}$ first forms colloidal copper(II) hydroxide; the gel is then solidifies to light-blue amorphous substance upon subsequent addition of hydroxide:

$\ce{Cu(OH)2(s)}$ appears to be precipitate b. Sodium tetrahydroxocuprate(II) $\ce{Na2[Cu(OH)4]}$ doesn't form here: it's a very moisture-sensitive and in the air quickly turns dark-brown:

Zinc(II), on the other hand, with $\ce{NaOH}$ first forms white precipitate of zinc(II) hydroxide:

Note: chemical reactions are adapted from [1].

Not the answer you're looking for? Browse other questions tagged aqueous-solution solubility transition-metals reduction-potential or ask your own question.

8
Why do carbonates, oxides, and pure metals precipitate before metal sulfides?
4
Electrolysis of aqueous copper (II) nitrate
4
Why is zinc deposited on copper when boiling an aqueous zinc sulfate solution?
12
Differentiation between zinc, aluminium, and magnesium ions in solution
6
How are solubilities of hydrate salts determined when competing equilibria are unavoidable?
1
How can I make a fairly saturated copper (II) sulfate solution by heating?
3
Precipitating silver(I) salts from the solution of barium(II) cyanate and iodide
0
Double Replacement Reaction in which everything cancels out