Varying sizes in LUMO of acrolein

I want to ask a question about the varying sizes in the LUMO of acrolein during a 1,2- or 1,4-addition.

Today in our introductory lesson to Organic Synthesis with 1,2- and 1,4-addition we were listening to the reason why some nucleophiles may attack one functional group compared to another.

The following picture was discussed: 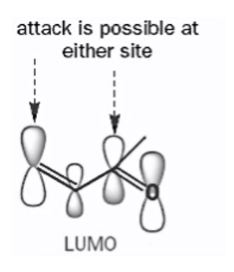 However, when finding an explanation for these varying sizes in orbitals, I couldn't find anything to explain this.

This question was the closest which explained the effects of varying orbital sizes but did not differentiate between $\ce{C1}$ of the alkene and $\ce{C3}$ of the carbonyl.

Why are there two different orbital sizes?

Browse other questions tagged molecular-orbital-theory c-c-addition or ask your own question.

4
HOMO/LUMO and charge distribution
1
What's the difference between HOMO-LUMO and valence-conduction bands?
3
Conjugate addition vs Electrophilic addition
4
When is donation into an anti-bonding MO stabilising?
3
Molecular orbital explanation of why the protonation of the oxygen atom makes a carbonyl group more electrophilic