Can aniline be made with the method described in Dr Stone?

In Dr Stone, the main character makes aniline by rinsing coal tar with HCl, then mixing in ethyl acetate. See the image below. Is a method like this possible? What is occurring here? 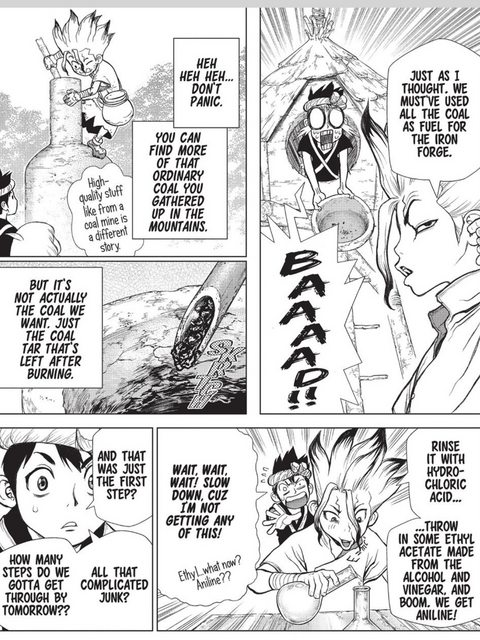 Believe it or not, aniline was actually isolated from coal tar way back in 1834. A chemist called Friedlieb Runge isolated aniline along with phenol from coal tar. He discovered that aniline produced a beautiful blue color when treated with chloride of lime (calcium hypochlorite). He named it cyanol/kyanol and that was the birth of the first aniline dye but it was made a dye by the exhaustive work of another chemist, William Perkin.

Perkin distilled the components of coal tar like benzene, aniline, toluene, anthracene, phenol, naphthalene and other aromatic hydrocarbons. He first worked around toluene to make allyl toluidine which he then transform to quinine by oxidizing it with a mixture potassium dichromate and sulfuric acid. He was left with a useless reddish-black powder. He then took aniline and repeated the experiment. He was left with a black gooey substance. Disappointed by the results, he took the test tube and washed it off but then came out a beautiful looking purple residue which hung off at the wiping cloth. He named the dye "mauveine". Perkin was so amazed by the result that he started working with other distilled products hoping to make other dyes$\ce{^{[4]}}$ . His discovery revolutionized the dye industry. Perkin proposed the following statement:

Benzene, toluene, and other components of coal tar were colorless because they absorbed ultraviolet light undetectable by the human eye. But if those aromatic hydrocarbons were treated with an acid to create aniline or another amine, after some additional steps the newly synthesized molecules very efficiently absorbed light particles from specific wavelengths in the visible spectrum.

So, Senku (the main character of Dr. Stone) being well-versed in chemistry knows what he's talking about.

Not the answer you're looking for? Browse other questions tagged organic-chemistry aromatic-compounds amines extraction chemistry-in-fiction or ask your own question.

2
Mixing solvents and other compounds - safety issues
5
Skipping the defatting stage in extraction of alkaloids
3
Natural Product class
7
I (might) have accidentally combined these mold-killers at home: Any adverse reactions?
1
Intermolecular interaction between aniline and dichloromethane
0
questions about the synthesis of iodobenzene from aniline