What is the structure of RCH=NH? [closed]

What is it's structure?

Here it is one of the isomers.

The general structure of an imine contains a carbon-nitrogen double bound. 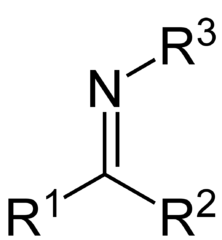 The structure of your formula is: 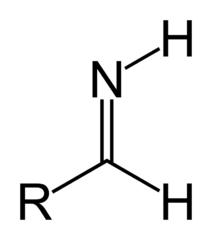 The structure of an imine is analogous to that of an olefin. There is a central $\ce{C-N}$ sigma bond along with a pi bond just as in an olefin. In the figure below, the olefin has four substituents attached to the two carbons forming the carbon-carbon double bond.

All 6 of these atoms or groups lie in the same plane, the plane of the screen. Similarly in an imine, all of the groups attached to the central $\ce{C=N}$ double bond also lie in the plane of the screen, along with the carbon and nitrogen atoms themselves. Note that while the olefin had four substituents ($\ce{R_1 - R_4}$), the imine has only 3 substituents. The fourth substituent position in the imine is occupied by a lone pair of electrons on the imine nitrogen. This gives rise to an important difference between olefins and imines. Appropriately substituted olefins can exist as cis-trans pairs. It typically takes energies in excess of 60 kcal/mol to break the pi bond portion of a carbon-carbon double bond and cause cis-trans isomerization. The barrier for interconversion (called syn-anti isomerization in imines) in an imine is much lower, on the order of 20 kcal/mol, so rotation about the imine double bond occurs much more readily than in the olefin case.