How to counter crust formation when crystallizing NaCl on the liquid-air interface?

Saturated sodium chloride solutions are evaporated at elevated temperature. The aim of evaporation is to produce hollow pyramid salt crystals. Temperatures used range from 65°C to 85°C. With 80°C obtaining the best results yet. I was able to save a couple of large pyramid crystals before they were taken up in a crust.

All evaporation experiments do seem to produce some hollow pyramid crystals. However, most of the very small pyramid crystals encounter other very small crystals, clumping together. This happens faster than the growth of individual crystals. Resulting in a crust that covers the liquid-air interface, leaving no room for proper pyramid formation.

The salt is dissolved in both water and a mixture of ethanol and water in different ratios. Pure water solutions with NaCl gave the best results yet. But still, the crust formation is a large problem.

So, here comes the real question: Is there a method to counter crust formation, so that individual crystals can grow larger? Or am I looking for an answer in the wrong way, should I perhaps search for another crystallization method to produce NaCl pyramids? 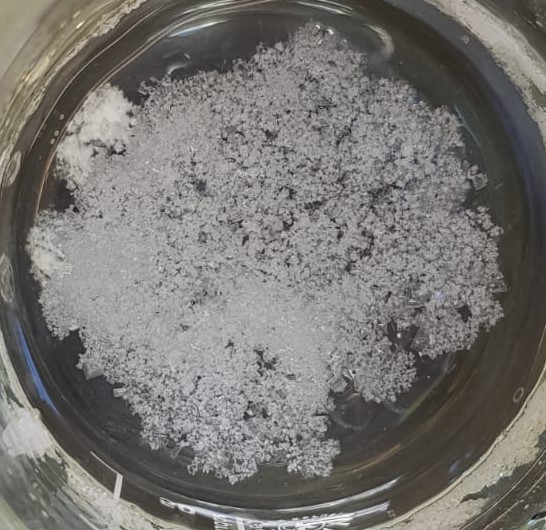 Thank you for reading this. I hope to find some valuable solutions to this problem.

Larger and shallower dishes can be used and are experimented with. The general trend I observe is that a layer of approximately 1 cm gives best results. A deeper filled dish gives too much crystallization at the same time on the interface. While a lower filled evaporation dish does not allow pyramid formation since the formation of hollow pyramids depends on slow sinkage of the crystals. The point is faced down, while the sides are grown on the liquid-air interface. So you could say, while crystallizing it is a reversed hollow pyramid.

A high evaporation rate is needed to create the pyramids, slower evaporation often leads to cubic salt crystals. It can also lead to pyramid-like crystals with a cuboid top, which is not desired.

Aditional comments on similarity with How to make pyramid-shaped NaCl salt crystals:

The problem is similar to the aforementioned topic, I read the topic before I opened this one. I try to build on the previous topic and further explore the knowledge on this very specific mechanism.

No solution was found in the previous topic. A valuable suggestion was made by @andselisk, using a water-ethanol mix for pyramidal crystals. However, the source mentioned for this statement does not seem to mention that. A similar statement is found on the Crystal-growing-pedia: https://en.crystalls.info/Sodium_chloride#Influence_of_impurities Details are lacking in these descriptions. I have not yet been able to produce pyramidal crystals using a water-ethanol solution.

Browse other questions tagged experimental-chemistry crystal-structure crystallography recrystallization or ask your own question.

10
How to make pyramid-shaped NaCl salt crystals
0
How to control nucleation of NaCl crystals?

22
How does NaCl maintain its crystalline structure?
4
How to rationalise the coordination number of CsCl versus NaCl?
13
Where's my experimental error coming from?
1
Would a melted crystal recrystallize back into the same lattice structure when frozen?
1
How the crystal structure varying for the same compound?
10
How to make pyramid-shaped NaCl salt crystals