I got a question in my textbook asking for the mass of oxygen present in 10.6 grams of $\ce{Na2CO3}$.

Why are they asking about the mass of oxygen? Does this refer to $\ce{O2}$? Shouldn't it be the mass of ozone, $\ce{O3}$, present in 10.6 grams of $\ce{Na2CO3}$, since the formula of sodium carbonate contains three atoms of oxygen in its formula unit?

Would it make a difference if the question read "calculate the mass of ozone present in 10.6 grams of $\ce{Na2CO3}$"?

The question in the book is about elemental composition of the given substance, in terms of mass.

You are given the empirical formula, i.e. what could be obtained by elemental analysis, namely what elements composed the substance and in which relative ratio. This does not tell you about the spatial arrangement of the various elements and the way they bound each other. The empirical formula can be even "smaller" than the actual chemical entity, all that is important is that for a given amount all elements will be always present in that ratio.

The fact that you read O3, it does not mean that you have ozone inside a molecule or salt, and the three oxygens might be at different sites within the structure (by the way, ozone is a polar molecule itself not an element or elemental ion, why it should be found combined? ).

While this should answer your current question, I invite you to reconsider the previous chapters of the same book, which almost certainly explains what we call elements and why, the laws of chemical combination, and the different levels of chemical formulas.

Now let's move to the reason for why I've choose to answer instead commenting "there is not ozone" or simply ignore your post.

Once the above is clear, consider that in cases the content of a substance (not its empirical formula) can be given in terms of a formal equivalent of another one. This is pretty common discussing or even classifying substances for a specific purpose or effect, so it might be with drugs, fertilisers, etc. In your case, it could have been the amount of ozone evolving from the sample if a process would convert in ozone all the oxygen contained in it. Note that the amount as mass won't change as a certain amount of oxygen remains the same in all allotropes :) which again makes your doubt quite unmotivated.

Realistic examples of this formal way to express the chemical content by formal equivalents are fertilisers. Their N-P-K numbers refer to elemental nitrogen, phosphoric anhydride and potassium oxide, respectively. The latters are not the actual content of the fertiliser (as it wouldn't be ozone in your unfortunate example, too) but refer to the way as P and K were finally weighted in elemental analysis.

To add to Alchimista's answer, suppose the question were about a sample containing 1 mole of ozone (and nothing else). You could ask two questions:

This question makes no sense because there is no ozone in sodium carbonate. However, you could specify a reaction (a fictional one):

This wisdom from our resident artiste of one-liners is a great analogy illustrating the misconception. If we go back to the specific question, we can see from the Lewis structures that there is no ozone in carbonate: 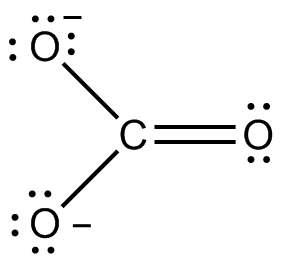 Ozone has oxygen-oxygen bonds, which are lacking in carbonate. Carbonate does contain oxygen atoms bound to carbon, so asking about the oxygen content makes sense. Asking about the $\ce{O2}$ content or the $\ce{O3}$ content (or -ahem- the $\ce{O8}$ content) without giving a specific chemical reaction (that would specify the stoichiometry) makes no sense, on the other hand.

0
How to calculate the number of waters of hydration?
1
Calculate the number of moles of phosphorus in 15.95g of tetraphosphorus decaoxide
1
Converting from Grams to Molecules
2
About combining a cation and an anion
1
Describing the preparation of solutions and determining how many grams are needed to react with a substance
0
Empirical formula of Glauber's salt
8
Calculating the theoretical Density of a Lithium oxide
0
Stoichiometry question
0
Determination of molecular formula of hydrocarbons by combustion analysis
0
How can I calculate the equilibrium constant for this reaction?