Can anyone tell me whether or not air or N$_2$ dissolves easily in the R-113 (liquid solvent) under the saturation pressure of R-113? If yes, what is the solubility roughly? From this link one can only find its solubility in water. It will be better if you could provide a link. Thank you in advance!

While data for air solubility in R-113 is difficult to find, Henry's law constants $k_\text{H}$ are available for $\ce{N2}$ in a series of related refrigerants (Ref. 1) comprised of variously halogenated ethanes. However, these are predicted, not experimental, Henry's law constants: the vapor-liquid equilibrium of binary mixtures containing nitrogen was modeled with an equation-of-state based on a perturbed–Chain (PC) modification of the Statistical Associating Fluid Theory (SAFT). I back-calculated the $k_\text{H}$ from the published temperature coefficients. Assuming a $\ce{N2}$ partial pressure $\pu{p_{\ce{N2}}= 0.78 atm}$ then leads to the following $\ce{N2}$ solubilities (as mole fractions) in the refrigerants in the temperature range $\pu{170-280 K}$: 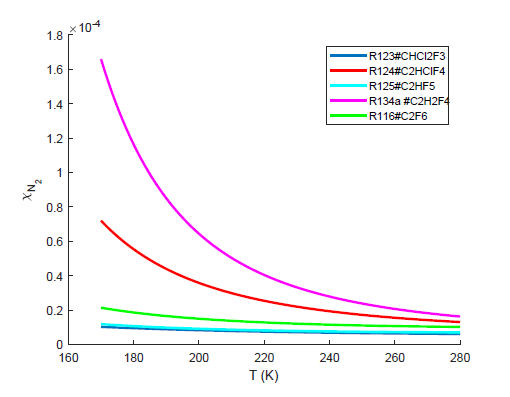 Note of course the analysis here is restricted to nitrogen, but you can proceed in the same way to analyze other gases for which $k_\text{H}$ are reported.

Not the answer you're looking for? Browse other questions tagged solubility or ask your own question.