What can we say about the dipole moment of terephthalic acid?

According to Wikipedia, the dipole moment of terephthalic acid is zero. But few sources have a different opinion.

Can we say that terephthalic acid can also exist in these two conformations, leading to a high dipole moment? 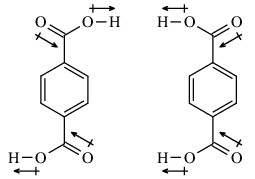 You are indeed correct, a study by Karthikeyan et. al.[1] suggests that the Dipole moment of terephthalic acid is indeed around ~2.6D (in air), the same as your latter source.

The calculated dipole moment of the title compound is 2.57 Debye in gas and 3.14 in solvent

This is expected since terephthalic acid has only two stable rotamers with practically equal energies, both of which are planar.[2] 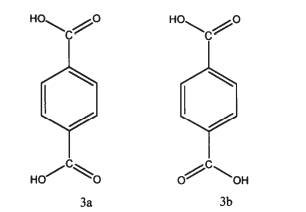 Now even though the paper does not mention this clearly anywhere, what this suggests to me is 2.5704 D is the average Dipole moment of the 3a rotamer (varying from 2.4078 to 2.733 due to COOH twisting vibrations? unclear from the paper), since the Dipole moment of 3b should definitely be zero.

Since both the rotamers exist in nearly equal concentrations, This could suggest that the average dipole moment of should be written as ~2.6/2 D? It's unclear.

Not the answer you're looking for? Browse other questions tagged aromatic-compounds carbonyl-compounds physical-organic-chemistry or ask your own question.

2
Why does the dipole moment of molecules go from positive to negative?