Why does the dipole moment of molecules go from positive to negative? [duplicate]

In physics the dipole moment is said to go from the negative to the positive pole, check for instance https://en.wikipedia.org/wiki/Electric_dipole_moment (Elementary definition).

This makes sense to me since in an electric field (which is directed from positive to negative) the dipole moment aligns with the electric field, such that in the aforementioned definition the positive pole points towards the negative pole of the electric field and vice versa. (also see: https://physics.stackexchange.com/questions/89157/motion-of-a-dipole-in-an-electric-field)

Now, in all representations of molecular dipole moments I could find online the dipole moment is directed from the positive to the negative pole.

or just have a look at google images for the search term 'dipole moment molecule'.

You have assessed the problem correctly. Physicists and chemists use just the opposite directions. Keep in mind that both are arbitrary choices, however the physicist's convention is consistent with electrostatics. All you have to do is to be aware of this direction in the chemistry literature. I have rarely seen any student ever thinking about it which is rather sad.

"Most chemists draw the direction of an electric dipole backwards. This inconsistency in sign convention is more than a trivial oversight or matter of convenience. We are introducing an incorrect convention that is central to our student’s understanding of fundamental thermodynamics; which way is up? As a student matures from general chemistry to organic through analytical, physical, inorganic, and biochemistry they are reintroduced to similar, powerful concepts that hold our discipline together. However, this reconnection of chemical principles comes with each subdiscipline’s own idiosyncrasies and a highly contextual framework. Reexamination of a central concept from the perspective of a new subdiscipline should not introduce misconceptions about that concept. When misconceptions introduced through chemical language can be avoided, we should change the way we speak."

Provided you remember the convention you are using it shouldn't matter. You could argue that either way "makes sense". If you draw it the way that you suggest is logical, then you are right, the low energy configuration will see the dipole moment vector aligned along external (applied) electric field lines, pointing from negative to positive charge. In addition, if you need to draw the electric field lines generated by the dipole moment and assume it is a point dipole then the electric field lines seem to stream through the dipole vector (look again at the animated figure in the wikipedia page). This is illustrated by the following frame from the wikipedia animation: 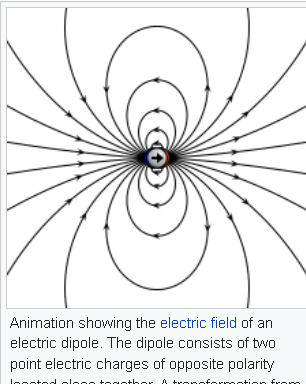 The lines loop around the vector from the positive end to the negative end. This is a physically appealing picture and consistent with the effect of an electric dipole aligned in an external field in a low-energy configuration, which is that its own field opposes the external one.

But if you don't consider the molecule to be a point dipole (which it most decidedly isn't) then the internal field lines between positive and negative charges inside the molecule "look all wrong" (they will oppose the direction of the moment vector if drawn to point from negative to positive charges in the molecule). Again, this is illustrated by one of the frames from the wikipedia animation: 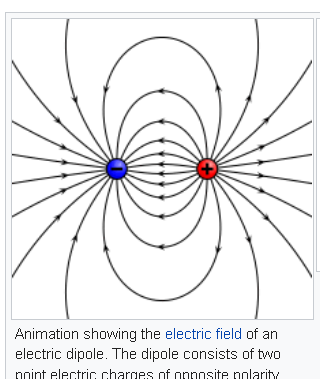 On the other hand, if you draw the moment vector "according to a chemist", then the internal field lines do stream along in the same direction as the vector, which might be helpful to visualize the relative charge distribution inside the molecule. It is also easier (imho) to think of a vector pointing from more positive to more negative values. So perhaps it is that chemists, in drawing the dipole moment, consider individual charges in the molecule, and look for a shorthand to understand this internal distribution, whereas physicists consider an abstract mathematical point dipole. Mathematically however it is a potentially serious source of confusion and mistakes to draw it the "chemists way". It does leave you wondering what they were thinking.

In answers to the linked question of which yours is a duplicate you will see the argument that the direction of the dipole vector "follows naturally" from the mathematical definition of the moment, but I don't find the argument convincing. For instance, you may write for a dipole generated by two equal but opposite charges

which suggests the dipole points from the negative to the positive charge, but you could just as well write

which suggests the opposite. So what's right?

I haven't read the article cited by @M.Farooq but it probably presents a conclusive perspective on the matter.

Note a recent example of chemists doing things "the right way": What can we say about the dipole moment of terephthalic acid?

Not the answer you're looking for? Browse other questions tagged physical-chemistry spectroscopy ir-spectroscopy physical-organic-chemistry or ask your own question.

27
Confusion about direction of dipole arrow in alpha-helices and other molecules
9
What can we say about the dipole moment of terephthalic acid?