I was just introduced to the concept of orbital hybridization. I believe I understand the idea behind it, but there is some accompanying terminology that prevents me from achieving a greater understanding.

In the following image:

I see that one of the electrons in the $2s$ orbital of carbon is promoted to one of the $2p$ orbitals. I start to get confused when hybridization occurs, simply because there are four $\ce{sp^3}$ hybrid orbitals, as also shown in this diagram: 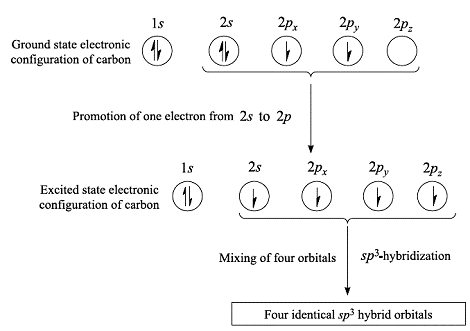 Could someone please offer a simple explanation that would help clear this up? Why is each individual hybrid orbital called an $\ce{sp^3}$ orbital? It seems like all four orbitals together should be called $\ce{sp^3}$, because they all make up the combination defined by $\ce{sp^3}$ ($\ce{s + p + p + p}$).

Not the answer you're looking for? Browse other questions tagged hybridization valence-bond-theory or ask your own question.