I understand most of the theory behind TLC and that different volatile solvents have different polarities and cause the 'spotted' substances to move at different rates, but what is the point of creating mixtures and then using them in different ratios? How could the results change if I changed the ratios?

Glycine didn't move, and the other two spots did move up. How would the results have changed if I used only dichloromethane? only hexane?

What if I used a 7:3 ratio? 5:5 (1:1) ratio? I have a feeling the answer is really obvious and i'm overthinking this but it's really not hitting me right now. Thank you for reading!

Chromatography is really an empirical science. The fluid mechanical side and the adsorption phenomenon is somewhat well understood but choosing mobile phases is essentially based on trials, sadly to date. If someone has given you a ratio, say 8:2, it means someone must have tried it and they found that this mobile phase works the best. The main criterion for choosing the mobile phase is that all the mixture components must be soluble in it. Thus if glycine did not move, this means that the mobile phase has no affinity for this solute (it is perhaps insoluble in it) and it is a poor choice. One then starts to tune the polarity of the solvent mixture. Think about a petroleum sample, which literally has thousands and thousands of different molecules. Now think yourself: will they all dissolve in 100% hexane? You do need an additional solvent.

People are trying to implement machine learning, so that one can enter the molecular structures contained in the mixture, available stationary phases, and with a lot of statistics and tons of experimental data, the computer can tell you to try a certain mobile phase composition.

I can give a very pictorial answer that doesn't require the use of actual pictures nor typesetting and might useful for beginners.

It is all about the misconception, encountered even in chemists with a relative experience in successful experiments, that solubility of the compounds in a mixture is a key factor for their effective chromatographic separation in thin films or columns.

Think of a large number of boats coming down a river just because of the water stream. Each boat has a boater aboard. This ensemble of boat/ers is the eluant.

Think of a number of berths and piers all along the banks. This is the stationary phase, the silica gel on plate in your example.

Now, you decide, or better someone wants you to do so, to go down the river as well. In order to use a boat, first of all the boat must no sink. This is an allegory for you being a molecule soluble in the eluant. If this prerequisite isn't met, you cannot even start your journey.

Say you find a boater that is friendly and the boat carries you, you start descend. However after some time you might find the trip tiring or boring, perhaps the boater is not the best companion you might think of. So you decide to take a break and jump out of the boat at the first next free pier. You might well stay there and relax until another boat with a friendly boater accept you so you restart the trip.

The scenario is repeated until you arrive at the mouth of the river.

Now imagine myself having to do the same. Obviously some of the boaters with not sinking boats must accept me as well. However, we are different persons, and what you find a friendly boater might be unpleasant to me, and viceversa. Similarly, I can be more or less at comfort than you, while sitting on a pier, so I do my best to leave it watching for a friendly boater.

Also, we can be oblige to stay aboard longer between two stops, because the pier can be occupied by one of the descending boats we are using, the boaters stop, too.

Assuming our taste and behaviour is at least a bit different (at the end we are different compounds, so it is) even if we start the descent together we'll arrive at the river's mouth separately at different time.

Note that the reason for this delay is not in the fact that the boat we used weren't sinking, i.e. our solubility, but in the number of boaters we were happy to cruise with and the level of comfort we found on free piers.

In other words, the delay is not due to time that we have spent on the boats - which is identical and depends on the river length and stream velocity - but on the time we stayed stationary at the little harbours all along.

The separation between our arrival times

Changing the eluant composition equal to change the number of friendly boaters and free piers. The trick is to find boaters that are very friendly, say, to you, while minimizing those friendly to me. Still I need some, if I have to arrive as well.

To complete the answer, is it true that similar goes with similar and thus, a compound is likely more soluble in a solvent for which it has affinity. This equals to say that all the boats that don't sink necessarily have a boater which is at least moderately friendly.

As with human beings character and behaviour, it is complicated to find rules in details. If the mixture to be separated consists of very different compounds then the eluant choice is straightforward, otherwise one must start from the basic rules and proceed by feeling and experience.

Mixing different solvents allows to prepare eluants of different polarities in chromatographic sense, as I tried to convey with the above allegory. Other than general polarity (in terms of electric dipole moment), specific shape related issues or the presence of particular functional groups play a role, and this is indeed similar to the situation found when describing solubility, which cannot be reduced to a polar non-polar drastic criterion.

What I want to stress by this already long answer is that even a polar eluent can push unpolar compounds fast down the column (up the plate) by occupying the stationary phase. The unpolar compounds are forced to stay in the mobile phase in spite of their barely minimal solubility. They aren't separated exactly because they stay in solution. Chromatography is not a fractional crystallisation technique and passes huge amount of solvents over the sample, at the end.

In your case using just dichlorometane would have pushed the two faster togheter, using just hexane would have taken months, and for intermediate case you have done one to interpolate about.

The answer given by @M. Farooq may be interpreted as «the optimization of TLC depends on the choice of the eluents used, which till now (by broader advent of machine learning) was empirical».

In my opinion, this should not the impression to retain. Of course the optimization of TLC depends 1) on the eluent / eluent mixture, but should be seen in context of 2) the stationary phase available (e.g., silica, basic / neuter / acidic aluminum oxide, reverse-phase) and 3) the nature of the sample itself (e.g., molecules which may donate protons to / accept protons from the stationary phase / mobile phase, or not) as most common factors, too.

It is true instruction classes and research groups often stick to «typical» mixtures (e.g., petrol ether / ethyl acetate) to perform TLC for analysis and testing, often as preparation for eventual column chromatography on preparative scale, for «typical» samples. Here and there, there are special recipies to address peculiar separation problems, too.

On the other hand, the optimization a TLC already is formalized algorithmically, for example by Glajch et al. 1982 (up to quaternery eluent systems, here), or with the PRISMA method by Nyiredy et al., back in 1985 (here, English abstract). For the later approach, after an initial thought about the separation problem ahead 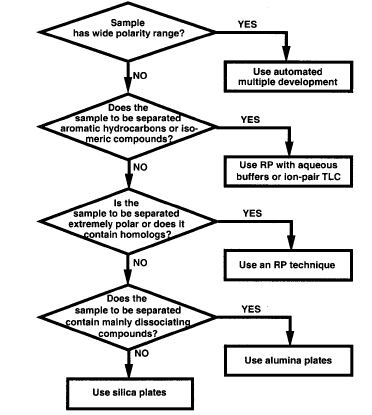 multiple solvents, grouped for their properties, are tested as such (purely) as eluent. The results of this initial screening then are further optimized in mixing solvents as eluents 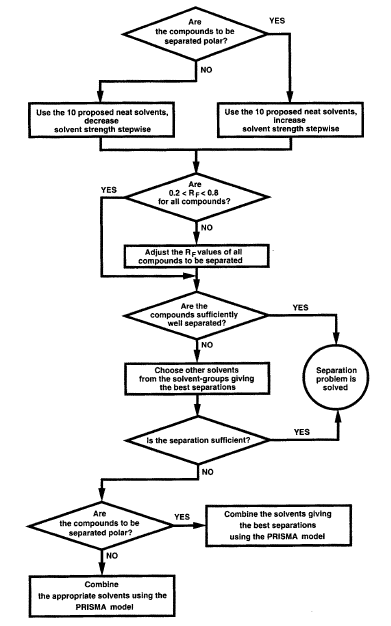 This formalized approach include computations which may be performed independent of a computer. A not-too old review in 2000 (here) explicitly reflects again how to optimize TLC, including the PRISMA method.