1,4-Dichloro-2,5-dimethylbenzene is symmetric about the plane of paper. 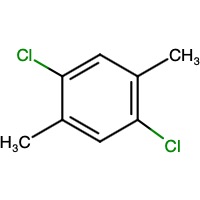 In short: The presence of the $\sigma_h$ plane you see depends on the conformation of the methyl groups.

If your example were either benzene or 1,4-dichlorobenzene, then you were be right, the molecule would contain a plane of symmetry identical to the plane defined by the benzene ring. This $\sigma_h$ plane then could be described as in the following example by the yellow disk: 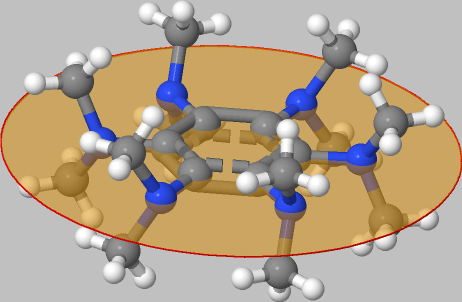 I would suggest to venture out the interactive tutorials around symmetry@otterbein. All you need is an internet browser with javascript enabled. Later, if interested in applying the concepts of symmetry into crystallography (including the transition of Schoenflies notation used in IR-spectroscopy by the Hermann-Maguin about point groups), you may find its sibling crystals@otterbein a valuable complement.

Not the answer you're looking for? Browse other questions tagged symmetry or ask your own question.

7
Does an axis of symmetry determine chiralty?
4
High Degrees of Symmetry in Molecules
5
Where is the mirror plane in 1-bromo-1-chloroethene?
1
Horizontal symmetry plane of cis-dichloroosmiumtetracarbonyl
4
Do we consider the spatial orientation of a molecular orbital while assigning plane of symmetry?
2
How to find a symmetry group of a system if all the symmetry transformations do not obey closure and don't form a group?
1
Do we need to check for all kinds of symmetry in a compound to declare it achiral?
0
A question about rotational symmetry of organic molecules and in particular, the cyclic Isomers of C3H4X2