What are the degrees of freedom that define the temperature of an ionic solid (such as sodium azide)?

Degrees of freedom describe the different ways atoms move in a sample. For a pure ideal gas made of non-linear molecules, there are 3N degrees of freedom (N is the number of atoms in the molecule), 3N-6 of which are vibrational, 3 rotational and 3 translational. So per atom, we have three degrees of freedom. 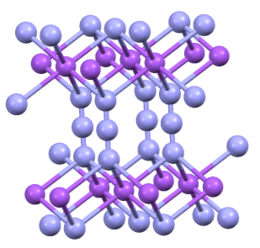 For a solid metal, I know there are three degrees of freedom per atom, and they are related to lattice vibrations (phonons). I also know that black body radiation of solids is used as a "mise en pratique" to define the SI unit Kelvin. That makes me think that solids, no matter whether metallic or ionic, share some feature related to kinetic energy when they are at the same temperature.

Degrees of freedom describe the different ways atoms move in a sample.

The classical equations of motion for a system of N atoms describe the time evolution of 3N positions and 3N momentum coordinates for the atomic nuclei (ignoring electronic degrees of freedom). The total energy is a function of those 6N degrees of freedom. Sometimes some of those coordinates do not provide a significant way of storing energy so they can be ignored. For instance, in a dilute gas, translational momentum provides a means of storing energy, but the potential is essentially flat, so position does not.

Ignoring electronic degrees of freedom (that is, focusing only on nuclear motions), each atom contributes 6N degrees of freedom. Unlike in a dilute gas, here both momentum and position provide a means of storing energy. The amount of energy that can be stored in each degree of freedom is, following classical statistical mechanics (high T limit), equal to kT/2, for a total of 3RT for one mole. However, quantum mechanics limits occupation to certain states rather than a continuum, and this can reduce the amount of energy each degree of freedom can store (the heat capacity).

There are some concepts in your question that need to be disentangled:

1) Equipartition, a principle that states that energy is dispersed equally among all degrees of freedom. At low T quantization may determine to what extent different degrees of freedom are thermally available. Too cold and only a reduced number of states may be occupied, and there is no equipartition. This is well explained in the wikipedia. The implication for the example you present is that, when compared to a metallic solid with softer vibrational modes, a molecular solid, in which atoms form covalent bonds having large force constants, might be expected to have a lower heat capacity: degrees of freedom corresponding to high frequency vibrational modes that distort covalent bonds can accommodate less energy (on average) at lower temperatures. Such arguments justify some trends in the table below, showing the heat capacity of various solids on a per atom basis (computed from heat capacities from Ref. 1). Sodium azide is a combination of our definitions of ionic solid and molecular solid. For solid sodium azide the heat capacity (on a per atom basis) is $\pu{19.2 J/molK}$, a value intermediate to that of metallic and molecular solids. Note also that $3\text{R} \approx \pu{24.9 J/mol K}$, the heat capacity of a solid (on a per atom basis) predicted by the partition theorem. This value excludes an estimate of an electronic contribution to the heat capacity. 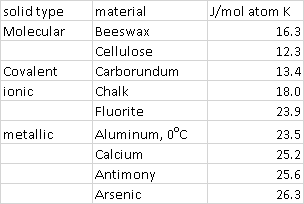 2) Temperature, an equilibrium thermodynamic property: bodies that exchange energy as heat are not in thermal equilibrium, their temperatures differ. The concept of thermal equilibrium also applies to degrees of freedom. For instance, if you (somehow) freeze particular motions (translational motion in a gas, say) you lower the temperature associated with those particular modes. If the system is then allowed to return to equilibrium, heat flows from warmer into the (accessible) colder degrees of freedom.

3) Blackbody radiation, which is intuitively thought of as a "photon gas" in a cavity. The concept of thermal equilibrium can be applied to this "gas". You can consult the wikipedia for more information on these last aspects:

1
Can we define a new unit instead of specific heat that is constant with temperature rise?
8
What causes the colour when conducting flame tests on solid salts?
3
What is the meaning when it is said "Temperature of an Oxyacetylene Torch is 3500 degrees Celsius"?
120
Why is absolute zero unattainable?