I am trying to find chiral centers of molecules in QM9 dataset. Browsing their SMILES representation, I noticed SMILES yield using

don't have @ or @@, but it seems that some of these molecules have alternative representations. For instance, both 'Cc1ccoc1C(C)O' and 'CC@Hc1c(C)cco1' represent the same molecule, but of course the latter one outputs the chiral center:

while only the former is available in the dataset. I found this at https://github.com/chemspacelab/qm9-C7O2H10. Does anyone know if this can be generalized to all the molecules in the QM9 dataset? Thanks!

I don't know about that particular GitHub archive, although I'll point out that the smiles.csv contains several kinds of SMILES - the final column containing the correct SMILES.

IMHO, this is an unfortunate result of people mis-using SMILES. As you note, it's perfectly possible to take a chiral molecular structure and output a SMILES with no stereochemical information.

Take alanine - to a chemist, if you simply say 'alanine,' they immediately think 'amino acid' and translate to L-alanine, or C[C@@H](C(=O)O)N as the so-called "isomeric SMILES": 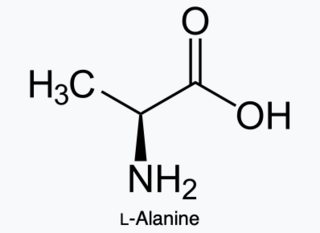 Unfortunately, if you go to PubChem for L-Alanine, you'll see a "canonical SMILES" which sounds official and is CC(C(=O)O)N - no stereochemistry!

The official version of QM9 can be found on FigShare based on the corresponding publication.

Not the answer you're looking for? Browse other questions tagged computational-chemistry chirality cheminformatics machine-learning or ask your own question.