I would guess that such a thing, if it could be created at all, would break up into an molecular oxygen and ozone $\ce{O2 + O3}$ with the electrons doing whatever they please. But sulfate and the heavier VI central atoms don't break up. I've never encountered a good clear explanation about this.

It's not necessary that an element shares some chemical property with all the others in its group. If it did share all chemical properties with the rest of the group, then we could just as well call the elements (something akin to) isotopes of each other. You'd have a pretty boring periodic table then.

What's happening here is that the most striking difference between elements in a group is at play. That difference being the number of electrons.

Our electron shells are broken into "orbitals". Every orbital can hold 2 electrons. $s$ orbitals come in sets of one, $p$ in sets of 3, $d$ in sets of 5, etc. Not every shell is made up of all orbitals--the first shell has only one $s$ orbital, the second shell has $s$ and $p$, and so on. Electrons fill into these orbitals by a triad of rules (which I won't go into here)-- the Aufbau principle, the Pauli exclusion principle (which is implicit in my statement that each orbital holds two electrons), and Hund's rule.

Now, an interesting thing is that bonding can only occur with orbitals with close energies. Thus, if the $4s$ orbital is involved in bonding, the $1s$ orbital will not be.

OK. Now, let's first look at Sulfur's outer electron configuration. There are 2 electrons in a $3s$ orbital, 4 in the $3p$ orbitals (so there is enough space for 2 more electrons here), and you have some "vacant space" in the $3d$ orbitals.

In the sulfate ion: 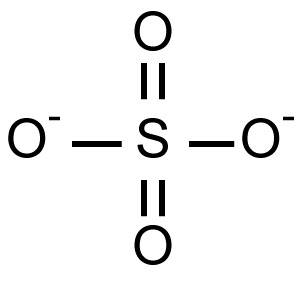 sulfur is "accepting" 6 electrons in this bond. There's some nifty mixing of orbitals that goes on, but basically, those electrons need some place in sulfur's outer shell to hole up--two electrons per orbital as usual.

Since we have 6 extra electrons, we need 3 orbitals. We have one "left over" $p$ orbital, and 5 $d$ orbitals, so we have enough space to accommodate those electrons and form a bond.

OK. Now, let's try the same thing for Oxygen. It has, in its outer shell, a full $2s$ orbital, 2 full $2p$ orbitals, leaving an "extra" $2p$ orbital empty. As mentioned before, the second shell only has $s$ and $p$ orbitals, so there obviously aren't any $d$ orbitals. You've probably noticed the issue here-- we have six electrons and only one extra orbital to stuff them in. This isn't possible, so oxygen never forms $\ce{OO4-}$. The other chalcogens($\ce{Se, Te}$, etc) all have $d$ orbitals in their outer shells, so they have no trouble forming such ions.

Note that I've grossly oversimplified the bonding process, deliberately leaving out a few crucial aspects (which would otherwise take extremely long to explain). If you want to know about the mechanism behind bonding, you may want to read up on orbitals first, then VSEPR theory, and then MO theory.

Not the answer you're looking for? Browse other questions tagged molecules stability or ask your own question.