The concept of normal coordinates of a molecule

Sometime ago I had posted the What is the origin of "normal" in normal coordinates and normal modes? in math & sci history problems. Nobody was sure for the reason for using the word normal there - it was an interesting discussion though. The concept of normal coordinates is transiently brought in vibrational spectroscopy in undergraduate textbooks but rarely explained in detail. Certainly, the concept is borrowed from mechanics.

How can we explain the concept of normal coordinates? What is the need of a new set of coordinates if x, y, z can show also the displacements of an atom from its mean position? Let us take the example of a non-linear molecule like water.

Since I was reviewing this in some detail recently, I will try to supplement Prof. Hutchison's already good answer with some more detail as to why one would choose to work with normal coordinates, rather than the already quite simple Cartesian coordinates.

The short answer is that, under the assumption of small displacements, normal coordinates decouple the vibrational degrees of freedom from the rotational degrees of freedom and make all vibrations mutually orthogonal, such that the total energy of the nuclear motion of the molecule can be expressed as a sum of translational kinetic energy (3 dimensions), rigid rotation at the fixed equilibrium geometry (3 dimensions), and vibrations about the equilibrium geometry ($3N-6$ dimensions).

So, we would like to work with a set of coordinates which circumvents this problem as we can see that it is an artifact of the coordinates we chose from the outset and does not have any useful physical meaning.

As it turns out, it is rather non-trivial to thoroughly show that there is a particular choice of coordinates which transforms the Cartesian coordinates such that the frame of molecular vibrations is fixed and hence eliminates the coupling between vibrational and rotational degrees of freedom. This is where I should mention that, if you like, the Bible of molecular vibrations is the book Molecular Vibrations by Wilson, Decius, and Cross[1]. Chapters 2 and 11 fully motivate and derive the transformation which completes this procedure. The coordinates turn out to be what we now call normal coordinates, and I will only point out that the transformation takes the following form, $$ q_i=\sqrt{m_i}\Delta \alpha_i $$ where $i$ is atom index which runs from 1 to $N$ and $\alpha=x,y,z$, so that we rescale the $3N$ Cartesian coordinates into $3N$ mass-weighted coordinates.

One can show that if you solve Newton's equations of motion using these expressions for the kinetic and potential energy, that one will have to solve an eigenvalue equation where the eigenvalues, $\lambda_k$, correspond to the frequencies of vibration and the eigenvectors correspond to the normal modes, i.e. the actual motion of atoms which vibrate at the the frequency $\lambda_k$.

That is, we want the potential energy to not contain any terms involving more than one coordinate. Thus, we have to determine the coefficient $\lambda_k'$ which makes this transformation.

In Ref. [1], sec. 2-4, this derivation is performed and one finds the marvelous result that $\lambda_k'=\lambda_k$. Hence, one can make this representation of the potential energy diagonal by multiplying by the characteristic frequency which we got from each $q_k$.

Lastly, lest you convince yourself that vibration and rotation are not accounted for anywhere in this, when you solve the eigenvalue I mentioned above, you will find six eigenvalues which equal zero. This is only the case because we made this transformation to mass-weighted coordinates, and these six zeros tell us that six of our degrees of freedom appear to be completely stationary. These are translations and rotations.

So, people work with normal coordinates because they have these nice properties of providing a diagonal represent of the kinetic and potential energies when vibrations are harmonic, and giving a mutually orthogonal set of coordinates with which to work. This is nice because even when we wish to include anharmonicities and other corrections, we have a set of coordinates which have desirable properties and which are a usually a good approximation to the true "vibrational motions" of the system.

I put "vibrational motions" in quotes because it isn't clear that talking about the motions of atoms in a vibrational state is all that meaningful in quantum mechanics, and one can easily find a unitary transformation which causes the motion to look different in Cartesian space, but which leads to the same observable properties.

If we consider N atoms in a non-linear molecule, then each atom can move independently on the X, Y, and Z axes. That's $3D \times N = 3N$ degrees of freedom.

But if I move the whole molecule 3 Å along the x-axis, that doesn't constitute a vibration - it's just a translation. So we have to remove 3 degrees of freedom for translations.

Similarly, if I rotate the molecule along the x- or y- or z-axis, that's not a vibration either. You mentioned water, which is non-linear, so I remove another 3 degrees of freedom for rotations.

I'm left with $3N-6$ degrees of freedom - which are the normal modes of vibration. Your question then becomes "what are those normal modes" (e.g., for water).

Okay, for water, we have $9 - 6 = 3$ normal modes. As mentioned above in a comment, it's not like you can just pull an atom along an x-axis.. As it turns out, the normal modes will be dictated by the potential energy surfaces of the molecule. 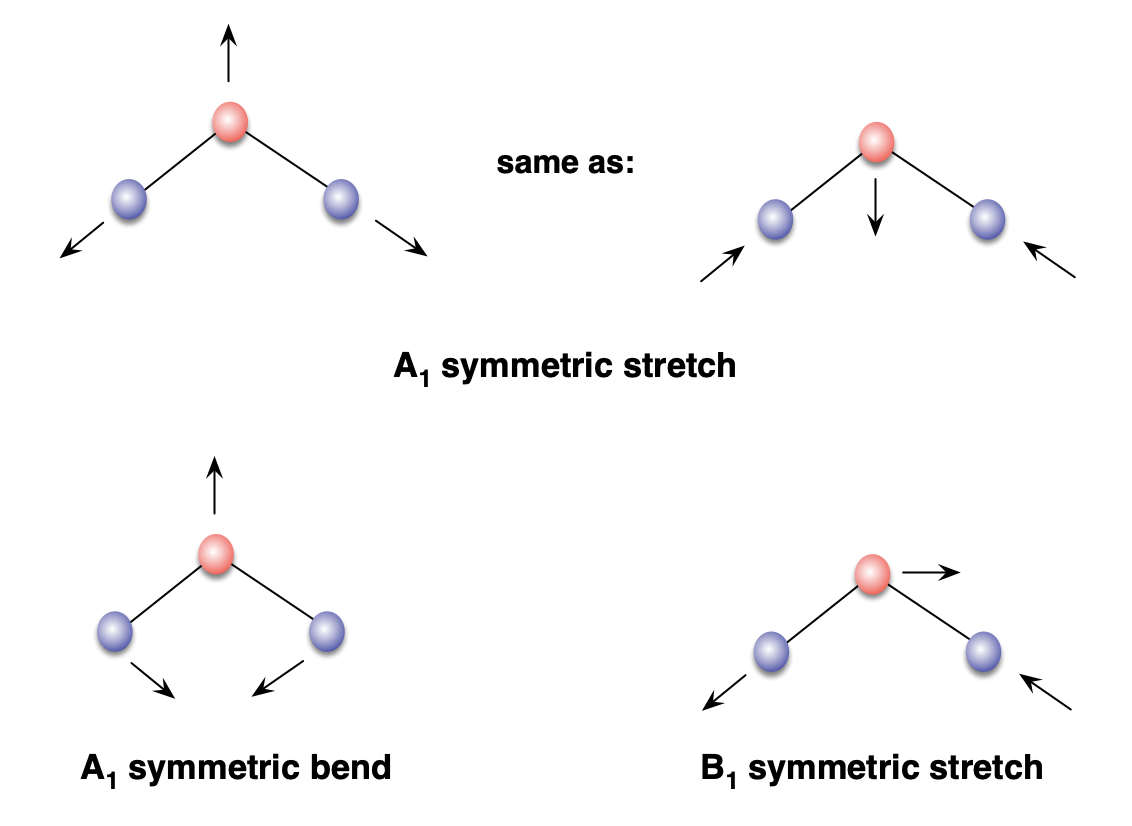 The reason that we use the term is that the Cartesian x, y, and z axes are meaningless with respect to a molecular geometry, whereas the normal modes and thus the normal coordinates are derived directly from the molecular potential energy surface.

There are excellent answers already, but I wanted to address the following question

[...] how would we mathematically define a normal coordinate for the oxygen(s) and hydrogen during a normal mode vibration of water molecule?

For small amplitudes, the bond lengths don't change for the symmetric bend. We can simply define $q_b$ as:

For the symmetric stretch, the sum of the bond lengths changes, so we can define:

For the asymmetric stretch, the difference of the bond lengths is nonzero, so we can define:

This should work for small amplitudes, again. Now, you can express the conformational energy of the water molecule using expressions containing the square of the normal coordinates, separately for each normal mode.

Conversely, we can explore how bond angles and lengths change depending on the values of the normal coordinates:

So you can see that as a first approximation, the normal coordinates are linear combinations of the internal coordinates and vice versa. It gets more complicated if there are torsion angles and tetrahedral or octahedral centers.

Water is a good example for figuring out the logic of normal coordinates on paper. It is neither too simple nor too complex.

Not the answer you're looking for? Browse other questions tagged physical-chemistry quantum-chemistry spectroscopy or ask your own question.

4
Where can I get potential energy surface for simple molecules?
1
Interaction of the oscillating magnetic field of electromagnetic radiation with a molecule or atom
3
Converting fractional coordinates into cartesian coordinates for crystallography
0
Calculating the zero-point energy for the C2N2 molecule