Is there any mathematical or logical proof that carbon with 4 different groups would be chiral?

In chemistry; chirality is generally defined in 2 ways.

Yes, with a couple of simplifying conditions, you can easily show that a tetrahedral carbon with 4 different chemical groups (let's call them 1, 2, 3, 4) is chiral. Let's call the atoms directly bound to the carbon L1, L2, L3 and L4.

So the first condition I will impose is that none of the groups have another tetrahedral carbon with 4 different chemical groups attached.

Tetrahdral should be taken loosely: For the plane defined by L1, L2 and the carbon atom, L3 is on one side of the plane and L4 on the other. The exact angles don't matter.

Showing that the carbon is chiral

see https://proteopedia.org/wiki/index.php/R/S_nomenclature (you have to turn the molecules a bit to have L1 and L2 point in the same direction as L1' and L2')

No, not at all. For trigonal bipyramids there is sometimes pseudorotation, and for ammonia derivatives the trigonal pyramid can "umbrella flip", so these are typically not chiral. If there are four ligands on a central atom and the geometry is square planar, there is no chirality. So a couple of things have to come together to get a chiral center.

I don't think there is any mathematical way to prove it.It's only experimental. See Chirality is defined for the compounds whose mirror image doesn't superimpose on each other. 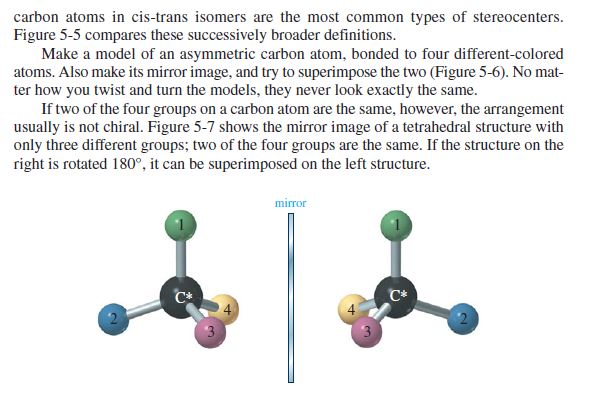 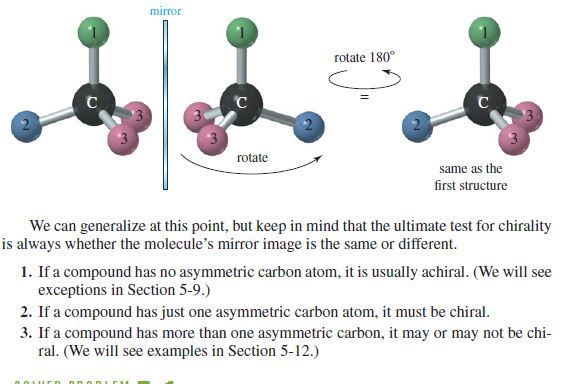 -source : LG Wade Orgainc chemistry. if you want more explanation then you can take help of LG Wade Or Solomons Organic Chemistry(both are available free on net)

Not the answer you're looking for? Browse other questions tagged stereochemistry chirality symmetry or ask your own question.

1
R,S Configuration
7
Does an axis of symmetry determine chiralty?
1
Why was the definition of chiral carbon changed?
12
Mismatch of plane of symmetry vs Gold Book's definition for a pseudochiral carbon
2
Can chiral atoms have same substituents but with different orientations?
9
Are monosubstituted cyclopropanes achiral or chiral?