Are there any datasets containing molecules with more than 38 heavy atoms?

I have been testing a machine learning approach for molecular energy prediction. The current dataset that I have is QM9, which is consist of molecules with up to 9 heavy atoms.

I was wondering if anyone knows of available datasets that contain molecules with large numbers of heavy atoms. I will be testing ZINC, which has up to 38 atoms. Anyone knows of a larger dataset available?

This sounds like you were exploring work at least related to the work by the Lilienfeld group equally hosting a dedicated site here about data sets already used in their earlier and ongoing exploration of chemical space, programs used to work with the data, and publications.

To go considerably higher in molecule count than QM9, you could either go for

Convienently, you can download both -- including sub-sets like «containing only carbon and nitrogen», or «chlorine and sulfur», or «fragrance like» in case you don't want to fetch 2GB of already compressed data -- from the Reymond group. To quote: «All the molecules are stored in dearomatized, canonized SMILES format.»

Initially, I misinterpreted the question but think the answer may be more rounded by addition of the following complementary publication: «Chemical diversity in molecular orbital energy predictions with kernel ridge regression» (J. Chem. Phys. 150, 204121 (2019), doi.org/10.1063/1.5086105, preprint available here). Aiming for a machine-learning analysis, the authors first compared QM9, 44k conformers of proteinogenic amino acids (AA), and a 64k set of organic molecules extracted from the CCDC potentially suitable for organic electronics (OE) for the content of atoms per molecule and found the following distribution: 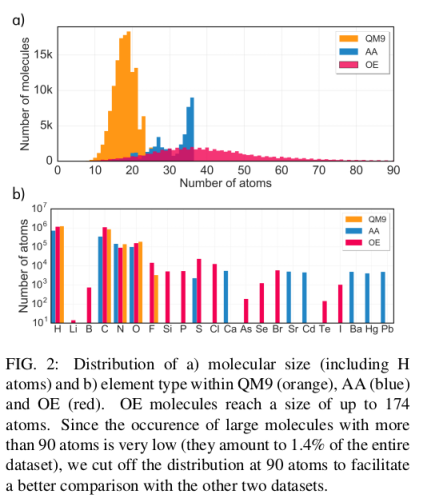 To shed some light on them:

(The mentioned restriction sharing the original data relates to the user agreement with the CCDC.)

Further DFT-based property computations with these OE extracted molecular geometries lead to an ensemble of equilibrium molecular structures, and these derived geometries are accessible within a public Jupyter notebook. Shared with the public here, the deposit comes with a guiding tutorial.ipynb, including an example how to retrieve these optimized geometries and display them with Jmol.

The ISOL24 database (http://www.thch.uni-bonn.de/tc.old/downloads/GMTKN/GMTKN55/ISOL24.html) contains molecules with up to 81 atoms!

The other answer says that there's a database called "OE" with molecules that have up to 174 atoms, but it is "not yet publicly available".

Beyond other answers, I'd suggest the original PubChemQC project, which offers ~3 million molecules from PubChem optimized using DFT (B3LYP/6-31G*). Molecules include a wide variety of elements as long as the molecular mass is less than 500 Da. (Roughly speaking that should still handle ~38 carbon atoms.)

You mention the number of heavy atoms, but keep in mind that QM9 only contains a small subset of elements and ZINC has many more.

3
Why don’t we have a list of all compounds yet?
4
What is the dataset with the largest number of molecules?